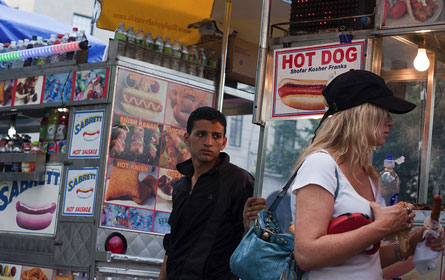 For Moustapha Cisse, 48, setting up shop each morning can be a nightmare.

Cisse is a general vendor; he typically sells handbags and scarves at 51st street and 7th avenue. His table or cart must be within 18 inches of the curb, ten feet from a crosswalk, 20 feet from a store entrance, and on a sidewalk that is at least 12 feet wide. His license must be worn, visibly, on their chest and not covered by scarves or outwear, and he can’t be on top of a subway grate or too close to a pay phone. Cisse’s found a regular spot to peddle his goods, but choosing that location can’t have been easy. In Manhattan, there are at least 160 blocks with restrictions on vendors — some ban vending entirely on certain stretches while others restrict the time of day vendors are allowed.

Deviations from these rules come at a high price. Fines can cost as much as $1000 for each violation; vendors say that fines can quickly put them in debt or completely out of business. Vendors typically make $15,000 - $20,000 a year, according to the Street Vendor Project, the advocacy group that has lead the charge to change these laws.

Two City Council bills are working to fight these hefty tickets and according to lead sponsor Councilman Stephen Levin, they will likely receive a Committee hearing within the next three months.

“We have a lot of support, this is a matter of months,” Councilman Levin said, calling the fines "outrageous."

The bills, Intro 434 and Intro 435were introduced in November 2010 and already have a majority support — 33 and 35 cosponsors, respectively.

“These are common sense, basic fairness bills,” Councilman Levin said. “[Vendors] are extremely hard-working. These people are trying to put food on the table for their families. For someone to get a $1000 fine for a minor infraction goes against a lot of what we believe in this city.”

“It’s not doing the city any good to issue such outrageous fines because it just ensures that the people aren’t going to be able to pay them,” Levin said.

The two Council Bills proposed by Councilman Levin already have a majority number of cosponsors. The first bill, Intro 434, has 33 cosponsors and would lower the minimum ticket to $25 and set the maximum fine cost at $250 and Intro 435, which as 35 cosponsors, would stop the ticket price for rising for unrelated violations, meaning that the fines only rise if the tickets are issued for the same violation.

The 2010 IBO study that investigated the issue also found that the regulation of vendors was costing the city money. In fiscal year 2009, street vendors cost the city approximately 7.4 million, though only $1.4 million was collected in revenues.

Mohammad Anu Miah, 50, emigrated to the U.S. from Bangladesh in 1998 has been selling hot dogs in SoHo since 2002, but this year he lost his license because he owes $4,513 dollars in fines but doesn’t have the money to pay it. Some of his fines are health code violations — something these bills wouldn’t affect — but one $1000 violation is for vending on a sidewalk less than 12 feet wide.

Miah says he can’t find other work and still owes the money to the city. Sometimes he can’t afford to eat and since losing his license, he’s been unable to send money back to his wife and six children in Bangladesh.

“They refuse to admit that there are ticket quotas, but I think it’s pretty publicly known that there are,” Shapiro said. “Vendors are easy targets â€“ they’re out their on the street, a lot of them are immigrants and they don’t speak great English. It’s hard for them to protect themselves.”

Vendors report that arguing with the cops or trying to show that they are in fact abiding the law only leads to more tickets.

“The lesson I’ve learned is don’t talk,” said Cisse, who said he thinks he’s been targeted by cops. Cisse still has his license, but is in debt to a friend after he had to borrow money for a $750 ticket last year.

Vendors report wide disparities in enforcement. Street Vendor Project explains that the regulations for vendors are so elaborate that many cops can’t keep them straight.

Wanda Foster, 46, was fined for being less than 90 feet from a Subway while selling fruit. Even when she said she used a tape measure to show the cop that she was a full 90 feet from the subway entrance, she still received a ticket. But the law only says vendors have to be ten feet from the subway, according to Matt Shapiro, the staff attorney at the Street Vendor Project.

And while vendors can fight these tickets, Shapiro said that most don't know how to appeal the decisions and language barriers often hurt their attempts. The Street Vendor Project often appeals tickets, but they are rarely successful in getting the ticket reversed.