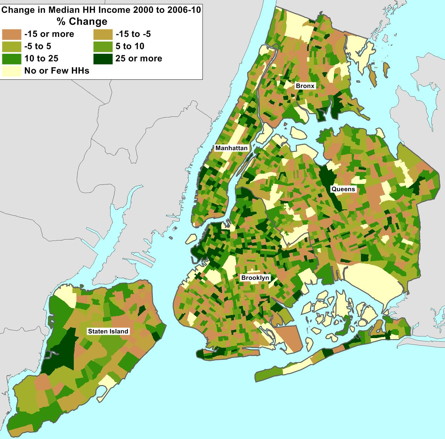 The map is an example of data available through the American Community Survey. It shows median household income from 2000 to 2006-2010. Maps courtesy Social Explorer.

Starting in 2005, the U.S. Census Bureau replaced the long form that the agency had relied on every 10 years to measure change in the nation's demographics with an annual survey that would deliver a much more immediate snapshot of the population. Now we have data that were available only once a decade, every year.

Today, the American Community Survey is used across the country by researchers, businesses and policymakers. Almost anything that a person would want to know about the population of the U.S. â€“ from income to disability â€“ can be found from a review of the data.

For New York City or, for that matter, any community across the country, the ACS is a critical tool for understanding demographic change down to the neighborhood level.

Given its importance, then, it might come as a bit of a surprise that the Republican majority in Congress wants to get rid of the ACS â€“ and has even put forward an amendment to do so â€“ arguing that it represents an unconstitutional invasion of privacy.

“It would seem that these questions hardly fit the scope of what was intended or required by the Constitution,” said Rep. Daniel Webster (R-Fla.), author of the amendment.  "This survey is inappropriate for taxpayer dollarâ€¦ It’s the definition of a breach of personal privacy. It’s the picture of what's wrong in Washington, D.C.”

It should, perhaps be noted, that there is no documented case of identifiable Census information falling becoming public or being used in an unauthorized way.

Compared to the data harvested by Facebook, Twitter, Apple, Amazon, Google, your credit card company and your healthcare provider, Census information is mostly quite benign.  However, the ACS does collect information about race, ancestry, income, and marital status. 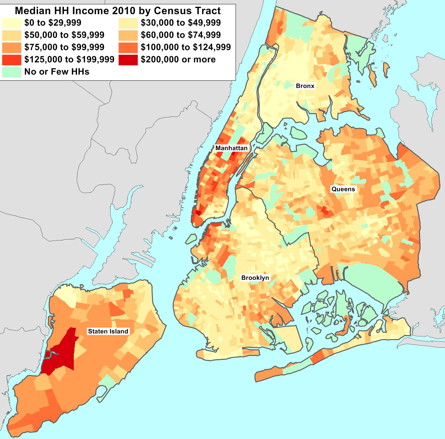 While the survey is not part of the constitutionally mandated population count, some version of it has been done by law as part of the decennial survey since the time of Thomas Jefferson. Virtually all questions on the current survey are there because of various Congressional mandates.

There has been an outpouring of support for the ACS, including from the editorial pages of the Wall Street Journal: “Since the political class is attempting to define the GOP as insane and redefine â€moderation’ as anything President Obama favors, Republicans do themselves no favors by targeting a useful government purpose.”

The Times, in another editorial, pointed out that Webster has a link to ACS data about his district on his own website.

The outright ban is not expected to pass the Senate, but a bill making the ACS voluntary has been introduced there, and has already passed the house.Making the survey voluntary is certainly a possibility and would make it both more expensive to administer and less accurate and valuable, based upon the experience of Canada, which made a similar survey voluntary.

It is also possible that the House GOP will stick to its guns in committee and the Democrats will let the ACS be killed or compromised.

A recent workshop sponsored by the Committee on National Statistics of the National Academy of Sciences highlighted several hundred uses of the ACS, outside of the US government. Commercial users include Target Stores, Wal-Mart and others, as well as virtually all marketing research firms, political pollsters and so on. (The presentations are available here.)

Many of the Federal uses are mandated â€“ including looking at commuting patterns to help plan transit facilities; understanding the affordability of housing; allocating funds for community block grants; allocating funds to school districts with high levels of poverty or immigrants; providing language assistance for voting; and assessing the need for free or reduced lunch at public schools.

Here's just a sampling of the ways that the ACS can be used to show important demographic change in New York City:

But forget about knowing all that if policymakers do away with the ACS.  Politicians and researchers will know a whole lot less about who resides in the country, how they are faring and how the country is changing.

This may be the way the GOP House Majority would prefer it â€“ so that politicians and commentators can make their appeals based upon opinion with no chance of contradiction or fact-checking.  Of course, they point to cost-saving to tax payers and its supposed impact on privacy.

But the ACS’s demise will deprive the city and the nation of a major source of important information that researchers have relied on for decades.

It would be like asking astronomers to do astronomy without telescopes and physicians and biologists to work without microscopes.

____
Andrew A. Beveridge has taught sociology at Queens College since 1981, is the president and co-founder of Social Explorer, a premier on-line demographic web site, done demographic analyses for the New York Times since 1993, and been in charge of Gotham Gazette's demographics topic page since 2000. The opinions expressed are his alone.