Poverty in the United States is defined based upon a formula created in 1963 by Mollie Orshansky. She figured out what income would be needed to purchase the minimum level of food needed for a family. Food was the only area where a clear minimum standard existed. She then multiplied that amount by approximately three, based upon a survey that showed that low-income families spent about one-third of their money on food. Though it has been slightly revised since then, the only real changes have been adjustments for inflation. The thresholds are the same throughout the United States, so those deemed to be “officially” poor in Peoria have the same income as the poor in New York City without regard to different living costs.

A series of other approaches to poverty lines have been proposed,each of these measures giving slightly different results, but no consensus has been reached on what should be the standard gauge.

WHO IS MORE LIKELY TO BE POOR?

Families headed by women with children under 18 are more than twice as likely to be poor (44 percent) as are all families (18.5 percent). Support for elderly through social security has massively reduced the poverty of the older Americans, while poverty among children has increased over the last 30 years: 17.8 percent of New Yorkers over the age of 65 live in poverty, but almost one-third of all children do so.

Many people who are poor at one time do not stay in poverty very long. Indeed, for most people poverty, like unemployment, is episodic. For instance, a student graduates from college and does not immediately find a job. Before finding one he or she might live in poverty. One person loses a job and needs time to find another. During that period that person may have little or no income and might be living in poverty. In such cases, however, official poverty is likely to be short lived. Studies have shown that household dissolution (caused by divorce, death, abandonment, etc.) is the number one cause of poverty, especially for women and children. Job loss is the second major cause of poverty.

When people talk about poverty as a problem usually they focus on the “persistent poor,” those who were born poor and remain poor. Indeed, social scientists (such as several at the Urban Institute) have identified a series of characteristics in the areas where the "persistent poor" are likely to live. These factors include:

Such factors contribute to high levels of urban crime, drug sales, and other urban ills, including graffiti, litter and a lack of neighborhood social control. Abandoned cars, check cashing establishments, advertisements for 40-ounce malt liquor adorn such neighborhoods. Often there are public housing project and high concentrations of minority members.

WHERE ARE THE POOR? 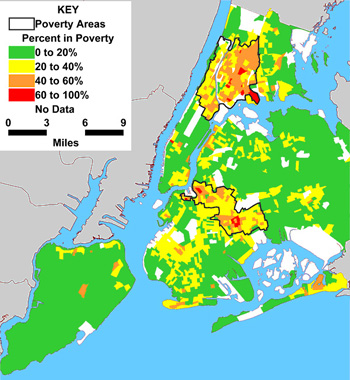 Since many poor are not poor for very long, the levels of segregation among poor residents are not that great. Nonetheless, New York City has two areas of concentrated poverty, as shown in the accompanying map. The first is the broad expanse of Northern Manhattan, including Harlem up into the Bronx. This area contains many African Americans and Latinos (especially Dominicans and Puerto Ricans). The other area is centered on Flatbush and Bedford Stuyvesant, also an area with many African Americans and Latinos. (It is important to point out that many Latinos are not impoverished, and there are many areas in New York City with affluent African Americans, including Southeast Queens and Northeast Bronx). The major “poverty areas” contain neighborhoods that traditionally are seen as containing “ghetto poverty,” where the persistent poor are more likely to make their home.

Areas in the South Bronx and areas in and around Bedford Stuyvesant have contained large concentrations of poverty for decades. Nothing that happened in the 1990s changed that. In fact, the poverty population in New York City grew. The 1990s boom did not trickle down enough to pull such New Yorkers out of poverty. The current economic downturn will only serve to exacerbate the problems of the poor and produce more poor people.