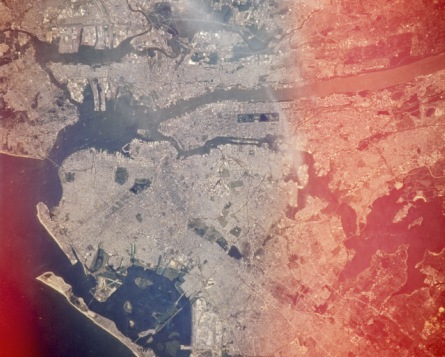 Editor's note: This commentary is based on the preliminary lines that were released before Thursday night's meeting by the Districting Commission. We will be updating it with additional information as it is released.

Much is at stake, not for party control, but over who will represent many of the city’s increasingly diverse neighborhoods for the next decade beginning with the 2013 election. Redistricting must be undertaken after each federal decennial Census.

The city's Districting Commission, appointed by the mayor and Council leaders to redraw the lines, voted unanimously in favor of a revised plan at a public meeting Thursday night. The new map has not been made available for review. The full City Council must now approve it.

Unlike the state, the city has a non-legislative redistricting commission, which has held hearings and presented preliminary maps of the boroughs.

But since they are appointed by the mayor and the Council, it is perhaps unsurprising that the commissioners charged with redrawing the city's districts would follow the age old practice of “incumbency protection”: In the draft map that was released before Thursday's vote on a revised plan, district lines were tweaked at the expense of splitting some neighborhoods. This is a classic example of protecting those already in office by minimizing the amount of change within district lines — after all, probably the worst thing that can happen to an incumbent is to force him or her to run in a new district.

This seemingly business-as-usual approach appears to be in stark contrast to the Districting Commission’s efforts to be transparent about the process, allow for community input at hearings in the various boroughs and through an invitation to members of the public to submit their own proposed maps. Nevertheless, the proposed maps have been criticized for dividing neighborhoods and ignoring communities of shared interest.

The Unity coalition of minority advocates — including LatinoJustice PRLDEF, Asian American Legal Defense And Education Fund, and Center for Law and Social Justice at Medgar Evers College — presented a common plan that attempted to keep neighborhoods intact and attempted to maximize the influence of African Americans, Latinos and Asian Americans on the new Council. Most of their suggestions were spurned, likely because many of them would have made it much more difficult for incumbents to keep their seats, or would have forced incumbents to accommodate themselves to new neighborhoods.

Despite the outcry from the Unity coalition and other groups, the Commission has proposed a plan that is basically same-old, same-old. 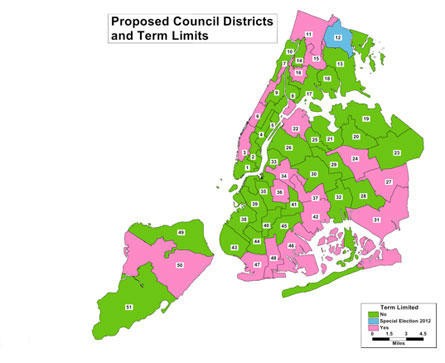 The above map presents a preliminary view of the new Council districts, along with whether or not the current incumbent is term limited. Click to enlarge. Courtesy of Social Explorer.

To successfully complete redistricting and not be subject to challenge under federal law, the following principles must be followed:

The fifth provision is very important in New York City, since the Bronx, Manhattan and Brooklyn are subject to pre-clearance by the U.S. Department of Justice.  One of the main issues with pre-clearance relates to retrogression, meaning that the number of seats with a majority of the various minority groups from the 2003 districts must result in the same number or more seats unless population change makes this impossible.

It is this last point that has created the presents the biggest challenge to the Commission’s map-making.

Current Districts and Need for Change

Since redistricting is like putting together a jigsaw puzzle, that 12 seats need to be adjusted, means that many more than that will be impacted, because the extra population to be added or subtracted from these 12 districts will need to come from or be put elsewhere. So substantial redistricting was necessary.

The Council currently has 2 Asians, 15 blacks, 8 Latinos, and one Black/Latino Councilman. But non-Hispanic whites make up 25 of the 51 seats in the Council. In terms of minority majority seats, the new Council will have nine majority Latino seats, 11 majority African American seats and one seat that is almost majority Asian. There are 21 non-Hispanic white seats and nine with no majority. Of those nine, five are plurality non-Hispanic white and four are plurality Hispanic. Based upon proportional representation by seats, the current Council is over-performing in returning minority districts.

>>>View a table about the new districts under the preliminary plan, including the incumbent, the year elected, term limit status, voting age, citizenship, race and Hispanic status.

The Unity coalition proposed a plan that would result in one more majority black district and one less majority Hispanic district. The Unity coalition asserts that their plan divides fewer neighborhoods. Such changes would be even more disruptive to the current set of incumbents, so was not seriously considered.

Based upon simple block voting, one might expect fewer black seats and more Hispanic seats. However, the last time that there were a large number of term-limited Council members, the vast bulk were replaced either by staff aides or family members. Few community activists or others could not find the wherewithal to win and sometimes to remain on the ballot.

One should expect that the 2013 election will be no different. Given the limited nature of the redistricting, I would expect that the new Council will maintain just about the same demographic profile as the current Council despite both population shifts and term limits.