November 17, 2012 | by Andy A Beveridge and Cristian Salazar 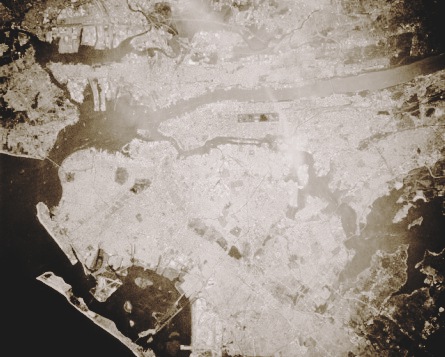 But the Districting Commission was criticized for voting to approve the new plan at a meeting Thursday night before it had even released the information to the public. The full City Council must now approve the new map.

Since the commission also supplied an analysis related to the Voting Rights Act by Lisa Hadley, a renowned expert in that field, it is clear that the revised plan had been crafted days ago and could have been released at the Commission’s discretion. 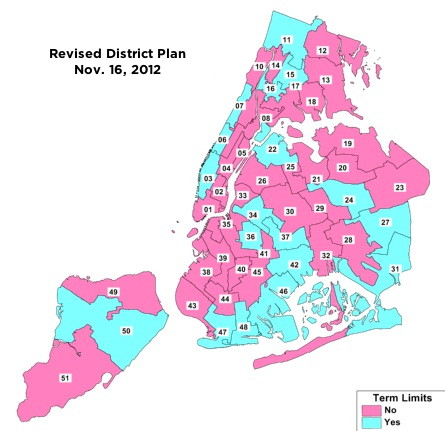 The above map presents a view of the revised plan for new Council districts, along with whether or not the current incumbent is term limited. Courtesy of Social Explorer.

It took until Friday afternoon for the revised district plan to be posted on the Commission’s website for the public to view it.

Asked why the map was not released to the public before the Commission voted to approve it, the Commission’s executive director, Carl Hum, said there was still time for the public to make its comments on the plan.

“If there is a desire by the public to have more hearings, they can certainly voice that to the Council,” he said. The Council could also reject the lines, forcing the Commission to hold another hearing. “The process is far from over.”

He said that the new map was drawn taking into account comments from the public, civil rights groups and legislators, as well as maps created by members of the public.

Responding to criticism that the lines had been drawn to protect incumbency, he said legislators’ also had a stake in the process. “While not saying that's the primary consideration, or the overarching consideration â€¦ It is part of the toolkit,” he said.

>>>>Read Andrew A. Beveridge's analysis of the preliminary maps and how they protect incumbents.

Unlike the state, the city has a non-legislative redistricting commission, which has held hearings and a series of maps.

The commission consists of 15 members — seven appointed by the mayor, five by the Council Democrats and three by the Council Republicans. One third of the commissioners are from Manhattan, which has about one-fifth of the population, two from the Bronx and Brooklyn each, and three from Staten Island and Queens each.

Nevertheless, the proposed maps have been criticized for dividing neighborhoods and ignoring communities of shared interest.

>>>View a table about the new districts under the revised plan, including the incumbent, the year elected, term limit status, voting age, citizenship, race and Hispanic status.

The Unity coalition of minority advocates — including LatinoJustice PRLDEF, Asian American Legal Defense And Education Fund, and Center for Law and Social Justice at Medgar Evers College — presented a common plan that attempted to keep neighborhoods intact and attempted to maximize the influence of African Americans, Latinos and Asian Americans on the new Council.

In a statement released after Thursday night’s vote by the Commission, AALDEF noted that under the new proposed map that several Asian American communities remained divided but that some of the Unity Map’s suggestions were taken into account.

Jerry Vattamala, a staff attorney with ALDEF, said in a statement that the Commission’s proposed map “has room for improvement in enabling New York City’s federally protected communities of color to have an equal opportunity to elect candidates of their choice.”