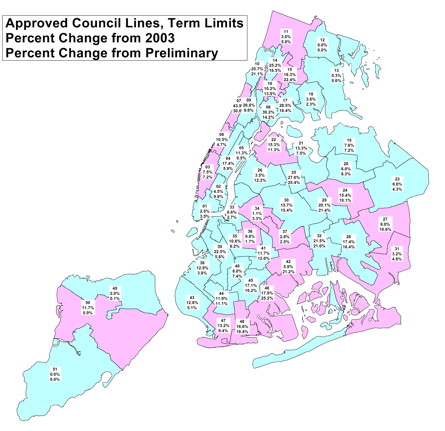 The next City Council will likely be demographically similar to the current one, though there may be an increase in both Asian and Latino membership.

That is one of the main takeaways from a review of the new Council lines approved by the city’s Districting Commission on Thursday but not released to the public until the following day.

A further look at the plan shows that it continues to protect incumbents, but was adjusted to accommodate some of the preferences of community and minority group advocates and others who complained loudly about the preliminary plan.

In addition, Lisa Hadley, a noted analyst of voting patterns in the context of redistricting, assessed the plan for any vulnerability to challenge by the Department of Justice and by Minority Voting Rights advocates and found that it unlikely to raise any issues.

Overall the plan continues the time honored tradition of incumbency protection, but it is worth noting that such concern for incumbents has been found by the Supreme Court to be a legitimate basis for redistricting.

However, there were noteworthy changes to districting lines that addressed concerns of critics.

There was also substantial change between the current lines and the final lines, in Queens for Districts 25, 29, 32, and for District 39 in Brooklyn. Districts 25, 29 and 32 were modified substantially from the preliminary plan.  Along with District 28, these changes satisfied some of the issues raised by the Asian American Legal Defense and Education Fund.

Nonetheless, the basic pattern except for the 10 districts noted, was for a plan that would serve to protect the incumbents or their likely successors.

Like many southern states and counties, the Bronx, Manhattan and Brooklyn are subject to so-called pre-clearance by the Department of Justice.

This is to ensure that any changes to the voting system do not disadvantage minority groups:  African Americans, Hispanics and Asians.

Generally a plan is tested to see if there is retrogression, which means that one would expect that fewer seats would be held by candidates of choice of minority groups.

The commission hired Lisa Hadley to conduct an analysis to assess whether the final plan met such a criterion. (I should note that in several cases, including a recent case in Port Chester, Lisa Hadley and I testified for the same parties. My work was more in formulating and analyzing the demographics of redistricting plans, while Lisa Hadley analyzed voting patterns.)

Hadley’s analysis finds that the plan passed by the redistricting commission preserves at least the same number of seats, where minorities will elect their candidate of choice compared to the current plan in the three covered counties.

I agree with Hadley on this, the plan will return a Council very similar demographically to the current council, though their may be an increase in both Asian and Latino membership.

Redistricting for any jurisdiction is a series of tradeoffs among incumbency protection while following the five principles I outlined in an earlier column.

How these principles, along with incumbency protection, are implemented in practice depends on who is doing the map drawing. Redistricting is a bit like completing a jigsaw puzzle. All territory must go somewhere.

New York City redistricting is done by a Commission where a majority of members are appointed by the Council, while many of the mayoral appointees also have been very active politically. Though not exactly the same as being drawn by the Council itself, the Council still must approve the plan, and those in charge of drawing the map are beholden to the Council for their appointments.

If we had true non-partisan (as opposed to bi-partisan) redistricting in New York City, I am sure that incumbency would not play such a large role. (Indeed, it played little or no role in California, where the state’s recent redistricting was done by an independent non-partisan commission.)

Unless New York City adopts such a procedure, we can expect that the choice of constituents will still be shaped by the incumbents more than by the voters.