As a recent court case makes clear, the Afghanis who fled to New York City do not seem to have entirely escaped the turmoil back in Afghanistan, one of the poorest countries in the world, and one that has been wracked with both internal divisions and external invasions for most of the last 25 years.

Shortly after September 11th, 2001, Imam Mohammed Sherzad, the spiritual leader of the Hazrat-I-Abubakr Sadiq Afghan Mosque in Flushing, accused the founders of the mosque of supporting the Taliban, and in effect kicked them off the premises. The founders accused the imam of making up his accusations in order to take control of the mosque. They sued. Last month, a state supreme court justice reportedlyreturned the mosque to their control.

The case offered a glimpse into a community that seems nearly as divided here as in Afghanistan. And, thanks to the U.S. Census Bureau, which for the first time released data on 89 so-called ancestry or ethnic groups from the 2000 census, we can begin to piece together a demographic portrait of this complicated community as well.

The census found about 9,119 individuals of Afghan ancestry who live in the New York metropolitan area, a figure far smaller than the 20,000 normally cited. Of course, the census bureau may have missed some Afghans (as many as 30 percent), but it also likely that the higher figure is an exaggeration.

About two-thirds of the Afghanis were foreign born. Most left their homeland because it was no longer safe. Of these, more than half fled the Soviet invasion starting in 1979. Others fled when the Taliban militia took over in 1996. Still others fled during or after our bombing of Afghanistan in 2001 and 2002. These three groups may well have very different views.

The Afghanis in the city are relatively poor, with a median household income in 2000 of about $25,000, compared to about $38,000 for all New Yorkers, and about $50,000 for Afghanis in Long Island. Afghans are highly concentrated residentially in and around Queens, especially Flushing, as shown by the accompanying map. 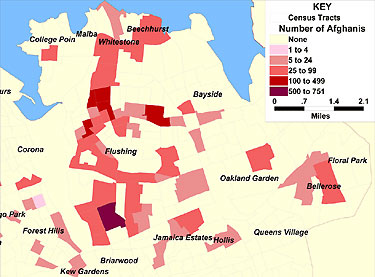 Manizha Naderi, the director of Women for Afghan Womenreports that before some Afghani women are allowed to go to the ESL class sponsored by her organization, their husbands check it out to make sure that the class is not being run by a communist or Catholic organization. The organization also helped to sponsor a conference in Kandahar to write a Bill of Rights for Afghan Women that was supposed to have been made part of the new Afghan constitution. Despite many promises, it was never added. Many Afghanis in the New York City would agree that Afghan women should not have a Bill of Rights.