Though it is common to call New York City a Democratic town, Democrats are actually in the minority. In election after election, the solid majority is made up of non-voters.

So who are these non-voters?

As the accompanying map shows, the areas with the smallest proportion of non-voters are in Manhattan, including the Upper East Side, the upper west side and areas south of 59th Street. 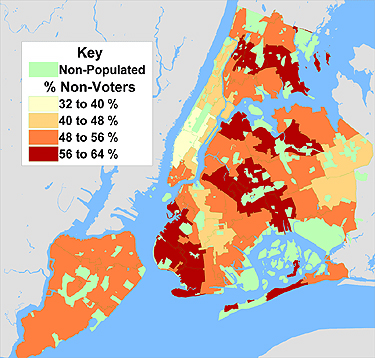 The highest proportion of non-voters live in

In short, there is no direct relationship between economic distress of an area and non-voting among those eligible.

Every two years after every national election, the United States Census Bureau asksa representative sample of the US population if they voted. Using those data for the period after the 2000 Presidential election one can get a picture of those who do not vote even for President. (Of course asking someone whether or not he or she voted is likely to elicit a certain amount of lying. Indeed, about 55 percent of those sampled claim they did vote, about seven percent more than those who actually did.)

Those in higher status occupations and those with college degrees voted at a higher proportion than others eligible (68 to 55 percent).

Those married with spouse present, as well as those widowed, divorced or separated voted at much higher rates than singles or those living without their spouse. Those born in the United States were slightly more likely to vote, while those from Puerto Rico were slightly less likely to vote.

Though some demographic and other groups do vote at a somewhat higher rate than others, it is nonetheless the case that for virtually every population category non-voting is rampant. This is all the more true in non-Presidential contests, even when a handful of votes would make a difference.