Think “New York Lawyer” and it is easy to picture a partner who earns $1.391 million a year (which was the average compensation for a partner in a top New York law firm in 2003, according to the American Lawyer). Even first-year associates â€“ people just out of law school â€“ can make up to $150,000 a year. The top earners make more than anywhere else in the United States, and there are so many more of them in New York. The largest New York firm, for example -- Skadden, Arps, Slate, Meagher & Flom -- employs some 1,700 attorneys, 350 of whom are partners who each made $1.6 million last year. Is it any surprise that New York is often seen as the major center of the legal profession.

But there were 57,000 practicing lawyers in New York City in the year 2000, according to the U.S. Census, and, as several recent stories make clear, they are not all doing the same thing. The Legal Aid Society, the “main legal provider for New York City’s poor,” as it was described in a recent New York Times article detailing how it was recently saved from bankruptcy, employs 1,396 people (not all of them lawyers of course). There are many other non-profit legal service providers; three recently received a court victorythat will allow them to serve their poor and immigrant clients more effectively, according to Newsday â€“ making it easier, for example, to file class action lawsuits.

So what would a portrait of New York lawyers really look like?

WHERE DO NY LAWYERS LIVE?

Nearly half of all New York lawyers work in Manhattan.Only a quarter live there.

So where do the rest live?

More than half live in the suburbs. Chappaqua, Hastings-on-Hudson, Rye and Scarsdale have high concentrations of lawyers, as does Newstead, New Jersey. In Long Island, the North Shore (Great Neck and Manhasset) and South Shore (Hewlett Bay Park and Hewlett Harbor) of Long Island have relatively high concentrations.

Interestingly, the highest concentration of lawyers living in New York City is in Forest Hill Gardens, a community with private streets just beyond the LIRR tracks and east of 71st Street in Queens. 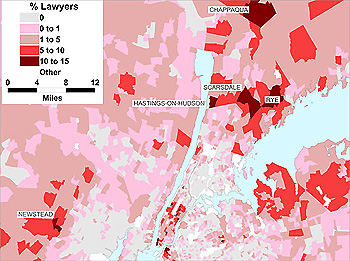 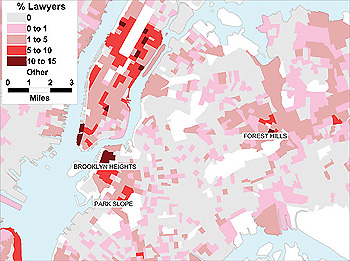 WHAT IS THEIR ETHNIC MAKEUP?

Of the 57,000 lawyers practicing in New York City in 2000, 87 percent were white; only six percent were black. Compare this to all New Yorkers who have at least a B.A. and are employed â€“ 70 percent of these are white, and 12 percent black.

Eighty-seven percent of New York lawyers have always lived in the United States, and 84 percent speak English at home. Over 60 percent of lawyers are married and living with their spouses (compared to 50 percent of the employed college graduates as a whole), and 62 percent own their own residences. New York lawyers may be diverse, but it is clear they are more affluent than average.

The median income for New York Lawyers in 1999 was $100,000. That means that half made more and half made less. This vastly exceeds the $46,000 median income for other employed college graduates. More recent data suggest some modest increases for both lawyers and others. In the 1990s for the US as a whole, lawyers median income exceeded that of doctors for the first time. This is also true in New York City, where the median income of physicians is $80,000.

The census did not release information about the actual earnings of those making more than $627,000. Such respondents were “top-coded,” their income was reduced to a figure that represented the cut-off for the top three percent of all earners. The American Lawyer does published data on the top 100 law firms in the United States, the Am Law 100. Using those data, one finds that the 3,276 partners (about seven percent of New York’s lawyers) of the 23 New York firms making that list split about $4.6 billion dollars in 2003, for an average compensation of $1.391 million dollars. The average was highest at Wachtell, Lipton, Rosen and Katz, where the 78 partners averaged $2.585 million. Indeed, 18 of the top 23 firms had average partner compensation in excess of a million dollars.

Included among these lawyers are the public defenders, the legal aid lawyers, the prosecutors, as well as those working for various public interest entities, such as the ACLU and others.

So, clearly, a monolithic image of the New York lawyer is just as inaccurate and unfair as most lawyer jokes. Of course, the trouble with lawyer jokes is lawyers don't think they're funny, and nobody else thinks they're jokes.

Andrew A. Beveridge has taught sociology at Queens College since 1981, done demographic analyses for the New York Times since 1993, and provides expert testimony on a range of cases, including housing discrimination. The opinions expressed are his alone.Â