Affordable housing has been one of the few concrete campaign issues this year; every candidate seems to have a plan. But is it possible to satisfy the need for affordable housing in New York City? Usually housing is considered unaffordable if it costs a household more than 30 percent of its income. With that definition, about 1.1 million of the 3 million households (36.7 percent) are living in housing that is not affordable to them. In fact, over 600,000 (19.9 percent) spend more than 50 percent of their income on housing. By reviewing housing databased on the U.S. Census from the federal Department of Housing and Urban Development, one can understand just how unaffordable housing is in New York City.

The department has determined that the median income for a family of four in 2000 was $52,100, and it labels income as "low," "very low," or "extremely low" depending on how far income falls below that median.

Slightly less than half of all households in New York City are considered low income (anything $41,700 or below for a family of four), and most of them must pay a large percentage of their total income to obtain housing -- whether they are renting their home, or own it. Almost two thirds of these households spend more than 30 percent of their income for housing. Almost two-fifths spend more than 50 percent on housing.

It is important to emphasize that New Yorkers spend a large amount on rent even though New York City is one of the few places in the United States with rent regulation. It also has a very large number of its residents living in public housing or availing themselves of other federal subsidies, and there are also such housing programs for the middle-class as Mitchell-Lama housing. Yet, when compared to the 107 places in the United States that have at least 100,000 housing units, New York City ranks first in the proportion of "low income" residents who pay more than 50 percent of their income for housing costs, and ranks fourth for all residents whatever their incomes who pay more than half, following Miami, Los Angeles, and San Juan, Puerto Rico. The accompanying map shows the distribution of those households who pay more than 50 percent of their income throughout New York City. 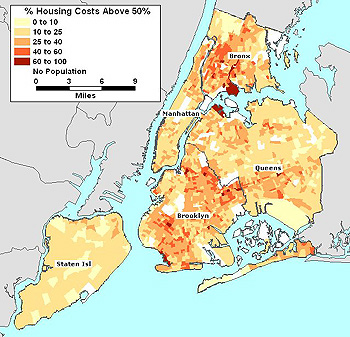 Housing cost burdens are highest in areas of most poverty. An earlier columndefined the areas where the poor live.

These areas, include, the following:
â€˘ The Bronx, including the South Bronx; part of Harlem;
â€˘ Brooklyn, including the area around Bedford Stuyvesant and Flatbush, as well as some parts of Greenpoint and Williamsburg,
â€˘ In Queens, some areas of Jamaica.

Many of the residents living in these areas are either in a housing project or have a housing subsidy, yet they still spend a very large amount of their income on rent.

The conclusion is inescapable: Many low income New York City residents cannot afford the homes in which they are living. For all the publicity in the mayoral race given to affordable housing plans, given the scope of the problem, these amount to little more than token developments for a lucky few. Â