Over one million New Yorkers between the ages of 21 and 64 are officially disabled, based on the classifications established by the Americans With Disabilities Act.

According to recent Census reports, about a quarter of all New Yorkers within that wide age group living on their own say that a physical, mental or emotional condition lasting six months or more has made it difficult for them to:

Dress, bathe or get around inside the home

Or, work at a job or business

The most common impairments concern something that affects the ability to work or to go outside the home.

It is the objective of those who provide services and aid to the disabled to make it easier for them to live a full life. For this reason, providing disabled New Yorkers with transportation becomes very important. Though bus-riders in wheelchairs have become a common sight, there is no other mode of transportation in the city that is as accommodating; as a result, too many disabled New Yorkers feel as if they are trapped in their homes. 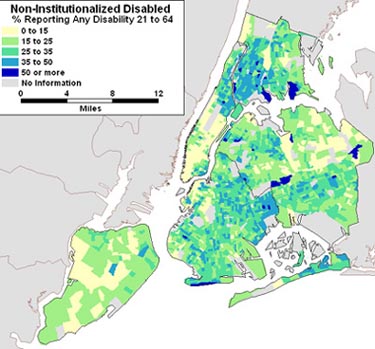 The areas with the highest rates of disability include the Bronx and Washington Heights, Elmhurst, Bellerose, Brighton, Borough Park, Long Island City and East New York. These areas have high concentrations of minority and poor residents, and some have a high concentration of immigrants.

The disabled are less likely to be white and more likely to be black than the rest of the population. A higher proportion of the disabled are born abroad and do not speak English as their first language. They are less educated: Only 17.3 percent spent four years in college compared to 33.4 percent for the rest of the population at large. They earn less money -- $23,500 median versus $30,000 for the rest, and are more likely to be in poverty.

Is The Boom Over Or Not?

There have been three recent demographic reports that together do not make very much sense.

1. Sam Roberts of the New York Times recently reported that the Census Bureau “ officially listed the city's population at 8,168,338, another record high.” He attributed this to the expert “sleuthing” of city officials.

2. The Pew Hispanic Center study found that the “inflow of newcomers peaked between 1990 and 1995, gradually declined as other states were peaking, and fell again after 2001, to about 90,000 annually, down from 168,000 in 1990. The vast majority of immigration to the state is concentrated in New York City.”

3. A study done I did showed that the top fifth of the population in Manhattan had average incomes over 50 times that of the bottom fifth.

So is the city booming or is the boom over?

During the 1990s, it is plain that high income and the availability of jobs coupled with better counting did lead to the population growth found in New York City. Immigration fueled this growth. Immigrants also tend to accept lower wages and incomes for the same work, so New York City has what some call an hour glass economy -- with a large top and bottom and little in the middle. There are the Wall Street workers, and the people who deliver their food to them. The cooks and the deliverers are immigrants; their customers are very wealthy.

But the Pew study indicates that immigration growth may have ended in the 1990s. So, how can New York City’s population still be growing? The simple answer is that maybe it isn’t â€“ maybe simply the census bureau is doing a better job of counting the population.

Next year, however, we will have the benefit of the first full-blown large scale on-going survey from the bureau. If all goes according to plan, we will know how large is NYC’s population, and how much money New Yorkers are making â€“ whether, in other words, New York is still booming.