More than two months after the end of the three-day New York City transit strike, both the attention and the tension have dimmed. But there is still no settlement in place, and indeed some transit workers have signed a petition to vote again on the contract that had been rejected on January 20th by a mere seven votes.

It would be difficult to say with whom the majority of New York bus and subway riders sided, the transit workers or the management of the Metropolitan Transportation Authority. It is a safe bet to say that during the inconvenience of the strike itself, most commuters had little polite to say about either of them.

Since people tend to sympathize with those who seem similar, it is worth looking at the ways in which transit workers resemble, and differ from, transit riders.

New York City is one of the few places in the United States in which only a minority of people rely on the automobile to get to work. Nationwide, 86 percent of people who live in or near central cities commute by car. In New York City, that number is about 33 percent. 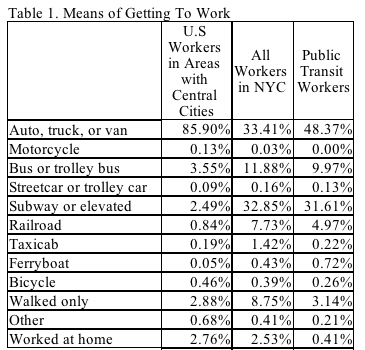 It is interesting to note that public transit workers in New York actually commute by automobile at a higher rate than New Yorkers as a whole.

There are also sharp demographic differences among commuters, depending on the means by which they get to work. For instance, those who use commuter rail to come to NYC generally earn more income, live in more affluent households, are more often male, are more likely white, are more often living with a spouse and have graduated from college than those using other means to get to work. They differ substantially from those who drive or ride an automobile, work at home or get to work by other means. 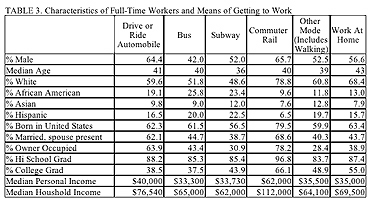 There are other differences as well. A larger fraction of transit workers are male and black than the public at large. They are also less likely to be educated, are as a group older than New Yorkers as a whole, and are more likely to own their own homes and live in married-couple households. Despite their relative lack of education, the arduous nature of transit work coupled with their unionized power has led them to a relatively high income. 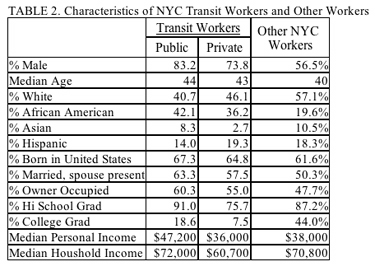 How this analysis was done.

This analysis made use of the Public Use Micro-sample data from the IPUMS website. Using a variety of variables it was possible to isolate those who work in the public or private transit industry, as well as those who work in New York City and travel to their jobs in various ways.

According to New York Observer, a bidding war has broken out among the major so-called Wall Street or White Shoe law firms. New associates are now being offered $145,000 up from $125,000, where it has been for about 5 years. My earlier column on New York Lawyers still seems to be basically accurate, though the figures have increased.

Is New York growing so fast that it is likely to reach 9 million population in the next two decades? Using recent projections from some private entities a New York Times story indicates that the Bloomberg administration is planning for it. New York City reached over seven million by 1940 and it took 60 years to reach eight million. Could it really reach nine million by 2025? So far, according to census numbers, New York City is growing more modestly than it did in the 1990s. The census recently changed their estimation methods, but the city usually challenges their estimates and is given credit for a few more thousand people. During that decade the census estimated that the city was only growing about 10,000 per year, but it actually was growing about 60,000. We will probably know more when the new fully implemented American Community Study data are released next August. Until then, the Census will issue a new estimate for the population through July 31, 2005 sometime this spring.

Despite the efforts of many in the redistricting and criminal justice communities the Census Bureau says that prisoners should still be counted at the prison sites and that the data should continue to be added to the counts in many small towns and counties. A rider was added to the census appropriation bill asking for a report on this issue. Not surprisingly the Census Bureau did not want to change a thing. The current method deprived the city of thousands of residents, who were moved upstate along with their power to affect the drawing of legislative lines for Congress, and State Senate and Assembly. But at least one New York State County does not use prisoners when they draw the county legislative lines, they think they distort the power in that county.