New York City certainly has a lot at stake in the current debate in Congress over the most significant change in immigration policy in decades. More than a third of all New Yorkers are foreign-born. In the year 2000, New York was home to some 2.8 million immigrants, which is more than nine percent of all immigrants in the United States.

But if neither the pro-immigrant demonstrations nor the anti-immigrant rhetoric has ratcheted up here the way it has elsewhere in the country, there are solid reasons for this. The situation is very different in New York City than it is in California and the Southwest. 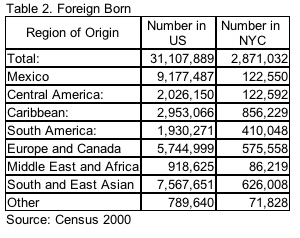 One difference is that the countries of origin in New York City are far more diverse than in other centers of immigration, as I wrote for this page in an article in 2002, "City of the Foreign Born." In Los Angeles, Mexicans account for almost 85 percent of the foreign born. No group in New York City is greater than 13 percent. So the protests in Los Angeles are largely that of one group. "The mobilization in New York City has been slower to develop," El Diario conceded recently. "The immigrant community here is incredibly diverse and, some say, harder to organize."

Two main groups of undocumented are those who entered the country without valid documents, including people crossing the Southwestern border clandestinely; and those who entered with valid visas but overstayed their visas' expiration or otherwise violated the terms of their admission. Most of New York City's undocumented belong to the latter category. 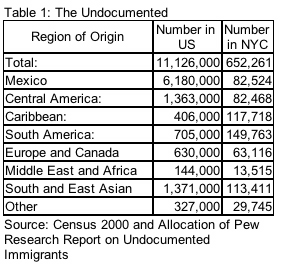 New York City has many Asian immigrants. But, while the numbers are surely growing, there are still relatively few Mexicans or Central Americans here, compared to the West Coast.

Given the demographics of New York City, and its long-time political traditions, it seems likely that most New Yorkers will remain well disposed towards the city's immigrants, legal or illegal.