Who are the Asians of New York City? They are foreign-born and native-born New Yorkers with a background in East Asia (China and Japan, for example), Southeast Asia (Vietnam, Thailand, Cambodia), and South Asia (India, Pakistan and Bangladesh), according to the official U.S. government classification of the Asian race. (Those from Central Asia -- Afghanistan, Iraq, Turkey, etc. -- are not included.) Members of these diverse populations now constitute about 11 percent of the city's population.

But can one really consider as one race people coming from several continents and speaking many different languages? 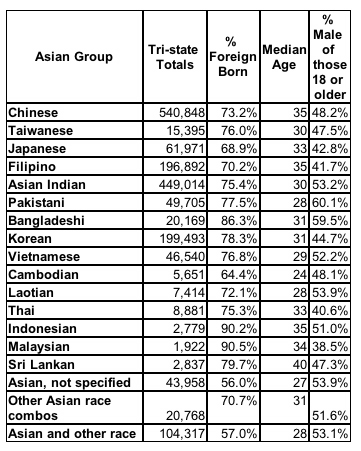 It should not be surprising that Asian groups vary greatly from one another.

Taken as a whole, though, there are some generalizations that can be made based on recent census data. The vast bulk of Asians in the metro area live in or near New York City, as the accompanying map shows. In fact, over half of all Asians in the tri-state area live in the city. 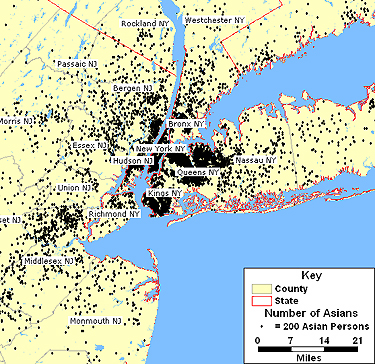 Asian households also have higher median household income than any other of the main racial groups except for whites. 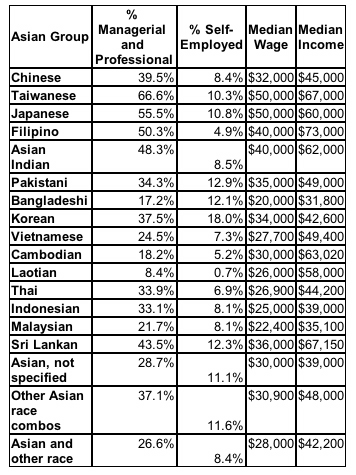 But there are sharp differences as well. The command of the English language varies greatly by group. Only about 38 percent of Bangladeshi speak English well, while over 80 percent of Filipinos do. The proportion of those over 25 years of age who have a BA degree also varies greatly, from a low of 9.1 percent for the Laotians, to a high of 74.4 percent for the Taiwanese. The proportion holding a professional and managerial job varied from 8.4 percent for Laotian and 17.2 percent for Bangladeshi to over 66 percent for the Taiwanese. The percent self-employed also varied greatly, with Koreans in the lead with 18 percent. In terms of wages the Taiwanese and Japanese had median wages of $50,000, while the Bangladeshi had only $20,000. Other groups were also quite low including: Thai, Vietnamese, Maylaysian and Indonesian. Household income also varied greatly among the Asian groups. Figures for the Filipino was $73,000, while Japanese, Asian Indian, Cambodian, Taiwanese and Sri Lankan were all at least $60,000. However, Bangladeshi, Maylaysian, Indonesian and Asian not-specified all report median household incomes less than $40,000. 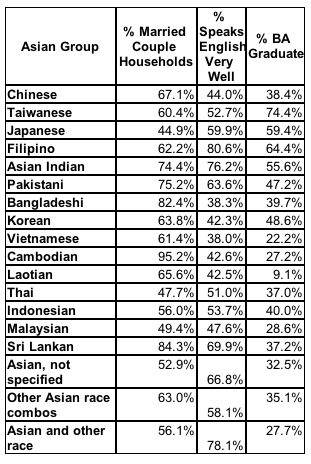 Growth of the Asian groups in the New York area has been dramatic for the last several decades. Though growth since the 2000 Census is not reported for the various Asian groups in a reliable way, the pattern of growth shown in the accompanying figures likely has continued.

The charts show a dramatic increase in Chinese (which includes mainland, Taiwanese and other Chinese), and in Asian Indian, which includes Pakistani, Bangladeshi and Indians, as well as in the Filipino population. The growth of Korean and other groups though marked is not as strong. 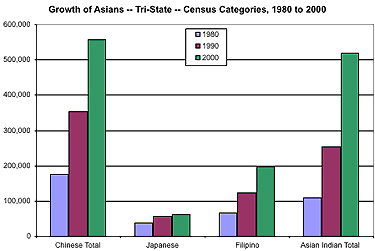 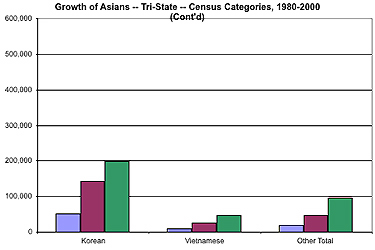