New York City’s population will reach 9 million around 2025, according to a spate of demographic projections featured in various news stories. But will the city really hit the 9 million mark in the next 20 to 25 years, as Con Edison, researchers for the Metropolitan Transportation Council, and Deputy Mayor Daniel Doctoroff predict?

The answer is a resounding yes, if one accepts the underlying assumptions of such projections. But since, like all projections, these estimates seek to predict the future, we will not be able to judge their accuracy for many years to come.

To get a sense of their accuracy though, we can compare projections with recent estimates and with patterns of historical growth. Urbanomics has produced one of several such studies projecting 9 million New Yorkers. To arrive at that number, it expects a growth rate in New York City higher than the rate between 1940 and 2000 and well in excess of what has occurred since 2000, as estimated by the U.S. Census Bureau.

The census estimates of New York City's population in the 1990s vastly underestimated the city's growth. (See Gotham Gazette.) Since 2000, however the bureau changed its procedures. It is instituting a new American Community Survey to provide a yearly census update. Along with records of births, deaths, and internal migration from the Internal Revenue Service data, that survey tracks the foreign born population. The first full release of the survey is due at the end of August and could change the picture of the city’s current and projected growth.

But the figures now available indicate that, since 2000, the estimated growth rate varied from a high of 0.718 percent between 2000 and 2001 to a small loss in population between 2004 and 2005. On average, the estimated growth rate since 2000 has been 0.353 percent. (These figures are summarized in Table 1.) Now many theorize that the growth rate has surely slowed, a consequence, they believe, of a slight ebbing in immigration, the end of the stock market boom, and the shock of 9/11. 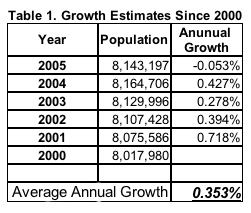 But despite all that Urbanomics projects a much higher growth rate of 0.564 percent for the 30 years through 2030. Since the city’s population increase for the first five years of that period has already failed to reach that level, New York City’s growth must rise in the next few years if Urbanomics and its colleagues are to turn out to be correct.

A Century of Population Growth

New York has been the largest city in the country since 1790. (Since the consolidation of the city in 1897, the city population includes all five boroughs.) Table 2 shows the census population for each decade from 1900 through 2000, the percent change from the previous census, and the annual growth rate (compounded). 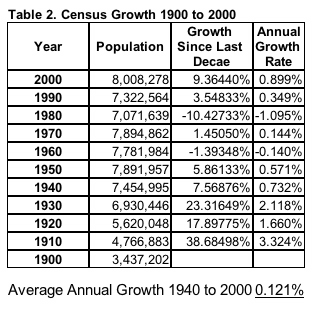 But to evaluate the new projections, the decades from 1940 through 2000 are especially relevant, since by 1940 much of New York City's transportation infrastructure was completed, the vast bulk of its road network already existed, and many buildings still in use had been erected. In short, New York City looked much like it does today in many ways.

As the data make plain, New York City was very near the 8 million mark twice -- 1950 and 1970 -- but in both instances the city then lost people. Indeed the population was officially at little more than 7.3 million in 1990. Economic downturn, white flight and the slowing of immigration until the 1980s led to New York City's slow growth until the last decade of the 20th century.

Then, quite unexpectedly, the population reached 8 million in 2000, spurred largely by the city's economic rebound and the robust increase in immigration.

Some of the apparent growth from 1990 to 2000 was simply the result of better counting in 2000. The difficulties and uncertainties in counting New York City's population led to a substantial undercount in 1990.

Despite all this, though, during the whole period from 1940 through 2000 the average growth rate (compounded) was 1.21 percent, less than one-quarter of the optimistic rate projected by Urbanomics and similar prognosticators for the next 30 years.

The latest high growth projections imply a population growth rate that vastly outstrips the historic growth patterns in New York City from 1940, as well as the recent brisk growth estimated since 2000. Small differences in a rate of growth for one year, when compounded, result in very large differences in projections.

If New York City grew during the 30 years after 2000 at the rate it averaged from 1940 to 2000, including that period’s booms as well as its two population declines, the population by 2030 would be about 8.3 million. If the average growth for the 30 years starting in 2000 matches the recent census estimates, New York City will almost reach 8.9 million by 2030. But the Urbanomics estimate expects an average growth rate of 0.564 percent through 2030 resulting in almost 9.5 million New Yorkers.

So, in predicting the future, it depends on how one views the past and the present. Historical population trends would seem to imply very little growth in population between now and 2030. A continuation of recent trends would imply somewhat more growth. And relying on a series of economic assumptions could put New York City's population at about 9.5 million by then.

Framed this way, it seems it could well take considerably more time than Urbanomics and others predict for New York City's 8 million to become 9 million. But only the future will tell for sure.