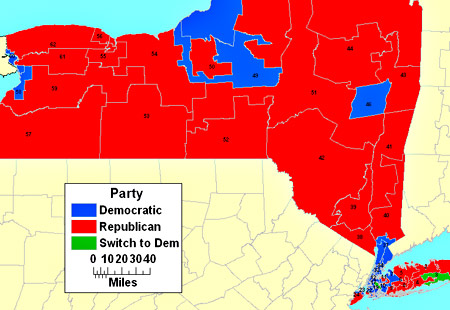 Image courtesy of Andrew Beveridge
Map 1: The shift in the State Senate also means a shift of power to New York City and some of its suburbs.Click here, or on the image above, to view a larger version of the map.

For New York State, the 2008 "change" election represents the final consolidation of power of a new demographic majority, as control in the State Senate shifts from upstate Republicans to downstate New York City-centric Democrats. The massive efforts to gerrymander the State Senate after the 2000 Census, including the arbitrary addition of a downstate seat to leave upstate and Long Island intact and maintain Republican control, only lasted for three elections: 2002, 2004 and 2006.

New York’s system of drawing congressional, State Senate and State Assembly districts gives a huge amount of clout to whichever party is in power and to the legislature. For more on New York’s redistricting process:

Redistricting Reform: Critics have long ridiculed New York’s system of carving the state into districts, but they disagree about what should replace it.

Redistricting and Non-Competitive Election: A debate on the effects of gerrymandering.

Why Gerrymandering Must Go: How one plan would change the system.

Of course three dissident Democratic senators from New York City could vote to keep a Republican as Senate leader, but given the great differences in the Democratic and Republican constituencies, this would make it difficult for them to address issues important to their New York City constituents. So, with the power all but certain to be in Democratic hands, one can expect that, barring a reversal in 2010, the Senate redistricting that will follow the 2010 Census will entrench the party's control for many, many years.

Certainly, that is what the Republicans did. They held the majority in the Senate for 70 years (since 1939), except for a brief hiatus from 1965 to 1967 in the wake of Lyndon Johnson's landslide victory over Barry Goldwater in the 1964 presidential election.

If the margins in the Assembly, where Democrats held 102 out of 150 seats before the election, are any guide, the Republicans should not expect to achieve a majority anytime soon after the 2010 Census is used to redistrict for the 2012 election. Even in a jurisdiction where one party holds a wildly lopsided majority -- as the Democrats do in New York City -- parties can still draw district lines to maximize the number of seats they hold. The disparity between Republican Senate and Assembly seats in the five boroughs makes this clear. Until the 2008 election, Assembly Democrats had arranged things to keep the Republican to only two Assembly members in the city. On the Senate side, though, Republicans managed to draw the lines so the party got four districts.

One would expect that after redistricting no more than one Republican Senator would remain. Indeed, this year while two of the senators, Andrew Lanza and Martin Golden, had easy victories this month, longtime Republican Sen. Serphin Maltese lost his bid for re-election. The fourth Republican, Frank Padavan, holds such a narrow lead over his Democratic challenger that the votes still are being recounted.

The GOP losses would probably extend beyond the city. The number of upstate senators would likely decrease by one or two due to changes in the allocation of seats upstate versus downstate. The senators representing those new downstate districts would in all likelihood be Democrats. This would lead to massive redrawing of lines upstate, downstate and on Long Island, which would be done to the benefit of the Democrats. Given all this, it is possible that after redistricting, the New York State Senate would have 38 Democrats and only 24 Republicans.

When one examines the underlying geography and demography of the new power base in the Senate, the change becomes even starker. This power shift will have major consequences for a variety of issues.

The first map shows the location of the Republican and Democratic districts and the two seats that switched to Democrat hands for the state as a whole, while the second map examines New York City and its environs. As is obvious from the first map, the change from Democratic to Republican control constitutes a massive shift of power from upstate and Long Island to New York City and Westchester. 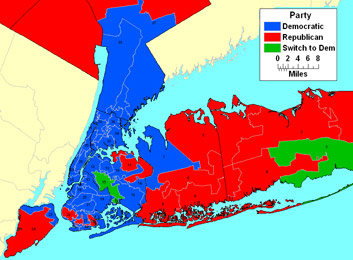 Map 2: Many of the districts that have gone from the Repulicans to the Democrats are in New York City or on Long Island. Click for larger image.

The underlying demography makes it plain that the GOP senators and the Democratic senators represent very different constituencies. Twenty-three of the 32 Democratic Senators are from the city. Another two seats overlap the city and Westchester, and two more are in Westchester, while Long Island now has two Democratic seats. There are only five Democratic seats upstate: two in and near Buffalo, one in Albany County, one near but not including Syracuse and one quite far north, including St. Lawrence County.

As to the Republican seats, three are in the city, including one on Staten Island, one in Brooklyn and (for now at least) one in Queens. The GOP has seven of the nine seats on Long Island but 20 seats -- a full two thirds (20 of 30) of all Republican districts -- are upstate.

Such demographic characteristics translate directly into interests in New York State policy. People in Democratic districts would be much more concerned with matters concerning rental housing, such as rent stabilization -- explaining why so many tenant advocates have seen a Democratic Senate as key to the success of their cause -- while those in GOP districts would be more attentive to various methods to reduce real-estate taxes. Since funding of schools is the number one use of state funds, the new Democratic majority may send more money for education to the city and downstate, or the cuts, when they come, would more likely affect upstate.

The efforts to build prisons upstate and to put many SUNY branches upstate may also be under pressure from the new majority. Policies that lead to filling upstate prisons may not be seen in such a positive light.

In short, every policy that has in the past benefitted upstate residents at the expense of those in the city and nearby could be mitigated or even reversed. The power of the GOP to hold legislation hostage to the majority in the Senate will be gone. Now all of the “Three Men in a Room,” will be Democrats, probably from New York City, and the power of the Democrats in both houses of the legislature could well increase, as soon as they resolve their struggle over the leadership of the Senate. Their constituents, it seems, should expect gains from their newfound power.