The recent baby boom in New York City led to an increasing squeeze in the search for the best school for the budding kindergartner or first grader. Unlike other recent spurts in enrollment, the latest surge has had the great effect in Manhattan, especially among highly affluent non-Hispanic white families 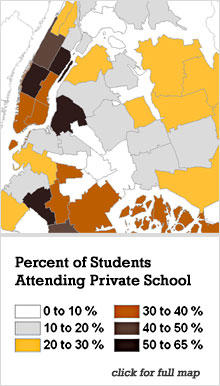 The number of white toddlers (ages 0 to 4) in the city has increased greatly. In decades past, white families and more affluent families would often leave New York City for the suburbs, where the schools were small and elite (at least according to who lived there) and open to all residents. Now more of these families prefer to stay in New York City.

The impacts of the new trend are reverberating throughout New York City's elementary schools -- public and private, elite and neighborhood. One of the city's top elementary schools, Hunter, saw 1,550 children apply for 48 slots. The large increase in students sitting for the private school exams document that this is indeed the year of the crunch.

Many affluent parents have seen public school Gifted and Talented programs as a viable - and free -- alternative to private schools, but critics have long maintained the system unfairly favored these children, shortchanging those in poorer black and Hispanic areas. This year the city adopted a standardized test with uniform standards to select those eligible. However, we now know that this method resulted in a much less diverse program according to the New York Times.

Finally, just getting ones child into a neighborhood school seems to have turned into a difficult process for some. Confusion, competition for limited slots and changes in the selection methods for the relatively few desirable elementary programs seem to be the order of the day.

Which kids go to public schools and which attend private schools in New York City? Which get into the sought after programs, such as Hunter or the Gifted and Talented programs? What do we know about the location, race, ethnicity and economic standings of the families of New York City's elementary school parents, public and private, gifted and not so gifted?

To answer some of these questions I pieced together data from the Census and the Department of Education, and created some simple maps. Beyond this, using some estimates based upon reasonable guesses of the test outcomes, I was able to get some idea of the composition of the Gifted and Talented programs. Simply put, the kids who find their way into the preferred programs, whether public or private are much different than the average New York City elementary kid. They are much more likely to be from intact, higher income families and to be non-Hispanic white.

Now that Gossip Girl is on TV, and Horace Mann's violations of academic and due process have been exposed by New York Magazine, outsiders may sense that private school kids are different from public school kids, at least in high school. Of course, most private schools are not at the rarefied financial and academic levels of Collegiate, Brearley, Spence, Horace Mann, Ethical Culture and the like. Indeed, the vast bulk of private schools in New York City are run by the two Catholic archdioceses, while there are yeshivas, along with a few Lutheran, Muslim and other religious schools.

In 2006 about 22 percent of 518,000 elementary students (kindergarten through grade 4) attended private school according to the census's American Community Survey. Table 1 compares the elementary private school kids with those attending public school.

Map 1 presents the percent of elementary children by sub-borough (which follow the boundaries of community planning districts, except that two in lower Manhattan and two in the Bronx are combined.) As that map makes plain, in the Upper East Side of Manhattan (the home Gossip Girl) more than half of all elementary kids attend private school. This percentage is quite high in other parts of Manhattan, as well, including the Upper West Side and midtown and downtown. It is in exactly in these areas that the baby boom for non-Hispanic whites has occurred in the last few years.

In Brooklyn, the percent of children attending private school is especially high in Williamsburgh and Greenpoint, as well as in Borough Park. Here, of course, there is a high concentration of observant Jewish parents, Also in Brooklyn, the area including Sheepshead Bay has relatively high private school enrollment. Private schools, even the religious ones, cater to the parents with some means and enrollment is concentrated in those areas.

The rejiggered selection criteria for slots in New York City's Gifted and Talented program, requires taking a test, usually in kindergarten, and scoring in the 90th percentile. Students who clear this hurdle are likely be from non-Hispanic white families and from affluent families. Many of their parents can afford pre-school, lessons, nannies and the like. When their children take a test, even at age four or five, they are prepared and have a huge advantage over other students. 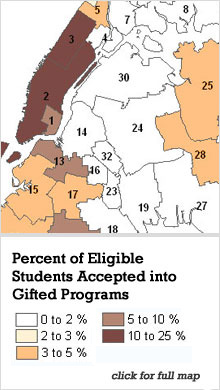 The Department of Education has not released full data about the racial and Hispanic composition, as well as the eligibility status for "free or reduced lunch program," of the admitted students. What we do know is that the number of students qualifying for gifted and talented slots radically changed for many districts between last year and this year. This year District 2 in a large swath of Manhattan had 15.2 percent of its students qualifying, while District 3, on the Upper West Side, qualified 22.3 percent. Most districts were well below 5 percent. Map 2 gives the overall rate of gifted and talented students qualified compared to the total in the cohort. These figures include all students who would be eligible for the first time for Gifted and Talented programs this year, whether or not they applied.

The percent of non-Hispanic whites and the percent not qualifying for free and reduced lunch is highly correlated with percent qualifying for Gifted and Talented programs. Using data from the Early Childhood Longitudinal Study of Kindergarten, I found that non-Hispanic whites are much more likely than non-Hispanic blacks or Hispanics to score in the 90th percentile or above on a cognitive test. Their performance does vary by which test -- math, language or general knowledge -- is being used.

Performance on tests taken at kindergarten is highly influenced by the student's family environment of the student. This means the actual difference between white students and other may be even greater in New York City, where there are very high differences in income and education between non-Hispanic blacks and non-Hispanic whites, especially in Manhattan.

The results of the estimates are shown in Table 2.

Non-Hispanic whites and Asians almost triple their percentage, while the percent non-Hispanic black and Hispanic plunges. In short, students accepted in the Gifted and Talented program are not all representative of the students in New York City, and less so this year than last year.

As the baby boom in Manhattan shows little sign of ebbing, we can expect the middle class kindergarten crunch to continue. Parents here can chose between many types of private and religious schools, selective schools, their neighborhood elementary school or gifted and talented program. But the suburbs are just a short train ride away, and many have lots of slots for new elementary school students available to anyone who can afford to live there.