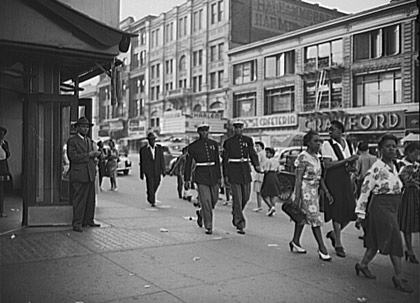 Lenox Terrace, where U.S. Rep Charles Rangel had four apartments, now qualifies as a luxury building. Townhouses in Harlem sell for one, two and even more million dollars, as real estate developers build new condos in Hamilton Heights and elsewhere, Meanwhile Columbia University arranges to get much of West Harlem declared blighted so its expansion in Harlem, past the Fairway grocery store and Dinosaur Barbecue, can march on.

With the recent city rezoning of the area (see related story), many residents fear they will be pushed aside by new development. What is happening to Harlem? Is it becoming white? Is it becoming a neighborhood for the rich?

Harlem has gone through many changes since 1910. How far the latest transformation will go, though, remains to be seen.

As with many New York neighborhoods, defining Harlem's boundaries can be difficult. Central Harlem follows the definition set out by Gilbert Osofsky in his 1966 book Harlem: The Making of a Ghetto. The southern edge starts at 96th Street on the East Side; at Fifth Avenue and Central Park it goes up to 110th, and then cuts over to 106th Street on the West Side. The northern boundary of the area in most places is 155th Street, though it extends a bit further up on the East Side. Central Harlem is basically north of Central Park and east of Morningside and St. Nicholas avenues.

Prior to 1910, most of Harlem's settlers were middle class, including many notable African Americans. In the 1920s, an efflorescence of culture known as the Harlem Renaissance occurred, and the Apollo Theatre and the Savoy Ball Room were founded. As the "great migration" of blacks from the American South continued, and the size of the black population expanded, an area of concentrated poverty developed. Kenneth Clark's 1996 book, Dark Ghetto, certainly was influenced by Harlem. 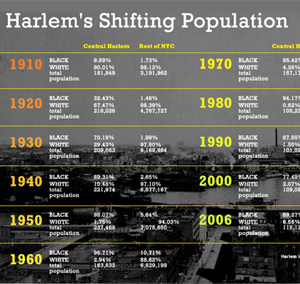 Click on the image for full graph or view a text version here.

Central Harlem lost more than half of its population between 1950 and 1980, and Greater Harlem also saw its population drop as well. This was a period of sharp economic decline in New York City, especially for the black community. This also marked the era of urban renewal, and many older housing units were razed either for public housing projects or for other apartment developments. The new developments did not come close to housing the same number of people. Almost all of the people who remained in Central Harlem, though, were black.

Since1980, Central Harlem has become less black, and by 2006 a smaller percentage of the population was black than in 1930. Meanwhile, the white and Hispanic populations rose. In 1980, there were 672 whites in Central Harlem, constituting about 0.6 percent of the population. By 2006 that figure had increased to 7,741 or about 6.6 percent. Hispanics accounted for 4.3 percent of Harlem residents in 1980, the first year they were classified separately. In 2006,that number reached 18.6 percent.

In short, there had been a turnaround of sorts in Harlem. The white population that had moved to Harlem by 2000 was distributed in many different areas. Between 1980 and 2000, there has been a decline in the concentration of blacks in Harlem. Furthermore, according to the 2006 American Community Survey, the overall decline in black population has continued.

In the early days of Harlem, the black community there was quite diverse, especially when African Americans in Harlem were compared to those who lived elsewhere. During the period of the rapid influx into the area, the level of concentrated poverty increased in Harlem. That accelerated during the 1950s through the 1970s with urban renewal, housing deterioration and a decline in population. At the same time, areas such as Southeast Queens attracted affluent black families.

Harlem has changed from an impoverished area with a few middle-class families to one where some middle-class people, including a few whites, have moved in and made their homes. In some parts of Harlem, blacks have been joined by Hispanics, but that percentage has not grown much since 2000. Rather, the new residents of Harlem seem to be non-Hispanic white and non-Hispanic, who consider themselves to be "other race," neither black nor white. The traditional townhouse areas around Strivers Row, Sugar Hill and Marcus Garvey Park have undergone a rebirth. Stores and restaurants catering to the affluent have opened in West Harlem, while Magic Johnson opened a Starbucks and a Multiplex on 125th Street, near where former President Bill Clinton has his office suite. Columbia University's expansion will bring more change to West Harlem.

What these changes portend for New York City's iconic black neighborhood is hard to fathom. On the one hand, new residents mean that Harlem will have more diversity of income, occupation, educational level and race than it did in the 1970s and 1980s. At the same time, the large stock of public housing and the relatively low income means that high levels of poverty will continue to be a feature of Harlem. Harlem will not lose its black majority or its high concentrations of poverty anytime soon.