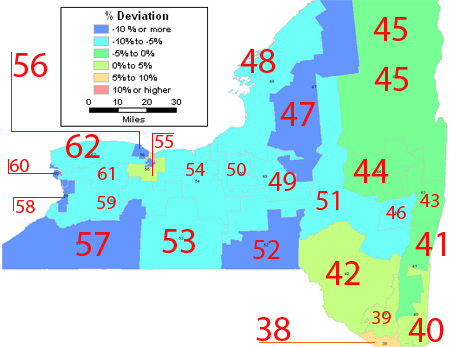 Numbers denote State Senate district, To find out who represents the district, see the table below.

Your census form will arrive in the mail around March 14 unless, of course, you live in a New York state or a federal prison, where it will be distributed by the warden and collected in a sealed envelope and sent to the Census Bureau in Washington. How that return is counted -- and indeed if it is counted at all -- will have a major impact on power and politics in New York state over the next decade.

Since the 2000 census, the Census Bureau has estimated massive population shifts that should be confirmed by the results of the 2010 census. The bottom line is all legislative bodies across the country will face massive redistricting challenges.

In New York, the State Senate will likely move further into Democratic hands, particularly if the Democrats maintain control after the 2010 election. But whoever ends up in charge of redistricting will find it virtually impossible to ignore the fact that the population and power shift from upstate to downstate continues unabated.

Revised congressional, Senate and Assembly districts must be drawn to accommodate this and other population shifts. They also must take into account the commands of the Voting Rights Act to district in a way that allows of minority voters to exercise influence in the election of representatives. (Redistricting in New York is done by both houses of the legislature as a bill that then must be signed by the governor to take effect. If the legislative process fails, courts can intervene after a suit is filed.)

The census will provide the raw material for redistricting. The main clients for the Census Bureau are Congress, the state legislatures and the governors in the United States. A variety of factors will affect the outcome of the census, as well how it is used to divide the state. 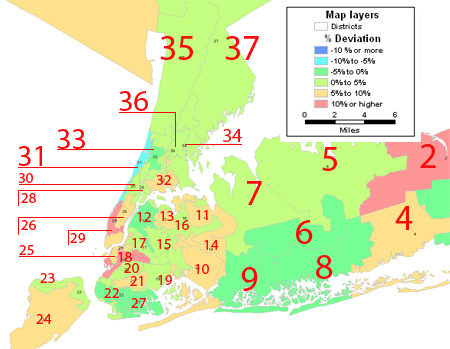 Efforts are underway to count the so-called "hard to count" parts of New York City. Mostly the poor and immigrants reside in such neighborhoods. During the Census 2000, some upscale African American neighborhoods did not participate very well, at least initially. On the other hand, some immigrant areas did better than expected. Apparently, some data may have been falsified by workers struggling to meet what they saw as unrealistic deadlines.

Since substantial efforts are underway in New York City to count the "hard to count," one should expect that the 2010 census will do about as well as did the 2000 census.

What, then, to expect in terms of the Congress, the Senate and the Assembly for 2012?

The State Assembly is so overwhelmingly Democratic that the chance for major political change based upon population changes seems remote. Nonetheless, many members will find that they will represent significantly changed districts.

As for Congress, an analysis that I did for Real Elections Project shows that New York State is likely to lose at least one congressional seat, and that Louise Slaughter's Rochester area district is very under-populated. Nevertheless, the loss of one seat will require the redrawing of every congressional district so many areas will face major changes.

The real battle, however, will be in the New York State Senate. Last time around, with the Republicans facing the loss of seats in their upstate base, the GOP crafted a plan that it sprung on Democratic legislators and public at the last moment -- after numerous mandated public hearings were over. To avoid having to cut a Republican seat, the plan added a new seat to the Senate and carefully distributed the rest of the population shift to dilute New York City’s power. (By creating an even number of Senate seats, the plan bears some responsibility for the deadlock that paralyzed the Senate last summer.)

If the GOP should regain control of the Senate in time for redistricting, they may try a similar scheme. But such efforts would run into a difficult demographic reality. This decade, as in the last, population generally grew in the city and its environs and declined upstate. The accompanying maps and table, based upon population figures from the 2008 American Community Survey and estimated through 2010, show that almost all of the upstate districts have lost people, while most of the downstate districts, including New York City, the northern suburbs and Long Island gained population.

This means that to if districts are to be of relatively equal size, seats and voting power should shift away from upstate. Redistricting experts measure the departure from the ideal (total population equality) in terms of how much a specific district deviates in size from the average district. Since districts should be as equal as possible, measuring the degree of inequality is expressed as "deviation." Any plan with a total deviation (the difference between the largest positive and negative deviation) greater than 10 percent is legally suspect. Thus, deviations greater than 5 percent positive and negative are cause of serious concern.

Using this yardstick, 17 upstate districts have populations that are more than 5 percent below the ideal size, while 14 downstate and Long Island districts have deviations higher than plus 5 percent. This result is not at all surprising, since during the last redistricting round, the GOP majority did everything possible to pack population downstate and spread it out upstate. The party's stratagems prevented http://www.gothamgazette.com/article/demographics/20020701/5/591 a massive redistricting upstate in 2002, but may not be able to avoid it in 2012.

Further exacerbating the population trend is the recent announcement that the Census Bureau will make data available so that the prisoners (and other so-called group quarters residents) might be excluded from the totals for state and local redistricting. The bureau will identify where such facilities are and how many people occupy them.

New York counts prisoners as being residents of the place where they are incarcerated -- not the community they came from. Given that most prisons are upstate and many prisoners are from the five boroughs, this inflates the upstate population. Any change in that would have the effect of decreasing the number of people counted for redistricting upstate even further.

Many advocates and a recent court decision, as well as a National Academy of Sciences report, support the idea that prisoners are really not residents of prisons, since they generally do not plan to remain in the surrounding community after they are released. Instead, they should be counted where they were living before they were incarcerated. The census data would only allow states to not count prisoners in prison. It would not solve the problem of where they should be counted. (The impact of just excluding prisoners is estimated in the attached Table, as well.)

State Sen. Eric Schneiderman has introduced legislation that would force the state to count prisoners as residents of their prior homes, using Department of Corrections Data. The bill's fate is uncertain.

In short, New York State faces massive redistricting once the 2010 census is released in the first quarter of 2011. As those downstate work to get their "hard to count" population enumerated, upstate residents and voters can feel even more of their power slipping away. If the State Senate joins the Assembly in being solidly in Democratic hands with stronger downstate representation, it is inevitable that government appropriations will follow this power shift. So, as you complete your census form, remember that the data generated have a tremendous impact on the distribution of, power and money.