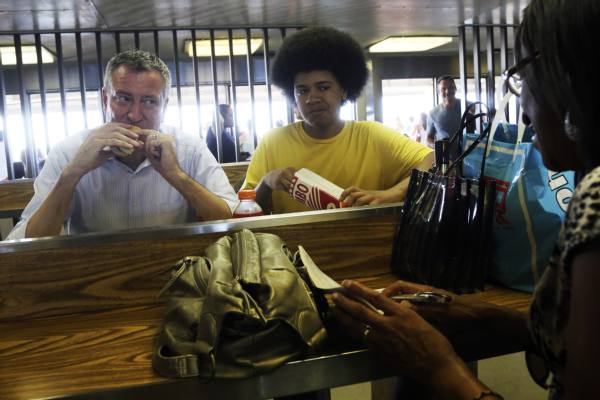 As New York took in the extent of the win by Bill de Blasio in the Democratic primary for mayor, the impact of a powerful television ad starring his son Dante seemed plain.

The ad hit on de Blasio’s main campaign points of taxing the wealthy, ending a “stop-and-frisk era that unfairly targets people of color” and universal pre-K. But it was the messenger that made it a show-stopper: A mixed-race kid with an exuberant Afro speaking to the camera about how his dad was “the only Democrat with the guts to really break with the Bloomberg years.”

De Blasio’s wife is a black woman, and both Dante and Chiara (his daughter) are mixed race. With his family and the ad featuring his son playing key roles in his campaign, de Blasio split the black vote almost evenly with former comptroller Bill Thompson., the only black candidate for mayor

Remember, in the primary between Hillary Clinton and Obama, who is mixed race, in 2008 Hillary Clinton did better among white and Hispanic voters than she did overall, and Barack Obama won the black vote by a very wide margin in an overall close race. In terms of who voted for whom, race mattered.

As Joe Lenski, the man behind the exit polls, said in the Daily News, "I don't know if I could ever remember a race where a black guy is (close to) losing the black vote, the woman is losing the woman vote, the Jewish guy is losing the Jewish vote. It's quite impressive .... De Blasio did a good job of saying, 'I'm one of you even though I'm not personally one of you.' He was able to say, 'my wife is African-American, my kids are multiracial."

How unique is Dante de Blasio, the 16-year-old superstar of the 2013 elections, who communicated this important message? Just how many New Yorkers are non-Hispanic males who would identify themselves as black and white? An analysis of 2010 Census data shows that very few young New Yorkers are black and white, and even fewer are non-Hispanic black and white. Furthermore, there are much lower proportions of such individuals in New York City in the country at large. These data are presented in the accompanying table, and some are summarized in the two charts below. 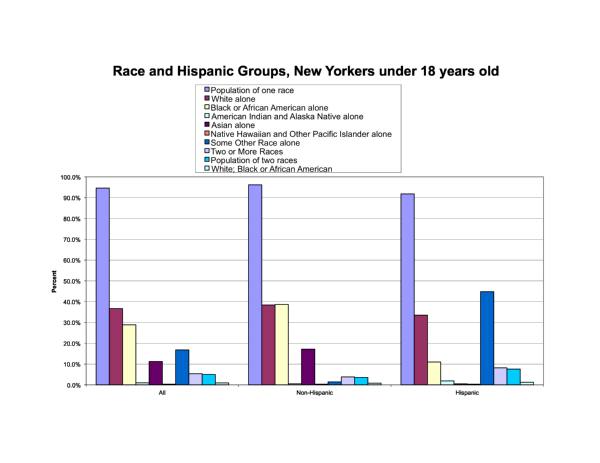 For those under 18, there are 94,731 who report being of two or more races; 88,321 of these are of two races, and 16,735 are black and white. When one looks at those reporting that they are non-Hispanic black and white, there are only 8,980. Dante, it is plain, is in a very small group. However, these number also are self-reports; as has become obvious during the last few years, the genetic make-up of individuals does not necessarily mirror their self-reports.

The two charts also make it plain that the city has a lower proportion of multi-racial young people than does the United States in general; this is particularly true with respect to those reporting black and white. In the US as a whole, some 1.67 percent of youth are reported to be black and white, while in New York City the figure is 0.94 percent. (Other comparisons are in the accompanying table.) 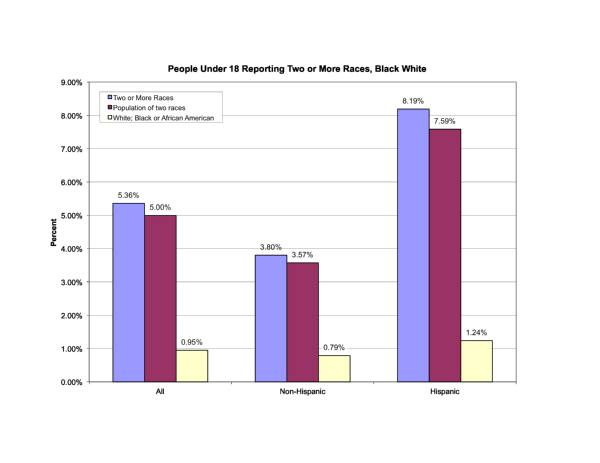 But it’s clear that while Dante de Blasio may belong to a small group, the message he delivered was tailored for a much broader audience. It came in the midst of a contentious federal trial over whether the policy was unconstitutionally targeting black and Latinos.

Despite constant refrains by Bloomberg, Police Commissioner Raymond Kelly and some of the media to the contrary, the judge in the stop-and-frisk case, Shira Schiendlin, based her assessment of the practice on expert and factual testimony. Specifically, she drew her opinion on evidence that the police stops young blacks and Latinos disproportionately not only in terms of race and Hispanic status, but also in the neighborhoods that they tend to live in, and in terms of the crime rate in those neighborhoods.

Criminologist Jeffrey Fagan, the plaintiff’s expert in the case, in an article in the Columbia Law Review, has demonstrated that teenagers like Dante — who are perceived as black even though they may be mixed-race — have an 80 percent chance of being stopped. According to father de Blasio, he has discussed this with Dante at length to try to lessen his chances of being stopped.

Plainly, Dante’s uniqueness and the de Blasio family’s uniqueness, along with de Blasio’s position, which plainly attempt to address directly the concerns of many blacks and Latinos in New York City, helps to explain de Blasio’s electoral success.

But while the messenger may have been unique, it was the message that more than likely swayed voters to cast their ballots for his dad. Dante’s uniqueness and the powerful ad just made it possible for the message to get through.