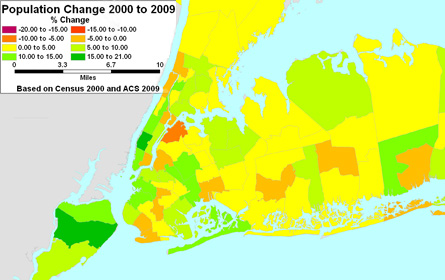 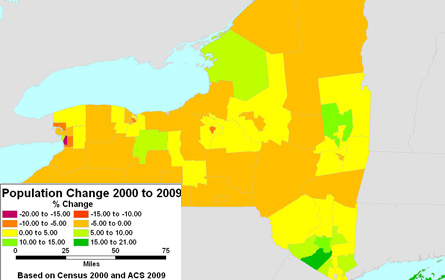 These maps show the estimated shifts in population between the 2000 Census and 2009. As has been true for decades, upstate regions continue to lose population.

New York state received a nasty surprise from the Census Bureau on Dec. 21. According to the first results from census 2010, the state has 163,351 fewer people than the bureau estimated it did on July 1, 2009. As a result, New York will lose two congressional seats, bringing its total down to 27, tying it with Florida.

The loss of two congressional seats will set off a huge redistricting fight. Beyond representation in Congress, the diminished New York state population will have a major impact on the amount of federal aid that the state receives. 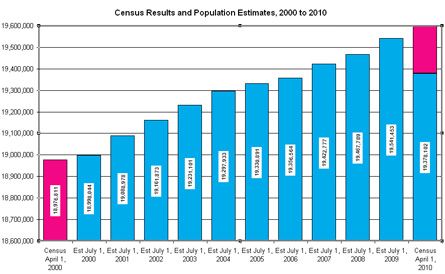 This chart compares the population count in the 2000 census and the year-to-year estimates with the final count in 2010. The purple indicates how much larger the 2010 count would have been if the estimated trends had continued. (Click on the chart to view a larger image.)

Demographers and politicos are scratching their heads trying to figure out how this happened and what the implications will be. Unlike California, which has already claimed an undercount and protests the census results , New York state is still contemplating the impact and sources of this apparent population loss.

An examination into which parts of the state were overestimated or undercounted is necessary. Once the redistricting data are released in March, we will have much better information.

In general, though, there are three possible explanations:

-- The procedure by which the census creates estimates is flawed.

-- The 2000 count may have been somewhat inflated, and the new count reflects a return to reality.

Each of these explanations could be true in various ways. The census estimates are based upon births and deaths and international and domestic migration. Immigration -- foreign or domestic -- is particularly hard to capture, and the number of immigrants to New York state may have declined. Foreign immigration would mostly affect the city and downstate, while domestic immigration is important upstate.

New York state has many "hard to count" areas, especially in the city. Though major efforts were made to count residents from these areas, it may be that the backlash from 9/11 and a perceived increase in anti-immigration sentiment led some immigrants to be less willing to participate in the census than they were in 2000. Similar problems may have affected upstate, if the census outreach was ineffective.

Finally, technical issues related to the addition of extra addresses arising from a census check of addresses in 2000 may have led to duplication. If so, it is possible that the city population was somewhat overcounted in 2000. Since the census numbers from 2000 become the base for the census estimates, if those extra addresses were removed or the Census Bureau eliminated more duplicate addresses, then the population in the city, especially in parts of Queens and Brooklyn would be less than was estimated.

Whatever the reason for the lower count in New York State, the implications for congressional redistricting are massive. Most of the population losses occurred in upstate New York, while the gains were in areas in and around the city, most particularly in outer ring suburbs.

The table below shows each district's population gain or loss, and some characteristics of the district, including the current incumbent, his or her party, the member's vote in the November elections and the degree to which the districts deviates from the ideal population size of 717,707 people.

As the table makes plain, Districts 1 through 19 will need to lose one seat, while districts 20 through 29 will lose the second seat. Though District 28, represented by Louise Slaughter, and District 27, represented by Brian Higgins, are the farthest below the new ideal of 717,707, it will require 10 districts becoming only 9 to make upstate districts conform to population equality. Similarly, even though most districts in the downstate area have been growing, the 19 downstate districts will need to become 18 to leave New York with the 27 seats to which it is entitled.

Thanks to the new census count, New York state is now in for two separate games of musical chairs to find out which representatives will no longer have seats to call their own.