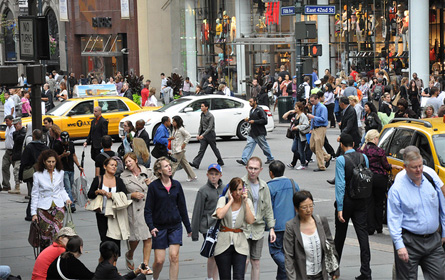 The 2010 census poured cold water on Mayor Michael Bloomberg's rosy view that New York City would hit 9 million long before 2030. The census found that, instead of growing to 8,421,789 residents as the census estimated just a few days before the official numbers were released, New York City had only 8,175,153 residents, some 246,636 less than expected.

The estimated brisk growth pace of 5.2 percent since 2000, suddenly became a phlegmatic 2.1 percent. Indeed, if present trends continue New York City will not make it to 9 million until sometime in the decade of 2050. In short, the growth rate, if correct, means that many of the enthusiastic proclamations about the city's unique growth and its attractiveness as a place to live are simply wrong.

Predictably, the mayor, who made his fortune purveying presumably accurate financial information, is not willing to believe that the census's careful enumeration of New York’s population could be correct. He is planning to challenge it, and other officials are supporting that challenge. However, instead of taking the issue to court, they plan to invoke the Census Bureau's own Count Resolution process. This is a technical procedure that generally corrects blatantly wrong counts. After 2000, for example, the Census Bureau placed a number of prisons and college dorms in the wrong cities, counties and towns. When these mistakes were brought to the Census Bureau’s attention, it corrected such obvious errors.

New York's argument for an adjustment is much more complex relying as it does upon the increase in vacancies and the undercounting of immigrants. Indeed, there are at least four reasons to have confidence in the census count.

1. Housing vacancies are on the rise in New York City and throughout the country:

Over the decade New York City did see an increase of about 170,000 housing units, but, according to the Census, the number of vacant units rose by some 82,000.

Bloomberg explanation: The census misclassified many occupied units as vacant. 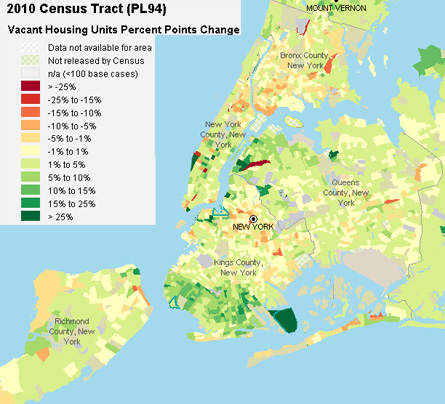 Home and apartment vacancy rates rose between 2000 and 2010 -- in New Yrk and throughout much of the country (For a larger version of this image, go here.

Possible other explanation: Many of the new units were built as part of the boom and remain vacant. As the accompanying map shows, the rise in vacant units occurred not in the immigrant areas in Brooklyn and Queens, but rather in other areas such as the far West Side and Bay Ridge Brooklyn. Most of the other cities in the United States experienced a large increase in the proportion of vacant units. Indeed New York City's increase of 2.15 percent means that it ranked 79th out of the 109 cities with more than 200,000 population in 2010. New York City, along with the rest of the United States, experienced a housing bubble and still working through the extra units that were constructed during that bubble. So the vacancies may be real, unless New York City experienced growth unlike any city in the country.

2. This census missed many immigrants.

The Bloomberg administration has said the census staff was unable to count many newcomers to the city, particularly those who came to the country illegally or live in illegally divided apartments.

Other explanation: Of course some immigrants were missed, but it is also true that immigration of all sorts slowed during the financial crisis. It may be that New York’s immigrant fueled growth may have tapered off.

Certainly the strong increase in immigrants seen in places like Queens and Brooklyn during the decade of the 1990s has slowed substantially, as the climate for immigrants has become much less friendly nationally and their job prospects have ebbed. Indeed, Jeffrey Passel and D'Vera Cohn at the Pew Center estimatedthat the number of illegal immigrants to the US declined by about one million between 2007 and 2009. New York City seems likely to have experienced some of this decrease.

3. The 2000 census may have overcounted New York City.

This is a seldom discussed point, but if the census, because of the very real difficulties of getting an accurate count in a city as diverse as new York, could have overcounted the number of people in the five borough in 2000 due to putting phantom residents into housing units that did not exist or by double counting some. (For more on this, see my earlier column.) If this happened and the excess was reversed in 2010, New York City's apparent growth would be less than its real growth.

Apparently the census also considered this possibility as I outline in another previous column: . If the city had been overcounted by say 200,000 in 2000, and was not overcounted this time, its real growth would actually be about 4.7 percent. Any overcount would serve as the base for the census estimates during the past decade, so if the city were overcounted by 200,000 in 2000 -- and so really had about about 7.8 million people -- then the estimated growth of roughly 420,000, would bring the census estimate almost exactly to the same number as were counted in 2010.

An undercount in the 1990 census, which New York and other big cities challenged in an unsuccessful lawsuit, means that the increase in the 1990s was overstated. Any undercount in 1990 combined with the possible overcount in 2000 would have inflated the percentage growth between 1990 and 2000. Because many demographic and econometric models use recent growth to estimate future growth, the projection for the first decade of the 21st century then could have vastly overestimated population growth.

All in all then, it is quite likely that the 2010 census count is basically accurate, but that the growth rate for the city is more than suggested by the change between 2000 and the 2010 census. New York, it seems, did participate in the slowing of immigration and overbuilding that were common in the 2000s.

When question about the city's growth, Bureau of the Census director Robert Groves said, "This is the time when many mayors receive counts that disappoint." Though Bloomberg and his administration indeed may be disappointed, the census surprise for New York City pales in comparison with that for Detroit. The wrong estimate there implied that Detroit had about 200,000 more people than it had -- meaning the numbers originally projected the Motor City as being 28 percent larger than it turned out to be.

Many cities in the United States, especially in the East, had population loss or very slow growth since 2000. Maybe it is disheartening that New York’s apparent growth in the 1990s did not continue into the 2000s, but after the 9/11 attacks and the financial crisis, maybe the city's continued though slower growth indicates not weakness but just how robust New York City is.