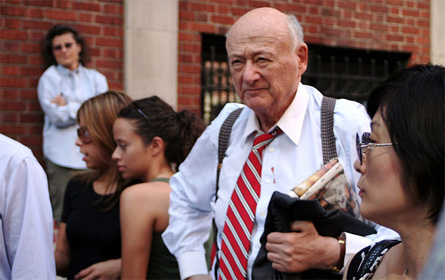 Photo by Boss Tweed
Former Mayor Ed Koch got a majority of state legislators to sign a pledge saying they supported redistricting reform but, so far, that has not translated into change

As the current state legislative session winds down, efforts to reform the redistricting process in New York state appear to be dead. Yet, at this very moment the new Citizens Redistricting Commission in California, which has final authority, has released a preliminary plan that in the process of cleaning up lines would radically alter the California congressional delegation.

It would add up to five Hispanic seats, increase the number of Democrats and throw a number of sitting U.S. representatives into the same district. Beyond that, the commission's proposal may end up creating the Democratic super majorities in both houses of the state legislature needed to raise the state's taxes and pull it out of its financial crisis.

Meanwhile in New York state, despite former Mayor Ed Koch's efforts to get many legislators to pledge to vote for reform, despite the fact that Gov. Andrew Cuomo claims to be making it a priority and despite universal support of the usual good government groups, no bill has been reported out or is expected to come to the floor before the session is over in a few days. This means that the same chaotic system that brought us an impasse in Congress and the deadlocked State Senate will remain in place for this round.

The California experience throws into high relief why reform of the legislature by the legislature repeatedly fails in New York state despite receiving lip service support for the last few years. Two reasons stand:

A constitutional amendment would make it possible to have the type of reform that happened in California. But for that to happen, the legislature would have to pas the measure in two sessions, and the voters would then have to ratify it.

The Democrats could have started the process by passing a constitutional amendment on redistricting reform last year when they controlled both houses of the legislature. They did not. If they had -- and if the amendment passed again this term -- it could have been on the ballot this November, in time for this round of redistricting.

The enactment of a legislative reform remains possible. This would mean that a commission would draw lines, but the legislature and the governor would have to approve the lines and so would have final say. Even this limited reform has not made it to the floor of either house.

When one looks at what is ahead for redistricting, it is obvious why this has happened. Republican senators do not want to lose their majority, and the Democrats in the Assembly do not want to risk their individual seats and lose a few members from the majority, despite their overwhelming advantage. This stalemate occurred even though the fiasco that was redistricting last time is about to be rerun, and everyone claims to support reform.

In the last redistricting, all plans initially considered for the State Senate involved 61 seats, the total number at that time. Then at the 11th hour, a new plan was proposed. It added one seat downstate bringing the total number of senate districts to 62.

In addition, the plan carefully allocated the population so that every district downstate was overpopulated and every district upstate was under populated. It also maintained the so-called Velella racial gerrymander, (the seat now held by Jeffrey Klein); and cracked and packed minorities in Long Island. "Cracking" involves splitting a large bloc of minority voters into several districts, so that they cannot chose their preferred candidate. "Packing" means putting a large block of minorities into one district so as to reduce their impact several districts.

This plan was challenged in federal court unsuccessfully. Because it allowed for an even number of senators, it led directly to the State Senate deadlock in 2009.

The Assembly plan in some ways was the mirror image of the Senate plan. Most districts upstate were over populated, many downstate were under populated. Incumbents were protected.

What Can We Expect This Time?

I have prepared data on the population and the citizens of voting age population by various groups for the present set of lines. Here is what New York State faces. For Congress: 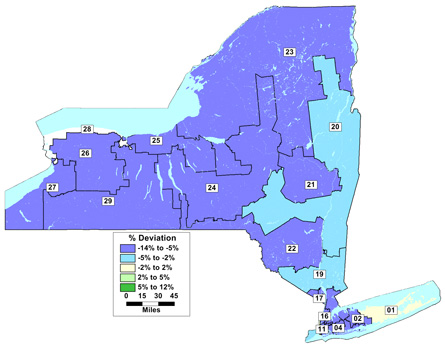 Currently all but one of the state's congressional districts -- District 1 in eastern Long Island -- is smaller than the ideal district. For a larger map showing how much each district deviates from the average -- or ideal -- size, go here.

For the State Senate:

For a table listing all 150 State Assembly districts and their demographic characteristics, as well as their size, go here. 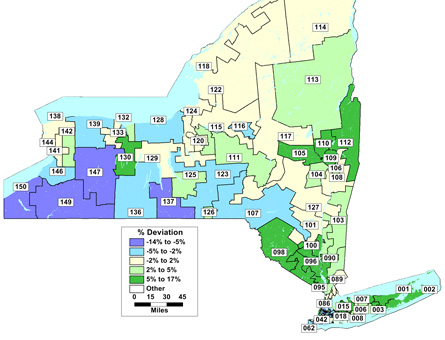 With 150 Assembly districts, those deviating sharply from ideal size are more scattered around the state than is the case with State Senate districts. For a map showing how much each State Assembly district deviates from the average -- or ideal -- size, go here. 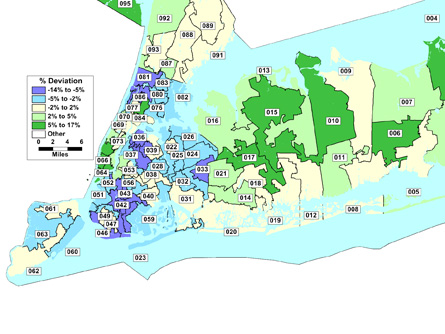 Heavily Democratic New York City has a large number of State Assembly districts that are substantially smaller than normal, giving their resident ore clout in the Assembly than people who live in more Republican Long Island. For a map showing how much each district in the metropolitan area deviates from the average -- or ideal -- size, go here.

The population's changes are massive, but the legislature together with the governor have chosen to keep complete control of the redistricting process (except for possible court or Justice Department intervention) for another round. They will maintain their power, as they have in the past. Unlike California, there is little prospect for fair redistricting in New York State, only chaos similar to the last round. (To view my recent testimony in Albany on Redistricting Reform, go here and here.)