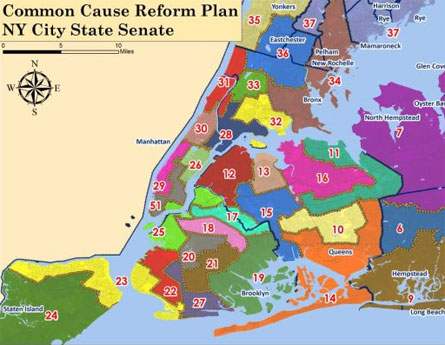 District Lines by Common Cause

With the preliminary redistricting maps to be announced next week, tensions are rising in Queens, where communities are split along legislative lines and rival plans to redraw them.

Many Asian-American groups, joined by some Latinos, have pushed for State Senate and Assembly borders to be redrawn around a single, cohesive Asian community which would cut across Queens and Nassau county lines. Others, led by the group Eastern Queens United, have categorically opposed this.

The groups’ main argument centers around what constitutes “communities of interest” and whether or not race and ethnicity is a key factor in determining these. Moreover, politicians and analysts have said that grouping voters from the two counties together will give Republicans an edge. Both sides have distanced themselves from party considerations.

“We were able to meet with numerous groups throughout the city and develop community boundary lines and narratives to accompany them,” said Jerry Vattamala, a staff attorney with the Asian American Legal Defense and Education Fund (AALDEF).

Asian-Americans are a growing population in New York. Over the past ten years, the number of Asians in New York City has risen from about 1 million to about 1.42 million, growing from 5.5 percent to 7.3 percent of the total New York population, according to the U.S. Census Bureau. Over 500,000 Asian Americans live in Queens.

The influx came mostly from immigration, according to James Hong, the Civic Participation Coordinator at MinKwon Center for Community Action, a Korean group. He said that many Asian-Americans who live in these areas have common interests, especially with regard to immigration law, language accommodations and socioeconomic concerns.

Despite their growing numbers, Asian voters are under-represented because their communities sit on top of many legislative partitions, according to AALDEF. Asian communities in Richmond Hill and Elmhurst are split into as many as six assembly segments, said Vattamala.

The current lines “absolutely split up Asian-American Communities,” said Hong. “The effect of diluting the Asian Vote has been very significant.”

In July 2011, 14 Asian-American groups including AALDEF and MinKwon have teamed up to form the Asian-American Community Coalition on Redistricting and Democracy (ACCORD), which has endorsed a proposed redistricting plan called “Unity map." The map was created by AALDEF, PRLDEF (Latino Justice group), the National Institute for Latino Policy and the Center for Law and Social Justice of Medgar Evers college. It was submitted it to the state’s legislative task force on redistricting.

But many other residents and politicians of Queens are opposed to the Unity plan, saying that it doesn’t make sense to put residents of Queens and Long Island in a single Assembly or Senate district. Eastern Queens United, which includes civic groups from Glen Oaks, Floral Park, New Hyde Park, Bellerose and Queens Village, said that the common interest of Queens communities far outweighs any common interests along ethnic lines.

“I understand the goal and agree with it but the way they’ve gone about it is not only inappropriate, it’s reverse gerrymandering,” said Avella, who has met with ACCORD and criticized its proposals. He said that the coalition’s proposals have only gotten worse since they were initially proposed and that they would give Republican legislators an unfair edge in Queens.

He added that as of October 12, ACCORD admitted to failing to consult with South Asian groups whose interests might be different than those of Chinese and Korean Americans. MinKwon’s Hong denied this claim, saying that ACCORD had met with many South Asian groups, including Taking Our Seat as early as July 11.

Still, many lawmakers and analysts think that combining sections of Queens and Nassau Counties would benefit Republicans because of the large number of conservative voters that live in Nassau. Arthur “Jerry” Kremer, a lobbyist and former Assemblyman said that there are no communities of interest that cross county lines that “it is not uncommon for minority legislators to find that their districts are cut up and combined with others.” He added, however, that significant change in Nassau County is likely this time around.

Both ACCORD and Eastern Queens United have denied that their proposals had to do with partisan considerations. Spokespeople for each have said that their primary interest is keeping communities together.

Senator Martin Malave Dilan said that the likeliest areas to see change in the coming redistricting process are in Queens/Nassau, Hudson Valley and the Saratoga area. However, Dean Skelos, the Republican Senate Majority Leader, said that the 63rd senate district will not be in Long Island. Eastern Queens United’s Bob Friedrich said that this was a good start while ACCORD offered no comment.

A previsous version of this article incorrectly named ACCORD as the author of The Unity Map.