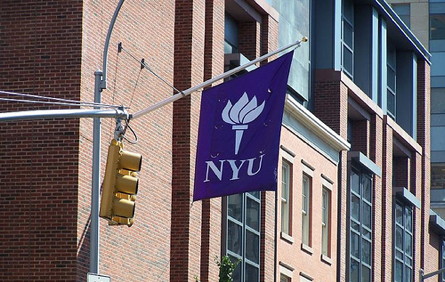 NEW YORK â€“ Disappointed but not surprised â€“ that was the refrain from groups opposed to the expansion of New York University's Manhattan campus after an influential committee voted to recommend a modified version of the plan 19-1 earlier today.

Members of the groups said they were weighing their options in their struggle to hold-up the expansion â€“ including by turning to the courts â€“ and even proposed an alternate plan that they said would be more environmentally friendly.

The City Council is expected to follow the land use committee's recommendation and approve the measure that would allow the university to expand by 2.45 million square feet in Greenwich Village.

The decisive vote in the land use committee came when the Village's representative, Councilwoman Margaret Chin, spoke in favor of the modifications negotiated between a sub-committee and school officials.

Chin said the changes took into consideration the most pressing of the community's concerns.

“Last month I didn't support the plan as presented,” she said. “But this new proposal strikes an appropriate balance. There were major modifications and significant concessions, and though not everyone gets what they want, it's a compromise.”

By comparison, Patrick Deer, an associate professor of English at NYU and a key member of NYU Faculty Against the Sexton Plan, called the changes “cosmetic" (The name of the group is in reference to NYU president John Sexton).

Groups opposed to the measure said the committee and its members had failed to uphold their responsibilities to constituents.

“Too many on the council abdicate responsibility by saying they'll do whatever the council person who comes from the district calls for,” said Andrew Berman, the executive director of the Greenwich Village Society for Historic Preservation. “But they're elected to govern the entire city, not just part of it.”

The university will also set aside $150,000 of funding as a good faith measure to demonstrate their commitment to upkeep of open spaces in the expansion area, a key component that they say ensures the university will be able to pay if they go into default.

According to Lynn Brown, the senior vice president of NYU, the proposal was a win-win for the city and the school, and would add to the "fabric of the neighborhood and contribute to New York City's economic viability.”

The modified plans include a change in the height of some of the buildings, addressing concerns about blocking light and views â€“ in particular, the building on the corner of Mercer Street and Bleecker Street will be lessened from 168-feet in height to 85-feet, which Chin applauded as a needed change.

The difference was demonstrated via two different images projected onto a screen that juxtaposed the sizes of the buildings. The images drew jeers from a frustrated crowd of anti-expansion advocates who wielded signs and used Occupy Wall Street hand signals to voice their opinion of what each speaker was saying.

Brown insisted the compromise “met the goals of addressing the community's needs,” calling the plan substantially different than the plan that was fought over in late June.

The lone dissenting vote came from Councilman Charles Barron, who encouraged his fellow land use committee members to “have the courage to vote no” on the proposal, which he argued failed to address a book-size list of complaints and concerns issued by the expansion's opposition.

“Did you read through all of the community's concerns?” he asked. “Because your presentation does not address any of them.”

These concerns, he said, stem from the air, water, and noise pollution that will come from the 20 years of construction that the expansion will take. “We need to listen to what the people who live in the neighborhood want and then send this back to the drawing board.”

While some other council members cited similar concerns â€“ not to mention NYU's failure to act like a “good neighbor” in the past â€“ they deferred to Chin, applauding her “hard work” in negotiating the compromise.

Even though she voted in favor of the changes, Councilwoman Inez Dickens had said Chin's reference to the “good faith” agreement with NYU regarding the neighborhood's concerns was insufficient.

“When we vote on this at the Council meeting next week, I want to see teeth in the enforcement,” Dickens said of NYU's responsibilities to maintain open space and work toward cleaner construction standards.

Ultimately, however, she said she would vote for the measure because “the area residents need those jobs.”

At least 25 percent of construction work must come locally from the area, the agreement mandates.

Meg Rooney, a graduate alumna actively involved with anti-expansion group that includes faculty, said they were committed to continuing the fight. But how exactly they would proceed was not yet clear, she said.

“There are a number of options,” she said, noting legal action was being considered.

Because of the number of faculty opposing the measure â€“ over 40 departments have voted against the move â€“ there has also been talk of a no-confidence vote in Sexton.

Alicia Hurley, another vice-president at NYU who attended Tuesday's meeting, said more faculty supported the measure than opposed it.

Despite the number of departments opposed to the move, which include Stern Business School and the Economics department, the university has 170 departments.

Earlier that day, the faculty group had presented their own plan on the steps of City Hall just hours before the land use committee was scheduled to meet.

Called "Room for Everyone: NYU Faculty's Green Alternative to 2031," Mark Crispin Miller, a professor of media, culture and communication, said it was a “green” plan in the “true sense of the word, unlike the "“green-washing” of the university's plan.

The proposal called for the re-purposing of space already owned by NYU that they said was either under- or inappropriately used.

The group pointed to administration buildings that could be moved out of the “core” of buildings in Greenwich Village, as one example, and a cafe that opened up in a school-owned building. This, added Deer, would accomplish the goal of expanding academic use of the available space.

The group of professors said that by NYU's own admission only 18 percent of the proposed buildings to be constructed in the next 10 years would go towards academic purposes, thereby undercutting the necessity of the expansion.

The remaining 82 percent would be for other uses, like a gym exclusively for student-athletes, a move that would allow the school to retain its NCAA credentials, as well as further administrative uses. More housing is also planned, but opponents questioned why it was required to be so close to campus.

The group also suggested the cost of the plan could well bankrupt the university. Most troubling, said Miller, was the lack of a business model explaining how the project would be paid for.

Although there is no definitive figure, NYU officials suggest the project will cost between $3 and $4 billion. Currently, NYU's endowment is at $2.83 billion, according to the faculty group.

NYU's Brown said the expansion plan is “essential” for the university to remain competitive.

She also said that concerns over funding were equally misplaced, adding that the university had successfully raised $3 billion in a fundraiser 4 years ago, an amount she is confident the school can easily exceed.

She also countered that NYU had built out at a rate of 200,000 to 300,000 square-feet per year over the past few years, and that the expansion plan would be consistent with that.

“We have some of the biggest real estate people on our board,” she continued. “They wouldn't let a project go forward if we couldn't pay for it.”

The university will provide “at least 7,500 square feet of the new Zipper building ground-floor space” to community use and a public atrium, according to information provided at yesterday's meeting.

An additional 6,000 square feet of “existing space for community use” will also be made available, they said.