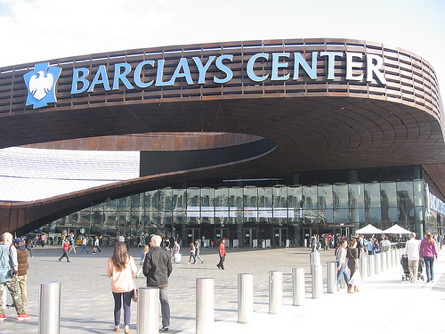 NEW YORK — The $1 billion Barclays Center — the frog-like stadium that is the centerpiece of Atlantic Yards in Brooklyn — opened last Friday with a mega-concert from Jay-Z, protests and some surprisingly enthusiastic reviews.

But it wasn’t long ago that it was the most debated construction site in the city, with residents in the footprint of the big development fighting to stop it with lawsuits and the developer trying to mollify the discontent with so-far unmet promises of new housing, jobs and economic revitalization.

Gotham Gazette has been reporting on the development over the past several years, looking at the use of eminent domain, the environmental review process and open space.

Here are a few highlights from the archives:

When Henry Weinstein bought a commercial building at 752 Pacific St. in Brooklyn 1985 he never expected that 20 years later the government would want to take it away and give it to a developer. Weinstein said that he would be shocked if his land was being taken for a hospital, a bridge or a library. But seeing it seized to make way for Forest City Ratner's Atlantic Yards project shakes his faith in the government. "This is the most un-American thing I have ever experienced," he said. By David Howard King. February 04, 2010.

Atlantic Yards and the Sustainability Test

Mayor Michael Bloomberg’s long-term sustainability plan, (PlaNYC2030), is aimed at stemming global warming and promoting energy efficiency by concentrating new construction near transit hubs and using green building technology. At the same time, the mayor proposes to reduce traffic in densely developed areas with congestion pricing, to encourage bicycling, and to build new public open spaces in every neighborhood. Forest City Ratner’s Atlantic Yards project in Brooklyn claims to do all of these things â€“ along with providing thousands of new apartments and jobs and bringing a major league sports team, the NBA Nets, to Brooklyn. By Tom Angotti. June 2007.

"A Garden of Eden grows in Brooklyn," announced the glossy brochure Brooklyn residents received in their mailboxes promoting the controversial Atlantic Yards development in Brooklyn. The brochure borrowed the words of former New York Times architecture critic Herbert Muschamp to promote developer Bruce Ratner's publicly subsidized mega-development slated to rise at the intersection of Atlantic and Flatbush avenues. In addition to building a Frank Gehry-designed basketball arena to bring the Nets to Brooklyn and 16 high-rises with up to 6,800 units of housing, the project promised open space and recreation for area with a severe shortage of parkland. By Anne Schwartz. August 2006.

Atlantic Yards: Through The Looking Glass

The Atlantic Yards story in Brooklyn is becoming a bit like the tale of Alice in Wonderland. In Lewis Carroll’s Through the Looking Glass, everything appears backwards, Alice is caught up in a giant chess game of powerful players over which she has no control, and the characters she meets talk nonsense. By Tom Angotti. November 2005.