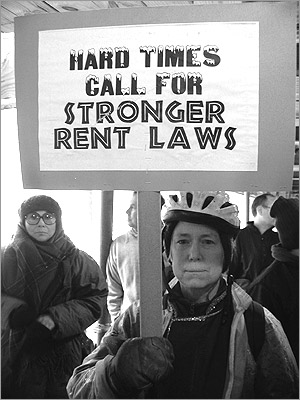 The rally outside Manhattan Housing Court last week started with a chant:

"Let's get ready to rumble," one speaker said, while the crowd stamped and cheered in the cold. "We went through this in 1997. We're ready for them again. This is the next civil rights movement."

"I live in a rent-stabilized apartment," the speaker continued.

Anybody not well-acquainted with the war over rent regulation might have been surprised to see that most of the speakers being cheered at this rally — most of the speakers, period — were members of the oft-invisible New York State Legislature. (The rent-stabilized resident, for example, was Assemblymember Keith Wright from Harlem.) All those who were present represent New York City, and all of them railed against their upstate colleagues.

For millions of New York City apartment dwellers, the decision that will determine whether they can remain in their homes or be forced out will be made not by landlords across New York City but by legislators 150 miles away in Albany.

With the current law set to expire in June, it is time for the state government to decide whether to renew rent regulation. While the exact size of rent increases in most regulated apartments is determined by the city Rent Guidelines Board, the state government decides whether rent will be controlled at all and, if so, under what circumstances.

WHAT THE LAW DOES

Rent control began in New York in 1943, dictated by the federal government as a means to prevent rampant inflation during World War II. After the war ended and price controls were lifted, the state moved in, allowing municipalities throughout the state to control rents. Today, the state's rent regulations protect 2.5 million tenants living in more than a million apartments in New York City alone. Fifty other municipalities in the state also regulate rents.

Tenants leaders and other advocates see rent control as vital to insuring that New Yorkers, many of whom are life-long renters, do not lose their apartments because of the vagaries of the real estate market. Opponents argue that rent regulation interferes with the housing market, removing incentives for developers and landlords to create more housing. (See related story )

In addition, landlords must renew their tenants' leases when they expire. And tenants have succession rights, meaning that they can pass their apartments on to a relative or a romantic partner. The rent laws also allow tenants to join tenant groups and fight for repairs without being retaliated against by their landlords.

The battle over enacting new laws is already underway. Tenant advocates have begun organizing rallies and lobbying state legislators to ensure that when the June 15 deadline comes around, the new rent laws will provide better protections than the existing laws do. Landlord groups have generally urged the elimination of rent control.

In 1997, the last time the law came up for renewal, Senate Majority Leader Joseph Bruno vowed to end rent regulations. The Democratic controlled Assembly passed its own bill renewing the rent laws well before the expiration date. But the Republican Senate did not move to consider the issue until the deadline neared, giving the Senate the leverage it needed to weaken the Assembly's bill.

By the time the measure passed, it was so weak that tenant advocates claim that one way Albany could guarantee the end of rent controls is simply to simply renew the rent laws as they currently exist.

The state's top two Republicans, Governor George Pataki and Senator Majority Leader Joseph Bruno, have both come out publicly in support of renewing the rent laws "as is."

Such a renewal "would cause a slow death for the rent laws," said Democratic State Senator Liz Krueger of Manhattan who sits on the Senate housing committee.

The Democratic-controlled New York State Assembly got an early jump on the issue when it passed its rent-regulation bill on February 3. The Assembly's bill adds some tenant-friendly provisions to the current regulations and would be in effect until 2008.

Currently, controls on apartments are lifted when an apartment becomes vacant if that apartment can be rented for more than $2,000 a month. The Assembly bill, A.2716a, would end the that.

Tenant advocates see this as crucial. "If this is not repealed," said Dave Powell, an organizer at the city-wide tenant union Metropolitan Council on Housing (Met Council), "It will be the death of rent regulation in New York City." Tenant advocates estimate that almost 100,000 apartments have been removed from rent regulations since 1993 because of this provision.

Powell believes that, with the way rents are increasing in New York City, landlords will one day be able to claim that any apartment could rent for $2,000 a month, which would mean that all apartments would be exempt from regulation.

"If you are a talented businessperson you can absolutely figure out how to get your apartments out of rent regulation," Krueger said.

Landlords are now allowed to increase the rent of a regulated apartment by 20 percent when it becomes vacant and to add on one-fortieth of the cost of any renovations made while the apartment is vacant.

The Assembly bill would reduce the amount that landlords can raise the rent on vacant apartments — the so-called vacancy allowance — to 10 percent of the current monthly rent. It would place under rent stabilization apartments built since 1974 under the Mitchell-Lama program, which provided incentives to developers to build middle-income housing. The current regulations do not include any apartment buildings built after January 1, 1974.

Though the Assembly's bill is more tenant-friendly than the current laws, it does not go far enough for some tenant advocates. Powell faults the measure for not repealing the Urstadt Law, which bars New York City and the other 50 municipalities around the state that have some form of rent regulation from enacting rent laws stricter than those of the state.

"In effect, the law allows the city to weaken the rent laws but not strengthen them," Powell said.

The Assembly's bill now moves on to the Republican-controlled Senate where it is expected to take on a decidedly more pro-landlord look.

"The Republicans controlling the Senate are opposed to rent regulation," said Krueger, who hopes the Senate passes a bill identical to the Assembly bill. "My Republican colleagues from up state do not understand what a housing crisis is like and why we in the city need rent regulations."

A spokesman for Bruno, refusing to talk specifically about what the majority leader plans to do, would only say that the "New York State Senate is dedicated" to providing affordable housing to New Yorkers.

The Senate seems in no hurry to move on the issue . "We have several months before the rent laws expire," said Mark Hansen, a spokesperson for Bruno. "However, the Senate has a much more pressing deadline of April 1, when we need to have a budget passed."

"We are starting ahead of the game this year," Krueger said, noting that in 1997, Bruno was "publicly on record wanting to end rent regulations, but this year he wants to keep them the same." Hansen noted that Pataki also wants to keep the laws as they are now.

The Met Council and other tenant advocacy groups plan to keep the pressure are already organizing to put pressure on and push for stricter regulations. On May 13, "Tenant Lobby Day" in Albany, advocates will hold a rally and lobby legislators. And on June 1 — only two weeks before the regulations are set to expire — tenant advocates will hold a rally at Union Square.