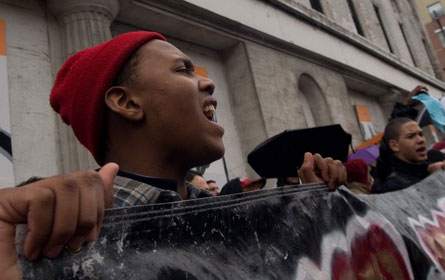 Photo by Joel Cook
Housing advocates and East Harlem residents rallied March 17 outside a vacant building on Madison Avenue. The action was meant to bring attention to warehoused property that could be used for housing, and to push for the City Council to adopt legislation to combat vacant property.

On a rainy June evening in the office of Rev. Billy Talen's mayoral campaign a group of New York activists, part of the Housing Not Warehousing coalition, discussed how to find housing for people who need it.

"What's the quickest way to get low-income people housing?" asked Rob Robinson, a housing organizer with Picture the Homeless, a grassroots group run by homeless and formerly homeless people.

Frank Morales, a housing activist, suggested direct action. Others agreed, saying they should take over vacant buildings. That is hardly surprising coming from a group who has taken "they say gentrify -- we say occupy" as a kind of slogan.

City lawmakers, though, are developing less confrontational ways to tackle the problem of vacant, or warehoused, property that could be used for affordable housing. The Housing Not Warehousing coalition, which consists of 30 organizations ranging from faith groups to anti-gentrification activists to public housing advocates, says that the legislation could be a major step in securing and sustaining affordable housing in the city.

In 2006, in tandem with Manhattan Borough President Scott Stringer, Picture the Homeless conducted a survey of vacant property in Manhattan, and found that 24,000 apartments could come out of the vacant buildings and lots they canvassed. The report noted that while the count only covered Manhattan, "highly visible clusters of boarded-up buildings in neighborhoods exist throughout the five boroughs." Picture the Homeless said that the vacant property could house the entire homeless population of New York City.

Landlords keep property vacant for a variety of reasons, according to Frank Ricci, director of governmental affairs for the Rent Stabilization Association, a pro-landlord group.

Ricci said many buildings remain vacant because the property is tied up in an estate or the landlord might think that using the property would not be profitable. Other reasons include structural problems with buildings, or property owners who tire of managing, Ricci said.

Mario Mazzoni, an organizer with the Metropolitan Council on Housing, a tenants' rights group and member of the Housing Not Warehousing Coalition, sees another factor. According to Mazzoni, gentrification is the main motivator for landlords to warehouse buildings.

"Warehousing today is all about gentrification. That's all it’s about," he said. "If you're holding on to a building, paying and maintaining the cost of taxes, sitting on an investment you're not profiting from, it's for a reason, and it's because you plan on making more money in the future."

For decades, vacant property above 110th St. in Manhattan, where there is a high concentration of warehoused property, was taxed at a lower rate than properties elsewhere in Manhattan. That lower tax rate made it less costly for landlords to keep the vacant property. A bill proposed by state Sen. Jose Serrano and Assemblymember Herman Farrell Jr. that equalized the tax structure passed in June 2008 and took effect at the beginning of this year.

The Bloomberg administration and City Council Speaker Christine Quinn have recently announced the Housing Asset Renewal Program, an initiative to turn vacant or stagnant condominiums into affordable housing. Other city legislators are looking for solutions to convert warehoused property into housing for low-income and homeless New Yorkers.

Councilmember Tony Avella, a Queens Democrat running for mayor, is working on a bill aimed at stopping landlords from keeping vacant property off the market.

The legislation championed by Avella, currently in draft form, would empower the city Department of Housing Preservation and Development to fine owners who keep buildings empty and would create a fund to "provide capital for the rehabilitation of distressed vacant units." Half of the rental homes that come on the market as a result of this legislation would be set aside for homeless people.

The bill has not yet been introduced in the City Council, and, according to Avella's legislative counsel, has encountered potential legal problems raised by council staff. Avella's counsel said that these barriers may include the 1971 Urstadt Law, which prevents the city from enacting rent laws stronger than New York state's, and a 1989 decision by the New York Court of Appeals that struck down a City Council law that imposed a moratorium on the conversion or demolition of Single Room Occupancy hotels. According to the New York Times, the court ruled that the law was unconstitutional because it "deprived owners of the right to determine how their property would be used."

Avella plans to continue to work on the legislation and to introduce it as soon as possible to move the discussion forward.

Councilwoman Melissa Mark-Viverito, who represents East Harlem, Manhattan Valley and parts of Mott Haven in the Bronx, is working on a companion bill focusing on city-owned vacant buildings.

The Mark-Viverito bill would mandate a citywide census count of vacant property. In addition, Mark-Viverito indicated that, as part of her bill, city-owned apartments that become available would, in at least some cases, be set aside for low-income people.

Since Mark-Viverito's bill targets city-owned property, it has a better chance of passing than Avella's bill. The city, however, owns only 7 percent of the total vacant property stock, according to the Picture the Homeless survey. City-owned housing has dwindled significantly since the late 1970s.

Despite the relatively small amount of property involved, Mazzoni said, "It's strategically smart at this point to focus on city owned property. There's a great deal of ability to influence what the city does with property that it is controlling."

Mark-Viverito's bill "is a step in the right direction," Avella said. "Obviously, we need to do a lot more, but even if we take a baby step at this point, it's better than nothing."

Andrew Doba, a spokesperson for City Council Speaker Christine Quinn, did not say whether Quinn would support either bill. "Affordable housing is a constant challenge in our city," Doba wrote in an email. "Warehousing is a complicated problem, and the Council is reviewing what can be done to ensure that decent and affordable housing is available to all New Yorkers."

At a meeting in April between Quinn, Mark-Viverito and members of Picture the Homeless, video provided by Picture the Homeless shows Quinn saying, "My goal is to get to a piece of legislation which Melissa [Mark-Viverito] will let me co-sponsor. ... And if I put my name on a bill, I'll do everything to move it. But I'm not going to put my name on it until I know that we can do it legally."

If the arduous legislative process does not produce anything, Robinson says the Housing Not Warehousing Coalition is prepared to take matters into its own hands by using direct action and civil disobedience.

During a period of economic distress, "the time is good for this type of thing to happen, but we really have to seize the moment," said Robinson.