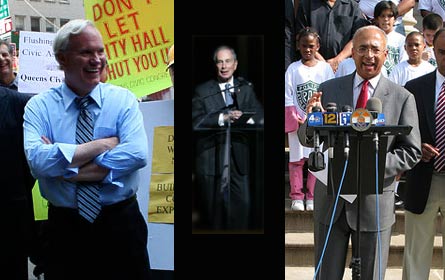 As they seek to chip away at Mayor Michael Bloomberg's many advantages in this year's mayoral race, his challengers hope to find votes in communities throughout the city where residents may see the mayor as having ignored grassroots, neighborhood-level politics. While Bloomberg's campaign mailings and releases stress the city's diverse population, interests and communities, his big picture approach, his opponents charge, ignores the importance of civic involvement at the community level.

City Comptroller William Thompson Jr. and City Councilmember Tony Avella, the two candidates in September's Democratic primary, are waging increasingly strong challenges to Bloomberg in the city's hundreds of neighborhoods. And Green Party candidate Billy Talen continues to raise his faux preacher's voice in the five boroughs. Many of the concerns moving the debate have to do with neighborhoods. After all, issues like zoning, neighborhood preservation, and affordable housing are surely among the most important ones on the streets where New Yorkers live and work.

I asked the two Democratic contenders for their views about Bloomberg's policies and how they would do things differently in the city's neighborhoods. I also asked them for their views on the role of community boards and the planning and budget process.

While both candidates criticize Bloomberg for being a "top-down" mayor and want a larger role for communities, Avella is the one with a long record of advocating community involvement. As chair of the council's Zoning and Franchises subcommittee, Avella has staked out a role as one of the most consistent critics of Bloomberg's land use policies. Though Thompson may have the edge on Avella in the polls, when it comes to neighborhoods Avella seems to have been there longer and ready to go much farther.

On the other hand, based on their responses to questions, it is hard to find substantive areas where Thompson and Avella disagree, and the differences may be more in the degree to which they want to break with the Bloomberg years and its imperial mayoralty.

Both Democratic contenders believe Bloomberg has ignored the specific concerns of individual neighborhoods.

Thompson said, "The mayor too often acts unilaterally, with no collaborative planning or community engagement. He has decided what the communities' priorities should be without talking to community boards and spending any time in these neighborhoods."

As examples of what he sees as the mayor's disregard, Avella cites the administration's extensive rezoning of city neighborhoods and notes that he opposed controversial rezonings such as 125th Street in Harlem and the recent Coney Island plan, which he said "will destroy that area's amusement character." But, in Avella's view, the problem goes beyond individual plans to the mayor's underlying approach. "Real estate controls the agenda. They [the city's planners] don't do planning, and they are reactive to real estate development," he said.

Avella said he supports rezoning in general and points to his backing of contextual rezonings in Queens, which are intended to reshape new development so it will be more consistent with existing buildings in the area. But, he said, the administration puts pressure on neighborhoods to allow new development in order to get the contextual rezoning they want from the city. "Communities should get protection without having to give something up," he said.

Avella also slammed the city's mixed-use zoning, which allows a combination of residential and industrial uses in a community, as "a dismal failure that resulted in the destruction of the manufacturing base."

Thompson shares many of the same views. "Much of the zoning and rezoning we see today has been driven by the mayor's desire to create real estate wealth, not to improve the lives of people in these communities," he said. "These rezonings have zoned out of existence nearly 20 percent of our available manufacturing space. Just imagine if instead of focusing so intently on zoning and real estate we had instead worked to create affordable housing, infrastructure, schools and jobs."

Avella has been a vocal critic of developer-initiated and controlled plans such as Atlantic Yards in Brooklyn. He also opposed the plan for redevelopment of Willets Point in Queens, prepared by the city's Economic Development Corp. Avella's approach favors "bottom up" planning that involves local residents and businesses and does not resort to the use of eminent domain to promote private real estate projects

To accomplish this, he has been a vocal advocate for community-based planning and has worked with the Municipal Art Society to craft legislation that would support communities that do their own plans. "I've been saying these things all along. Other cities are ahead of us. Community planning sets the stage for all of the issues in neighborhoods. We shouldn't just give neighborhoods opportunities to plan but also the funding to address their needs," he said.

There are around 100 community-based plans in New York City, but according to the citywide Task Force on Community-based Planning they do not receive sufficient support from city government. (I am a member of the Task Force).

Thompson also calls for more -- and more strongly supported -- community plans. "Community-based planning that includes input from local community boards, elected officials, and other stakeholders is incredibly important and, like community board budget priorities, should be better incorporated into an overall citywide framework," he said. "Once developed, zoning changes and siting of facilities should be considered in the context of these collaboratively created plans."

"Urban planning," said Thompson, "is about so much more than real estate or finding ways to accommodate population growth. It's about stepping back, looking at our city and asking ourselves what do we want New York City to look like in 10, 20 or 30 years. We should decide what we want our communities to look like first and then develop toward that goal. We need a vision of a livable city, not an accommodation, and I believe that comprehensive neighborhood plans are required, not merely zoning changes."

The city's 59 community boards provide a means for those kinds of local concerns to be heard and considered. Both Democratic candidates state they would strengthen the panels, whose role is advisory, and they assailed the mayor's efforts to weaken, if not eliminate them.

In particular, Thompson criticized the mayor's effort - later withdrawn -- to cut an average of $35,000 from the budgets of individual community boards, which average less than $200,000.

"I strongly opposed these cuts." Thompson said. "Community boards are the primary way most New Yorkers participate in and interact with our city government. They are also a vital source of information for millions of New Yorkers. â€¦. We need to invest more time and resources in training community board members."

Beyond that, both contenders think the city should listen to the community boards. "I would absolutely change the way the city deals with community boards," said Avella. "They're going to have some real power."

Thompson sees community board members as "knowledgeable, dedicated, conscientious and passionate. They understand the process, needs, issues and character of our communities better than anyone. That's why community board budget priorities must be better incorporated into the overall city budget framework."

In his almost eight years as a "big picture" mayor, Bloomberg's biggest picture item has been PlaNYC2030, the long-term sustainability plan he unveiled on Earth Day 2007.

"Great press release," says Avella. "PlaNYC2030 is a nice outline with a lot of good things in it but they don't lead to changes. Except for congestion pricing, which really won't affect the environment" -- and which, of course, failed to win approval from the state legislature.

Thompson, on the other hand, criticizes the mayor's plan because it "is all about infrastructure, not people. There is scant mention of the need for affordable housing, even though the plan anticipates a million more New Yorkers by the year 2030. We certainly need a long-term plan to meet our city's anticipated population growth. But that plan must consider and incorporate economic development, affordable housing, job creation and expansion of human services."

The Big Picture and the Hood

In many respects, PlaNYC2030 encapsulates the mayor's top down, big picture approach, which has won him fans in much of the business community and part of the media. On the big-picture questions of the budget, government efficiency and long-term sustainability, Bloomberg, to them, seemed a natural. So it is not surprising that the leading pundits and pollsters have rushed to confirm the election as a "done deal." But voters tend to view city politics as both a top down and bottom up process. For Democrats, a key question may well be whether their calls to strengthen the role of communities will make a difference on Election Day.

Tom Angotti is [rofessor of urban affairs and planning at Hunter College, City University of NY, editor of Progressive Planning Magazine and a member of the Task Force on Community-based Planning.