In the climactic Battle of the Bands in Jack Black's 2003 movie "School of Rock," a band of fifth grade preppies out rocks the older, better-known competition. But the preteen rock group was not the only underdog in that scene. The theater where the battle took place - the St. George on Staten Island - also faced long odds and, for now, seems to have overcome them.

Once an ornate showcase, the St. George had fallen into disrepair by the time "School of Rock" was filmed. Efforts to revive it as a roller rink and nightclub had proved unsuccessful and so, while never officially shut down, the theater remained largely vacant and unused.

Today, the St. George has been restored to much of its former glory - without the benefit of landmark status or government money. The revival of the St. George Theater is largely the work of one family that set out to save it and create a showcase on Staten Island. 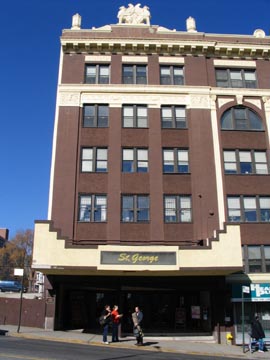 The story of the St. George is the story of what a few individuals can do. But the theater also provides evidence that buildings without landmark status can be saved. The St. George Theater is among many notable buildings - various houses of worship and the New Victory Theater are among the others -- that have been preserved without receiving landmark status. Meanwhile some landmarked buildings, such as the Bronx Courthouse, stand vacant and in danger of deterioration, and the landmarked smallpox hospital on Roosevelt Island remains a ruin.

The St. George Theater opened in the St. George section of Staten Island, a short walk from the ferry terminal, on December 4, 1929. Designed by Eugene DeRosa, with the assistance of Staten Island architect James Whitford, its exterior was nothing particularly remarkable. But, inside the building offered an array of lavish and ornate detailing, much of it with a Spanish flavor -- faux wrought iron balconies, heavy chandeliers and painting of bullfighters and villas. The 3,000-seat theater also offered some amenities that were notable for its time, including much unobstructed seating, a $25,000 Wurlitzer organ, and an advanced heating and cooling system.

The theater thrived as a setting for live performances until the 1950s. Then it served as a movie theater until the 1970s. Various attempts were made to convert it to other uses - the orchestra pit was filled for its brief incarnation as a roller rink - but, except for the "School of Rock" filming, the theater remained largely shut down for 25 years.

In 2001, then Mayor Rudolph Giuliani proposed using city money to help turn the theater into a cultural center. But according to the St. George Theater's Web site, the plans were derailed by the September 11, 2001 attacks. Those who valued the theater worried that it might be demolished, and in 2002 preservationists launched a drive to save it. But that effort faltered.

Then Rosemary Cappozalo entered the picture. A dance teacher known on the island as Mrs. Rosemary, Cappozalo and her daughters, Doreen Cugno and Luanne Sorentino, set out to save the St. George. They persuaded the theaters owners to transfer the lease to their non-profit group, the Richmond Dance Ensemble (the owner got a tax deduction) -- and began making renovations. The ensemble remains the legal owner and operator of the theater.

The St. George posed a real challenge. "It hadn't enjoyed a good life in 30 years," Cappozalo said. "When we came in, the ceilings in the bathroom were on the floor with water coming inâ€¦Some of the holes in the wall were larger than our own bodies." Broken cinder blocks littered the floor, the plaster was broken, the skylight above the stage was beyond repair. 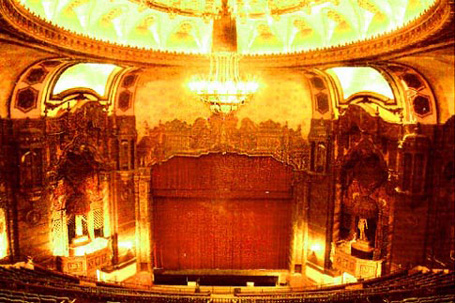 Cappozalo began by fixing the roof, then continued from there, doing the necessary things first. The seats have been replaced or reupholstered and the stage features a new $70,000 fiberglass curtain. She sewed curtains for the bathrooms and dressing rooms and has arranged artificial flowers. Much of the plaster has been restored, though the rotunda still needs work. "We did try to restore and not modernize," Cappozalo said.

The detail work is astounding. Virtually no surface in the theater is without decoration. Fancy plaster medallions adorn some ceilings, while more plaster -- borders, swirls and relief work of all types -- frames paintings and bedecks balconies. Much of this needed to be fixed and painted. A dispute with the city over fire regulations further complicated the renovation.

So far, Cappozalo has paid for most of the renovation herself, using hundreds of thousands of dollars of her life saving from 41 years as a dance teacher on Staten Island. She will not linger on the question of why she took on the project. She knew the theater from her years in dance in Staten Island and developed an appreciation for it. "There are so few theaters across the country like this," Cappozalo said. If no one had stepped in to save it, she said, "it would be destroyed or become a mini-mall."

Cappozalo has sought donations for the theater from individuals and foundations. But her main focus is to stage shows and rent out the space both to bring people into the theater and to raise money for future work. In her restoration she focused first on work that had to be done so the theater could open and function. "We had to get this place to feed itself," she said.

Since the theater officially reopened last December, a number of shows have appeared there, including plays for children, "Beatlemania," a concert by comedian Howie Mandel, and a Christmas show similar to the one at Radio City. Later this year, the theater will be the scene for a Golden Oldies show, performances by Alvin Ailey American Dance Theater II and another Christmas extravaganza.

With any money that comes in, much remains to be done, Cappozalo said, including repairs in the basement, a restoration of the marquee and more plaster work. 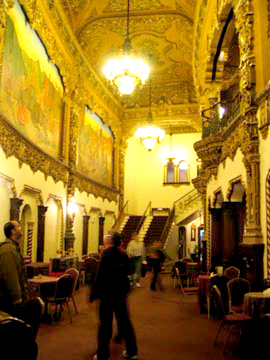 Cappozalo has not applied for landmark status for the building and says she does not want it. If the building were landmarked, she says, any renovation would take too long, making it difficult for her to generate the income she says she needs to keep the theater going.

Some critics might say that, in going this route, Cappozalo has had to cut corners - to change the building more than purists would like. For example, restoring the 1929 pipe organ would take years, she said. And so the theater uses a very large electric organ instead.

But her efforts have generally met with enthusiastic praise, and she has received a number of awards for the project.

Some worry that, without landmark status, the theater will survive only as long as Cappozalo and her daughters have the money, the energy and the will to keep it going. These fears are fueled by efforts to develop St. George, an area that had fallen on rough times but which Cappozalo says is "up and coming." The Staten Island Yankees minor league baseball stadium is nearby, luxury housing is planned for the area and a Chamber of Commerce Web site announces, "Remember Park Slope, Hoboken and Williamsburg? Downtown Staten Island is next."

On a Web page about the theater a reader wrote in, "You guys better get this theatre its landmarks status. There are plans in the works for someone to buy it back â€¦ and to level the entire block to make way for a tall residential tower, as well as commercial space."

"The theater will not be sold," Cappozalo's daughter, Doreen Cugno responded,"

And Cappozalo is focused on future plans for the St. George and the Richmond Dance Ensemble. "We envision a good life for the theater," she said.