With large national chain stores having solidly established themselves in much of the city, Duane Reades and other discount drug stores occupying spaces once used by mom and pop businesses, and banks appearing on every street corner, many locally owned shops have shut their doors. Recently, the Municipal Art Society sponsored a panel discussion on locally owned retail in New York City: Can it survive and what can, or should, be done to save it.

The following comments are excerpted from the discussion.

The 8 million people in New York City are being jumped on by the 292 million people who live on the mainland of the United States. They are trying to push their retail ideas on us, and it’s not good. We have to stand up to this, keep our neighborhoods strong and keep merchants in business. But we can do it. The opportunities are unlimited.

Even with the chain stores, you can still go into the retail business and be successful in New York. Maybe we have to cede the rights to have these mall-type stores in Manhattan because, if I’m a landlord and I can get a chain or a bank or a pharmacy to pay a high rent, I would probably think about it. But there are great facilities available in the Bronx and in Brooklyn. There is always something in each neighborhood that is available and can be developed.

You should take some of the parking garages around the city, get rid of them and let the city make that into space exclusively for small businesses. We don’t need cars. We don’t need parking. We have fantastic public transportation. If we got rid of cars and took all the lots and made those into locally owned retail we could go some place. We could set up pushcarts again. We would be healthier, and we would be able to have great shopping.

Chelsea Market provides an example of how this can work.

In the middle of the 1990s I was fortunate enough to find the old Nabisco buildings on the West Side. And I was even luckier to have investors in Tashkent, Uzbekistan and in Siberia. When I told them what we had purchased for them in Manhattan, the Russian said, “Aha, the capital of the United States.”

At these meetings, I was the only one who was born in New York City. And I realized one of the great strengths of our five little boroughs is their ethnic diversity. And I said we have to take advantage of that.

And we have to run counter to what everyone else is doing. I was able to convince my investors that just making a lot of money from retailing was not the function of a great, old building of historic significance in New York City. There was something more that the people had to have. So my daughter and I, working together, set some standards.

We said first, every one of our tenants has to be a family owned business, at least half of the businesses have to be female owned, the owner of each business and its executive offices have to be located in Chelsea Market, and the tenants have to be both wholesalers and retailers. That is because when the economy in the city was good, their wholesale business selling to restaurants would be good. But when business slowed down, as it did after 9/11, the tenant could stay in business because their retail operation would cater to the people who were not going out to restaurants. 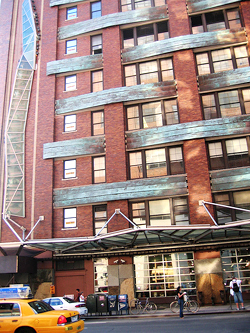 It was a bit crazy, but it was a social experiment. You have to have a social conscience. But it worked out very, very well.

We have Manhattan Fruit, which did business out of a truck and a very small freezer on 15th Street before it came with us. The Fat Witch Brownies operated from her kitchen. And the man who makes the gift baskets ran his business from his living room.

If you create a market â€“ a concentration of people in similar businesses â€“ you can create stability and establish a location where people will feel comfortable shopping without name stores. Every single tenant in that building that started nine or ten years ago is still there. Our biggest problem is that we don’t have enough room.

The market has to be an experience. At Chelsea Market, you are walking through a street that happens to have a roof on top. I kept it very cool in the winter and warm in the summer because you have to feel as if you’re outside.

We located the tenants haphazardly. Each was chosen for a very, very strong reason. “Can you get what this tenant makes any place else?” And if the answer was no, that was the tenant that we wanted. And that’s why people come back.

We created a neighborhood by having the owners on premises. If you had a little complaint about any of our tenants, they would be in your face in 30 seconds. “You don’t like the recipe? My grandmother used this recipe. She used it in Russia. How can you say it’s no good?” And the owner would take you into her kitchen and show you the ingredients and how she prepares them.

We brought all of the production to the front where people could see it. When we first opened, I could gauge the amount of customer activity and acceptance by the number of nose prints on the glass in front. People would come in with notepads and become specialists in cooking. People come in and watch today the way Amy puts her bread together. And it works.

And there are other opportunities, An example: La Marqueta under the elevated Metro North tracks going up from 111th Street. The state Economic Development Agency said, “Give us some ideas about what we can do to bring La Marqueta back.”

I said, “It’s a good idea, but two blocks of La Marqueta is not the answer. You need a mile of La Marqueta.” And they said, “How are we going to fill it up?”

So, we went into a store on 116th Street where the people were from Senegal. The owner sold leaves that people press at home and use to make tea. And I said, “I have a new business for you. You’ll set up a tea shop and you and all the people that we get into La Marqueta will develop a market â€“ a concentration of wholesalers and retailers.” With that, the owner said something in his language and his entire family came out from behind a curtain â€“ they were living in the store â€“ and one of them said, “I will translate. My father will go to work in La Marqueta and my mother and I will stay here, ”

That’s New York. We can do it.

I am now working in the South Bronx, in Hunts Point, trying to change the way Hunts Point conduct its retail business. In the next six to a year, you will see what I’m planning to do. We are going to have hundreds of family-owned businesses operating. I’m trying to use that as a model for the rest of the city.

There is plenty of business for everybody. We have many great people in this city who know how to cook and how to sew and how to weave but they don’t have the opportunity to show their wares so they work as bricklayers and they have to work in factories. They could run their own businesses and train their families.

But for it to happen, there have to be people who are willing to take the risks and go against the 292 million people who are generating these malls. It can be done.

--Irwin Cohen is the chief of ATC Management and developed Manhattan’s Chelsea Market.

A Will To Preserve Character

New York City is a city of neighborhoods. We have recognized there is an issue, if not a problem, and that is the loss of the character of those neighborhoods.

Once every neighborhood has the same stores -- Starbucks, Rite Aid, Papa John’s Pizza, and all the others â€“ there is no reason to go from neighborhood to neighborhood. It happens now when you travel. Eat at a TGI Fridays in Salt Lake City, it is like eating at the ones on Long Island. New York City is, along with Boston and Philadelphia, one of the older cities in North America, and we need to be at the forefront of preserving character, which is ultimately what makes people who visit New York come back to shop.

The problem is once you put the independent druggist out of business, where is he coming back from? Once Home Depot and Lowe’s put out the local lumberyard, they’re gone.

We do not have a plan or a vision to address this. The city operates on a reactive basis. Everything we are talking about is a reaction to something that we don’t like, something that is happening to us, to our neighborhood, to the local stores, the corner drugstore, etc.

There are many things that can be done. First there must be a will to preserve character. My firm has worked with some communities where people didn’t even think they had a “character.” It was being lost due to ignorance and neglect. So the first thing we need to do is educate communities as to what they actually have. We meet the community and work with them on what they see their neighborhood’s character as being: What do you have? What do you see as the positives, what would you like to improve, how can we best preserve what you have?

The same criteria Irwin Cohen used for tenants in Chelsea Market can be used by communities, if they are organized, working with the city and the state to help with funding and with regulations and guidelines to help preserve the neighborhood character that makes a place special.

I like the fact that these are independent, hard-working, mom and pop stores and retail that I want to support. That’s why I live in New York.

--Victor Dadras's architecture firm works with neighborhoods to preserve the character of their downtowns and their main streets.