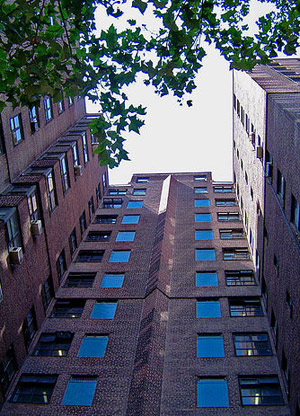 Tino Hernandez, who recently resigned after seven years as chairman of the New York City Housing Authority, was a low-key figure who competently steered the authority through Bush administration cuts designed to kill public housing. While Hernandez may have been a quiet leader, and left under a cloud of bad press about elevators, his impact on the authority's direction was significant. Under his tenure NYCHA administrators initiated wide-ranging management reform -- adopting some private sector methods and emphasizing non-governmental sources of revenue -- in the hope of saving this massive housing system.

Tenants, employees and many housing advocates have expressed legitimate concerns about outsourcing work to private companies and rent increases, but taken as a whole this "new" direction looks a lot like the original vision of public housing. NYCHA's founders in the 1930s never intended to isolate public housing residents from market forces or private sector management. They envisioned a vast system filled with working people paying a reasonable rent for quality, moderately subsidized housing.

Public housing was also a key element in rebuilding neighborhoods to attract private investment; private contractors built the projects; and private entities often played a role in upkeep. New York's system was largely built under this model, making it dramatically different from troubled public housing in cities like Chicago and St. Louis.

From the late 1960s to the 1990s, however, politicians forced NYCHA administrators to accept a welfare state model of absurdly low rents, more welfare tenants and skyrocketing labor costs. NYCHA projects became isolated from the mainstream of New York life. New York still did better a better job managing its projects than other cities, but social problems and management challenges multiplied.

Since the mid-1990s, and mostly under Hernandez's guidance since 2001, NYCHA began to embrace the notion that public housing cannot survive in America without some market discipline and private sector participation. The hubbub over elevator outages and budget shortfalls at NYCHA has obscured not only the decent state of NYCHA housing as a whole, but also a more important shift in philosophy. Economic reality matters once again to NYCHA.

New York's new direction does not include the dramatic demolition and private redevelopment that has accompanied outright privatization of housing projects in cities such as Chicago. Nor are NYCHA's projects likely to be sold to tenants or investors. The 178,000 apartments managed by NYCHA will remain as comparatively affordable housing into the future. Declining subsidies, and an ideological preference for private sector approaches, have nevertheless inspired so many distinct reforms that the system as a whole is quite different from what it was just a decade ago.

What does market-based reality in New York's public housing look like? It starts with moving toward realistic rents. Rents became so out of line with operating costs that they threatened to sink the authority in the long term. Even after recent increases, average apartment rents are still only $378 per month.

At long last the top earners in the current tenant population (about 25 percent of tenants) pay more and will pay more in the future. A "working family preference," which favors working families in the admissions process, has so improved the mix in New York's projects that the authority can now turn to these families to make up, in part, for declining subsidies. In 2008, for instance, NYCHA collected $788 million in tenant rent and only $803 million in federal public housing subsidies. This robust collection is possible because, contrary to popular perception, only 12 percent of current NYCHA families subsist on welfare and over 45 percent are working families. (The other 43 percent are seniors and the disabled.)

NYCHA isn't going upscale overnight. By federal law, rents remain capped at 30 percent of income; average family income is still only $22,000; the state government is increasing payments for welfare families; and the federal Department of Housing and Urban Development has approved the use of Section 8 vouchers in some projects.

The working family preference, however, is likely to tilt the balance from the very poor. New York is moving from a model of welfare state public housing, where public housing serves the neediest as a government social program, back to its roots as a system of partly self-supporting affordable housing for the city's working class. This shift certainly raises the question of what is to be done with the very poor, but we know for certain they should not be concentrated in NYCHA projects.

Changes in the Projects

Tenants paying more rent will also demand a level of service equivalent to that found in private housing. Some already are. The $107 million plan to replace and maintain elevators may reflect the rising expectations of residents. Working families also can create a culture of achievement and decorum. Respect for buildings and equipment, more common in private housing where tenants understand the relationship between vandalism and rental costs, will hopefully reduce the burden on NYCHA budgets and staff in the long run.

Another sign of the declining public character of public housing is the closing of many community centers and shifting of community programs (for youth, seniors, the unemployed, etc.) from NYCHA's purview. The federal government never provided much support for this mission, leaving NYCHA to shift funds around to cover its community operations.

Those days are coming to an end. Many community centers and programs will, in 2009, either close or be signed over to city agencies and non-profit organizations; hundreds of positions are being eliminated to save millions annually. The long-term effects of these changes will depend entirely on the degree to which already strapped public and private agencies pick up the slack. NYCHA's retreat from running social programs has been widely criticized but it is in line with the original intent of NYCHA's founders who welcomed nonprofits into public housing and never intended to run social service or community programs from the top down.

Private sector approaches are evident in labor policies generally. Private contractors have always been a key element of NYCHA's management style, but the scale is changing. The number of direct, public housing employees has shrunk dramatically over the last few years. Today 12,400 staff members maintain a system of housing for over 400,000 people, down from a high of 15,000 employees. NYCHA administrators have largely preserved field staff on the grounds (janitors, elevator repairmen, etc.), but management offices at many adjoining developments have been merged and private sector contracting is on the rise. Private contracting now includes much construction and renovation work, technology upgrades, and even legal services. Many of the small, scatter site developments are entirely managed by private contractors.

Private employees are more economical in the long run than unionized employees who receive high wages and generous benefits regardless of financial conditions. Unionized staff is good for the city's financial health, but only made sense in the context of strong subsidies. No one knows, however, if fewer people and further innovation will yield better maintenance in the long term. New York sorely needs a non-partisan Straphangers style evaluation system that can make sure NYCHA lives up to its stated standards. (is a sample of what this might look like).

A promising aspect of the private sector management model is the introduction of a centralized call center for tenant complaints staffed by NYCHA employees. This service has proved extraordinarily popular with tenants and gives reason to hope that more can be done with less.

The disposition of NYCHA's vast land rights is the least advanced but potentially most dramatic change initiated during Hernandez's tenure. This process also harks back to NYCHA's founding years when public housing was a key force for leveraging private investment in tenement slums. Many of NYCHA's traditional public housing complexes are mostly open space, and this land has been underutilized, for decades. The buildings of Riis Houses on the Lower East Side, for instance, cover only 20 percent of the land. Middle-income and affordable housing, built through a partnership of different housing agencies, already is under construction on the grounds of some developments. Pressure is also being felt to sell air rights, valued in the millions, to brighten NYCHA's balance sheets.

The upside of this process, should it gain traction, will be more revenue for renovation and daily operations as well as greater social and architectural variety. New construction, if creatively considered, offers the opportunity to knit NYCHA towers back into the city as a whole.

What could public housing look like in the long term if these methods are successful? Housing projects still will be affordable compared to their neighbors, but not as cheap as they are today. More working and lower middle-class families, and new developments on NYCHA land, will help break up remaining concentrations of poverty. Standards of maintenance and upkeep will be higher in spite of fewer employees. Non-profits and city agencies will run great community centers. Far less subsidy will be demanded, and NYCHA will balance its budget. Such a system would, in fact, be the realization of the founders' original intent.

Less rosy scenarios are quite possible, and questions of equity remain for both tenants and workers, but applying private-sector approaches in New York could actually preserve public housing. If it does, this will, in no small measure, be part of Tino Hernandez's legacy.

Nicholas Dagen Bloom is an associate professor at New York Institute of Technology and author of "Public Housing That Worked: New York in the Twentieth Century."