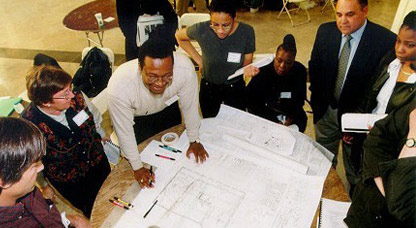 Photo (c) WE ACT
Since the late '80s, environmental activist group WE ACT has been working to improve environmental health in northern Manhattan. Here, they partner with Community Board 9 to organize the Harlem-on-the-River Project.

At 7 a.m. on Martin Luther King Day, 1988, the founders of the soon to be formed West Harlem Environmental Action (WEACT) donned gas masks and placards, and held up traffic on the West Side Highway in front of the North River Sewage Treatment Plant. For the two years since it opened, the sewage plant had plagued the Harlem community with foul odors and noxious emissions that residents blamed for their respiratory problems.

Twenty years later, WEACT has 17 staff members dedicated to mitigating the disproportionate environmental burdens that Harlem residents bear and, more recently, to fighting for climate justice. Since PlaNYC2030's launch in 2007, WEACT has lobbied to make sure the proposal's benefits extend all the way uptown. Now it sees the effort as paying off in a variety of ways that could improve public health and the environment in Upper Manhattan.

A History of Activism

WEACT's fight against the sewage treatment plant did not end with a demonstration. Four years later, the organization sued the Department of Environmental Protection for operating that plant as a public and private nuisance. After six years of litigation, the city settled the North River Sewage Treatment Plant suit and established a $1.1 million fund to address community concerns. The fund enabled WEACT to hire three full-time staff members and allowed the group to ensure that the city completed its $55 million renovation of the plant.

WEACT filed a complaint against the Metropolitan Transportation Authority for locating a disproportionate number of its bus depots and other facilities in northern Manhattan. The area still houses six out of the city's seven diesel bus depots. In 2004, the Federal Transportation Authority validated the MTA complaint. Also that year, WEACT successfully blocked the reopening of the 135th Street marine waste transfer station on the grounds that the station would bring even more pollution into an area that already had more than its fair share. All the while, WEACT staff continued to educate Harlem residents about the environmental issues that threaten their health and well being. 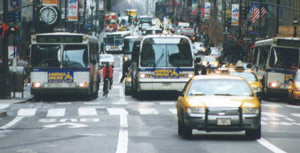 Photo by WE ACT

A decade ago, the organization began lobbying the MTA and the state to use cleaner fuels and added global warming to its agenda by joining national and local climate justice initiatives such as the Environmental Justice Climate Change Initiative, and the Campaign for New York's Future. "The most vulnerable communities even in the richest nations will be those who are first and worst impacted," explained WEACT deputy director Cecil Corbin Mark. "So we have begun in the last three years to work on increasing our community's awareness of the health impacts of climate change and to have them understand some of the policy issues that are involved."

As the effects of climate change become increasingly apparent, WEACT has geared its local efforts toward adaptation. For instance, Corbin Mark said that WEACT is addressing questions such as, "How does our community adapt to this? If we know that climate change is coming, how do we as communities become prepared to deal with that reality? Part of it is reducing our carbon footprint, reducing our impact on this moving train of global warming."

That, of course, is also one of the key goals of PlaNYC2030.

In 2006 Mayor Michael Bloomberg invited WEACT founder, Peggy Shepherd to participate on his Sustainability Advisory Board and help draft PlaNYC2030. Shepherd and her organization saw a golden opportunity to ensure that the plan addressed justice issues.

One example is the city's Million Trees Program. According to Corbin Mark, WEACT has "been very focused on ... trying to make sure we get as many of those million trees as possible planted in northern Manhattan. ... The more trees we can get planted â€“ and hopefully they grow quick and fast and big and tall -- the more we are able to offset the heat effect that we have going."

Another of PlaNYC's strategies to offset the "urban heat island effect" is to encourage green roofs, roofs that are at least partially covered with vegetation to absorb storm water, reflect sunlight and insulate the building. To launch that effort, WEACT is raising funds from private donors for its "From Tar Beach to Green Roofs" initiative to create green roofs all along 125th Street. It plans to start with some of the public buildings, including two schools where students will be involved in the design process.

WEACT also intends to capitalize on PlaNYC2030's attention to greening buildings through retrofitting. Here again, the plan offers the group an opportunity to further long-standing goals of educating Harlemites about indoor toxins such as lead paint, mold and rat poison.

"I think that is a real frontier for us as we think about healthier homes and a better housing stock for our community," said Corbin Mark, "One of the things we constantly deal with in northern Manhattan is landlords using dirty grades of oil" in their boilers. Accordingly, WEACT is working to fund programs that will help landlords not only to retrofit their boilers to require less oil, but also to use cleaner, more renewable energy sources.

Finally, according to PlaNYC2030, no New Yorker should live more than a "10 minute walk from a park." WEACT would like to see those new green spaces in Harlem serve multiple purposes. The organization wants to green local school yards with vegetable gardens. The gardens would be accessible to community members, and would involve students in growing their own food, while teaching them about healthy food choices.

Thus, this initiative addresses green space as well as childhood obesity rates and diabetes. In 2007, the East and Central Harlem District Public Health Office reported that more than one in four children in the area's Head Start programs and public elementary schools are obese, and the New York City Department of Health and Mental Hygiene estimates that adolescents account for 45 percent of Harlem's diabetes cases.

If PlaNYC2030 is to improve the ecological and social environment in Harlem, the community will have to work with city officials. This can take effort on both sides.

As an example, Corbin Mark cites the city's climate change training session in East Harlem last spring. "The mayor's staff reached out to us and worked with us to develop something," Corbin Mark said. But Corbin Mark advised city officials that their one-size-fits-all approach would not work. Rather, the training had to be culturally and geographically sensitive.

But Corbin Mark also recognizes that he and his colleagues will have to maintain their vigilance. "You've got this blueprint out here [in PlaNYC 2030] and either some of these initiatives die on the vine, or they get implemented from a very top down kind of approach," he said. "We don't want put in all this thinking and labor and effort to make this blueprint, and then have the plan not come to our communities."

Melissa Checker is assistant professor of urban studies at Queens College, City University of New York. She is the author of Polluted Promises: Environmental Racism and the Search for Justice in a Southern Town,