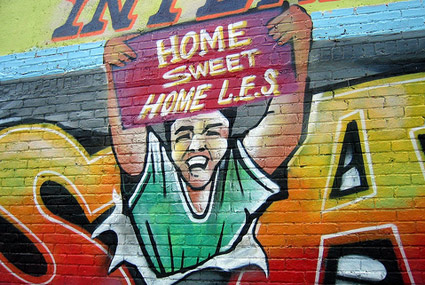 New York City's most "endangered neighborhood" was rezoned by the City Council today in an attempt to stave off gentrification and boost affordable housing.

The rezoning of the Lower East Side, a neighborhood of tenements turned trendy boutiques and hipster havens, will limit building height and spur development of affordable housing. The City Council approved the rezoning by a vote of 42 to 0.

In addition to the rezoning of the Lower East Side, the council also approved legislation clarifying regulations for broken parking meters and a bill that requires the police department to file quarterly reports on firearm trafficking.

The Lower East Side has been the longtime New York magnet for large immigrant populations, from German to Chinese, packed with infamous overcrowded tenements.

Now a Mecca of counterculture, the neighborhood has been largely taken over by developers and boutiques. Out-of-scale buildings along its main corridors, including East Houston, sparked a community-based drive to limit certain types of development, starting seven years ago, said Councilmember Rosie Mendez, who represents most of the area.

"This is something the community conceived of," said Mendez. "This will ensure that our community remains a low-scale community."

As a result, 111 blocks of the neighborhood were rezoned, allowing for larger scale development along the area's wide streets, such as East Houston and Delancey, and smaller development on its residential corridors. All building heights will be limited to 80 feet, said officials. The area stretches from East 13th Street to Grand Street and from Avenue D to East of the Bowery.

Until this week, support for the plan within the council and among the members that represent the district, was shaky. According to an agreement between the administration and Councilmembers Mendez and Alan Gerson, dated today, the new zoning could provide more than 456 new affordable apartments -- thought to be the linchpin for gainig council support.

The actual construction of those homes, though, depends on whether a developer would take a height or density bonus, which would allow a building to be larger, in exchange for providing affordable housing.

The city's Department of Housing Preservation and Development has promised another 105 affordable units in the area.

The city will also work with the council members and the Lower Manhattan Development Corp. to allocate approximately $10 million toward the creation of new affordable housing in the area.

Outside of the Lower East Side, residents, particularly of Chinatown, have expressed concern over developer harassment, fearing gentrification could spill over into adjacent neighborhoods with less strict zoning requirements. The administration and the council members agreed to allocate $100,000 to groups that work on anti-eviction and harassment issues in the area.

Gerson also said the administration agreed to "fast-track" rezonings in adjacent neighborhoods to preserve their character as well.

Not everyone agrees that these measures will protect the community.

"What is this separate Chinatown plan really mean?" asked Josephine Lee, coordinator of the Coalition to Protect Chinatown and the Lower East Side, which opposed the rezoning. "There is not going to be any community left to fight for when they do this Chinatown plan."

Lee said the coalition plans to file a lawsuit against the city charging the rezoning is discriminatory.

Ever park at a broken meter and think you're getting free parking?

Technically, anyone who parks at a malfunctioning meter can only do so for one hour no matter how many hours an adjacent working meter may allow you to stay. No one, though, knows about the rule, says the council.

The legislation, which was approved by a vote of 42 to 0, will allow drivers to park at broken meters for the maximum allotted time in that immediate parking zone.

The council also approved legislation (Intro 492-A) by a vote of 42 to 0 requiring the police department report how many arrests, per precinct, are from possession of firearms or trafficking of firearms.

Any New York City business that receives tax abatements should be on their best behavior.

A bill (Intro 860), passed the City Council by a vote of 42 to 0, revises the tax abatement program to penalize certain companies with a history of violations with the city. If someone who receives a tax break has violations, such as asbestos or environmental hazards, and does not correct them within 180 days, their benefits would be suspended.