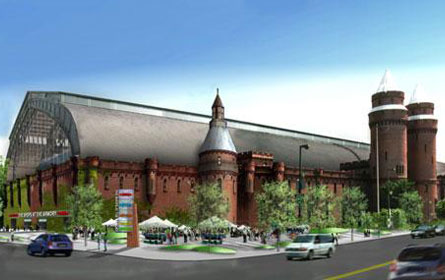 This month the City Council will be the scene of a showdown in a long-brewing battle between one of the city's biggest developers on one side and a tight coalition of labor and community groups on the other. The issue at the center of the battle is living wages â€“ setting a minimum of $10 per hour for full-time employees at the project site. The outcome could set a precedent for future development deals.

Beyond that and the fate of a Bronx community, the dispute also calls into question the issue of agreements negotiated between community groups and developers and the city's entire land use review process. Is this really a path-breaking effort to require living wages at all public projects, as labor representatives claim? Or is it the familiar last act of a scripted dance around the city's Uniform Land Use Review Procedure in which developers sign on to non-binding concessions to win City Council approval of the deal at hand.

From Armory to Mall

The project this time involves the Kingsbridge Armory, the biggest armory in the nation. On Oct. 19, the City Planning Commission approved a deal giving the Related Companies, one of the city's largest developers, control of the now-vacant armory. Related plans to convert it to a shopping mall.

Related is buying the city's property, appraised at $20 million, for a quarter that amount. The city also has promised a giant package of tax incentives.

In return, a coalition of labor and community groups, the Kingsbridge Area Community Alliance, or KARA, wants Related to sign a Community Benefits Agreement that commits businesses in the mall to pay at least $10 per hour plus benefits and hire local residents. The agreement would exclude a supermarket that could kill local stores. The alliance also wants Related to provide discounted community space and a public plaza at the armory site.

Related has said it could agree to most of this, and the company has claimed it only hires union labor for construction. But Related has stopped short of agreeing to a living wage for all employees at mall businesses.

Although such Community Benefits Agreements may not be enforceable, their use has been growing as government, which is not a party to them, looks the other way. Projects at Bronx Terminal Market and Willets Point went to the City Council with community and labor groups threatening to stop them. They passed after last-minute concessions spelled out in the separate agreements. The City Council has rarely turned back a land use proposal supported by the mayor.

In the first action in the land use process for the Kingsbridge project, Community Board 7 approved the project. The board placed several conditions on its approval, but the City Council could approve the project without adopting any of them. Despite that, Related has signaled it will agree to some of the conditions, including establishment of an ongoing community advisory group, free wi-fi in the mall and a World Peace Atrium, and has said it is open to establishing a youth recreational facility as proposed by the community board.

The community board supports a supermarket in the mall. A local grocery store group that employs 400 unionized workers opposes the market.

Then, Bronx Borough President Ruben Diaz Jr. came out against the project. He complained that Related has not responded seriously to his concerns about traffic issues and the impact the mall would have on local businesses. This suggests that, with some concessions by Related, the borough president might not oppose a final deal.

In any case, the deal can go through without him. Even though representatives of three other borough presidents and the public advocate voted against the project at the City Planning Commission, the majority of mayoral appointees guaranteed support for the project. And if the community board, City Planning Commission and City Council approve the mall, the borough president's vote would not matter. The council member representing the Bronx district where the armory is located, Maria Baez, is a lame duck noted for her extensive absences. Since the full council usually defers to the members in whose district projects are located, there is likely to be a leadership vacuum.

If past agreements can serve as a guide, a community benefits agreement could help win City Council approval even though Community Benefit Agreements are not formally part of the land use review process and could prove difficult, if not impossible, to enforce. Those who question the agreements say they tend to reduce the importance of official public forums and favor back-room deals involving developers, government officials and selected community representatives.

City government has long maintained that such agreements are of dubious legality and can undermine the decision-making process set out in the city's charter. But the Bloomberg administration has turned a blind eye to these side agreements when they give an extra boost to unpopular projects like Yankee Stadium. And many community organizations see them as useful tools for extracting concessions from developers.

The agreements also raise the issue of who really represents the community. This has emerged as a key issue in the Kingsbridge saga where a critical question is whether, by focusing on the living wage as the make-or-break issue, labor has put its interests ahead of those of community based groups. Union involvement also highlights the chasm between organized construction workers and the service workers who will work in the mall and make less than half the average construction wage.

Out in front on the living wage issue is the Retail, Wholesale and Department Store Union, backed by a broad array of union locals and the construction trades as well as the AFL-CIO. According to Desiree Pilgrim-Hunter, a community activist with KARA, the living wage also is a community issue "because we live in the poorest urban county in the nation and we need good jobs with living wages."

But Crain's recently reported that the Building and Construction Trades Council of Greater New York "supports the development of the Kingsbridge Armory and all necessary approvals for this project by the New York City Council," without insisting that living wages be guaranteed for service workers. This raises a question about whether labor is really united on the issue.

Fred Lemoine, vice president of the building trades in the Bronx, said the construction unions simply wanted to clarify the position taken by the Central Labor Council supporting KARA and the agreement but "stopping short of drawing a line in the sand." With construction jobs way down in the current economy, these locals are sending a clear message that they support the plans for the mall. Project supporters will surely see this as a split in labor that can only help them at the City Council.

Even if labor got everything it has asked for, would it truly be getting a living wage? It is demanding only $10 an hour. While slightly higher than the minimum wage, this would put the average full-time salary just under the Bronx's already low average per capita income. While labor has demanded the promised jobs be full-time with benefits (in which case they pay go up to $11.50 per hour), those crucial details could get lopped off the list as the finale approaches.

Despite community support for labor, labor's demands seem to have eclipsed the concerns of community groups. The first community meetings about the armory in 2003 ended with a consensus that the priority in redevelopment should be additional schools, since classes in the district suffer from severe overcrowding, and other community facilities. After an initial promise to build schools on the site, the Department of Education backed out.

Instead, the city's Economic Development Corp. issued a request for proposals that favored market-based development and eventually accepted Related's bid. Six members of KARA took part in shaping the Request for Proposals, which could make it difficult for the group to mount any strong opposition now.

In the end, by reducing the land use issue to one of economic development, Related and its City Hall backers may have deflected discussion away from the more far-reaching issues of long-term sustainability. The armory project is the latest of several giant suburban-style malls that are getting dropped into the city's dense fabric without the roads and infrastructure that the suburbs enjoy. The onslaught of well-capitalized national chains moving into subsidized space threatens the very survival of existing small and medium-sized businesses in the area.

These developments also encourage greater dependency on auto use. The new mall would include 400 paid parking spaces, and the borough president and some community groups, instead of prioritizing better transit, are fighting for the lots to be free, which would spur even greater auto use.

Neither the land use process nor the debate over the community benefits process dealt with these vital issues of long-term sustainability. They, along with other planning issues, escaped scrutiny at the City Planning Commission, where they should have been the prime focus. In sum, the big loser in the whole dispute over the Kingsbridge Armory may be the land use review process itself.

The City Council is expected to vote in November and take a bow for putting on a good show in the final act of this familiar ballet that usually surrounds big development deals.

Tom Angotti is professor of urban affairs and planning at Hunter College, City University of NY, editor of Progressive Planning Magazine, and a member of the Task Force on Community-based Planning.