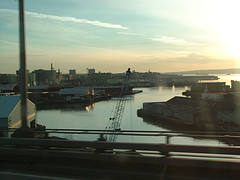 The Gowanus Canal in south Brooklyn at the center of a formerly active industrial area once bustled with ocean-going ships. Today, it bustles with real estate investors who are pressing to convert industrial properties to condos and reinvent the canal as a miniature Venice.

One developer, Leviev Boymelgreen, plans to create a "Gowanus Village," and Bayside Fuel wants to build two 10 to 12 story towers along the canal. The city Department of Housing Preservation and Development is moving ahead with plans for housing on the eight-acre Public Place site, once the former owner cleans up the contaminated property. Last year the Department of City Planning completed a land use study of the area and is working on a rezoning plan that is likely to meet some of the expectations of developers for this district so close to the booming neighborhoods of Park Slope and Carroll Gardens.

Many residents and experts question whether any of this is sustainable and takes into account serious environmental and public health concerns. Will the rush to develop make the area worse in the long run? Will the real estate bubble burst before the gondolier's dreams can be realized? Will rising sea levels due to global warming put the new Venice under water? Will the piecemeal remediation of toxic sites obscure the long-term threats to the human and natural environment? And will the thunderous roar and pollution from the Brooklyn Queens Expressway, the behemoth that looms over the Gowanus inlet, increase as more residents bring more cars so they can get to the area's new superstores like Lowe's, Ikea and Whole Foods? 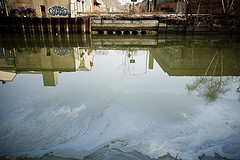 The Gowanus Canal is one of the city's most polluted waterways. For over a century ships and industries dumped their untreated wastes in the canal. Sediment that has built up over the years at the bottom of the canal is known to be highly contaminated. There is no clear plan to dredge and dispose of the waste. Any plan to accomplish this would face serious regulatory and cost constraints.

The canal is also an outlet for massive combined sewer overflows. These are discharges combining stormwater and domestic sewage that occur during rainstorms because the city's wastewater treatment plants cannot retain and treat large volumes of waste.

To improve the performance of the flushing tunnel, which helps clean out the canal, the city Department of Environmental Protection and state Department of Environmental Conservation have proposed a $350 million project to reduce the sewage overflows by 34 percent and skim off 78 percent of the floatable solids. While a walk along the canal in the summer can make you dizzy, city officials expect their efforts to result in "a substantial reduction in odors." Water quality in the canal would meet the standard for the survival of fish, though it will still be a long way from the pristine inlet it was when Indians fetched foot-long oysters from its waters.

At a recent public meeting with the city's water experts many Gowanus residents did not exactly break out the sparkling to celebrate. Some remembered that when the flushing tunnel, which first opened in 1911, failed in 1961, it took the city almost 40 years to repair it. Over the years, the city has taken major action on water pollution -- building sewage treatment plants, stopping ocean dumping and addressing sewage overflows - only when the courts have forced it to. Thus it would be risky to wager on how long it will actually take to complete the work on the flushing tunnel or the expansion of the Red Hook sewage treatment plant, which will be needed to deal with all the new growth in the watershed (and forecast in PlaNYC2030). While the flushing tunnel project would address the problems at the surface of the canal, it will fail to reach the deeper ones. The water and earth below the surface throughout the area is contaminated. There is still no specific plan or budget to deal with the toxic sediment. Instead, development and remediation are proceeding one site at a time, only surface soil is being replaced, and many sites, like the recent Lowe's megastore, are mostly paved over. Park Slope Neighbors and FROGG-Friends and Residents of Greater Gowanus) have complained that the Whole Foods store now under construction, which includes some elements of green architecture, will make stormwater runoff worse because the company refuses to build a green roof. Its hundreds of parsing space could increase traffic and air quality problems.

Neither the city, state nor federal government is studying the long-term effects of this kind of development. Residents of the Public Place site and other housing in the area could face serious health risks from the surrounding environment. Even if the individual site is cleaned up, residents could remain exposed to health risks from properties that are not remediated as contaminants migrate.

There is no systematic monitoring of environmental and health risks in the area. The environmental impact statements for the proposed projects are unlikely to address these risks in any serious way because adequate data do not exist. It is a recipe for chronic illnesses like cancer that develop over long periods of time.

And there is little to no discussion about the long-term effect of the BQE traffic. Typically, mitigation measures proposed in the environmental impact statements for new projects call for air conditioners and double-paned windows to deal with noise and air pollution, offering the ominous prospect of a residential population that must stay indoors in order to stay healthy.

Amid the rush to real estate deals, there are some cautionary voices. For the last several years a team of faculty and students from Columbia University's Graduate School of Architecture, Planning & Preservation have been studying the Gowanus and talking to community groups and city officials. In the book Eco-Gowanus: Urban Remediation by Design, edited by Richard Plunz and Patricia Culligan, the researchers propose using what is called restoration ecology to promote a restoration economy. This would entail creating new industries and institutions on the canal that specialize in environmental cleanup, stewardship and green industry. They question the prevailing "cap and pave" approach that hides long-term environmental and health problems and argue against creating a new residential "monoculture."

Given that the critical issues for the Gowanus are so big and have to be addressed over a long period of time, people may look to the city's planners for answers. But the city's long-term sustainability plan, PlaNYC2030, is quite broad and does not offer any solutions beyond the city-wide goals of improving sewage overflow, cleaning up brownfields and creating new housing throughout the city.

The City Planning Department's rezoning probably will offer a new regulatory regime without a long-term plan. It is likely to allow for residential development on one side of the canal, preservation of industry on the other (though the nearby residential growth will put more pressure on industrial renters and set the stage for an eventual rezoning to residential) and a mixed-use zone that will effectively open the door wide for conversion of industrial properties to housing.

The net effect in the long term is likely to be the residential monoculture that the Columbia researchers warn against. But City Planning could break precedent and go beyond zoning to deal with the complex planning issues in a way that is sustainable in the long run. Over two decades ago, the department did a detailed land use and business survey of the Gowanus that found a resilient industrial community and proposed measures to protect it. At a recent meeting of Brooklyn Community Board 6, the director of the Brooklyn City Planning office, Purnima Kapur, said of the current zoning study, "It will not be an easy or short process."

Friends and Residents of Greater Gowanus