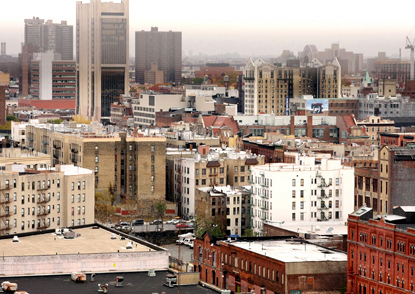 Despite all the turmoil in Albany in the past few weeks, housing advocates remain optimistic about their chances for success in the state capital. The news from Washington was far grimmer. There, a sudden and massive cut in funds for the federal Section 8 rent subsidy program could drastically affect the city's housing situation.

At a town hall meeting in Harlem to discuss housing issues, the topics on the agenda included the loss of Mitchell-Lama apartments to market rate housing and the expansion of Columbia University into Manhattanville, hot topics that have led many to despair. But the mood was buoyed by the realization that a Harlemite had become New York's governor.

"We can be cautiously optimistic," Nellie Bailey of the Harlem Tenants Council told the audience. "Governor Paterson will be better than Elliott Spitzer on our issues."

It's a refrain that many housing advocates have been repeating as the shock of former Gov. Eliot Spitzer's political demise subsides.

"Certainly from our point of view [Paterson] will be much, much better," said Michael McKee of Tenants PAC. "He's fundamentally pro-tenant whereas Spitzer wasn't. Spitzer was certainly better than (former Gov. George) Pataki, but I'm not sure how much Spitzer really believes in regulation of housing, for example."

Paterson has a commitment to tenant issues, McKee added, a comment other advocates echoed.

"Governor Paterson will be very good for tenants," said Jenny Laurie of the Metropolitan Council on Housing. "He's always supported tenant issues and he's very knowledgeable. And he's got all of the different types of housing in his district -- rent regulated apartments, Section 8 and Mitchell-Lama projects and New York City Housing Authority buildings."

On at least one major issue, the expansion of Columbia University into West Harlem, Paterson's views are encouraging to housing advocates, most of whom oppose the plan in its current form. In 2005, Paterson called on then-Governor Pataki to issues a six-month moratorium on the use of eminent domain to take private property for the university's use. But as the leader of the minority in the State Senate, Paterson did not have the power to get much done.

Just a month ago, Paterson headlined a fundraiser for McKee's group at a bowling alley in Harlem. "David's a friend," McKee said, adding, "I know from talking to him over the years that he is pro-tenant and pro-rent regulation.... I think he understands what ordinary people go through just to make a go of it."

Another advocate who asked to remain anonymous lest a comment affect political relationships said Paterson could prove a disappointment.

"In the past, he's been an over-committer," the advocate said.

The ascension of Paterson to the top spot in state government does not change the fact that the State Senate, if it remains under Republican Joe Bruno's leadership, still has the power to block progressive policy on housing issues, McKee said. So, Election Day remains the key date for housing advocates, he said.

"Everything is dependent on the senate changing in November," he said. "If Bruno holds on by one vote, we won't be able to change anything."

November also could be key to what happens in Washington. The Bush administration cut $2.4 billion from the federal Section 8 rent subsidy program in March, which effectively threatens 90,000 households in the city that rely on the subsidy to help pay their rents. The cut means that the Section 8 program can only meet its commitment to landlords through September 2008 -- as many as 500,000 Section 8 vouchers nationally would have to be cut to make up the shortfall.

The problem of funding has existed at least since last year when some Section 8 landlords did not receive payments owed them. At its root is a change in how the vouchers are funded. Contracts for low-income housing used to last for 20 to 30 years. In the 1990s, though, the Department of Housing and Urban Development began to switch to shorter term -- one to five year -- agreements. With funding tight and Congress cutting back, the department dipped into funds to cover shortfalls, leaving it without money to pay its obligations toward the end of the year, John Cox, the department's chief financial officer http://www.hud.gov/offices/cir/test071017.cfm told Congress last year.

This leaves landlords caught in the middle. When developers accepted tax breaks and other incentives to build affordable housing decades ago, they did so with the understanding that after 20 or 40 years they could opt out of the program. "It's another incentive to get out" of the Section 8 program," and so could s speed the loss of affordable Section 8 project apartments, said Patrick Coleman of Tenants & Neighbors. "Almost 10,000 families are living in buildings and now in danger of their owners saying 'forget it.'"

HUD thinks the problem can be solved, said spokesman Brian Sullivan. He conceded there had been a basis for concern. "There are people who are understandably nervous because you have landlords who, if they don't get paid, they don't want to play. In certain extreme situations, there were some suggestions that landlords would evict tenants because they weren't getting paid," Sullivan said. He added that he did not think anyone had been evicted because of the funding situation. Sullivan said the department believes the situation has been remedied. "We are confident that we have sufficient funding to meet our obligations in FY 2008 and we are seeking sufficient funding in 2009," he said.

Not everyone is so sure, though. On a rainy March night in Greenwich Village, about 150 people filled a church as three members of Congress from the city -- Yvette Clarke, Jerry Nadler and Nydia Velasquez -- decried the cuts. They signed a pledge to work to restore the funding.

Sullivan questioned the rally. "We believe [the funding shortfall problem] has been corrected and we don't think scare tactics are necessary (referring to the rally," he said.

Joe Lamport is the assistant director of the City-Wide Task Force on Housing Court, a coalition of community housing organizations. Â