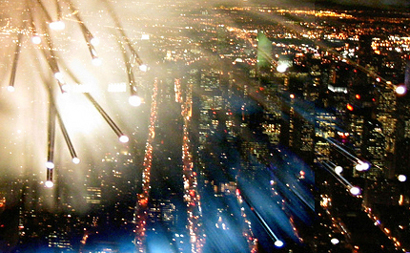 Images from Adrienne Serra and timetrax23 via (cc).
Negotiations continue on a plan to create a city-wide, high-speed fiber optic network.

On April 15, after months of negotiations, Verizon announced it would file an application with the city's Department of Information Technology and Telecommunications to offer video service throughout the city. If that application is approved, it will be the company's cue to ramp up its installation of fiber optic cables to every home in New York and start offering its FiOS package of Internet, video, voice and even wireless for those customers who really love a one-stop-shop. Verizon says it could begin offering the video service by the end of the year.

I'm not trying to hype the service - Verizon's television advertising campaign can take care of that. But the widespread adoption of DSL and cable changed the Internet radically, making photo galleries and short videos commonplace; the next generation of connection speeds will likely yield a similar transformation. An uncompressed feature film will download in a half an hour over a fiber optic connection compared to almost 10 hours on DSL and practically never on dial-up.

Replacing the paired copper wires that make up the telephone network with new fiber optic wires is an expensive proposition. Verizon won't discuss the specific dollar figures involved for New York, but in the 16 states where it is rolling out FiOS, Verizon plans to spend nearly $23 billion between 2004 and 2010. The New York installation alone would run into the billions and extend past that timeline. An investment of this magnitude will be the most significant thing to happen to New York's telecommunications infrastructure since the initial installation of cable television.

"This is a market-changing deal," said Councilmember Gale Brewer, referring both to its financial size and to the impact of running fiber optic cables to every residence in the city.

As Juan Gonzalez reported in the Daily News last fall, the Bloomberg administration and Verizon have been conducting secret negotiations for months. Although the application must still clear a number of hurdles, Verizon's announcement seems to indicate that it and the city have made some progress in the talks.

Based on the statements by members of the City Council and the public interest community, there have been a number of key issues.

The first is buildout. If you live in the outer boroughs or a poor neighborhood, you want Verizon to offer service to the entire city as quickly as possible, say five years, rather than offering service just to wealthy neighborhoods. In its statement, Verizon said it would build the fiber optic network througout the entire city by 2014. The smattering of buildings that already have FiOS service are dispersed throughout all the boroughs, determined by their proximity to a Verizon connection point and the willingness of the building owner, according to Verizon. The company points to this as evidence that it would not discriminate against poor neighborhoods even over a longer timeline.

New York's architecture had posed a particular challenge. Fiber optic wires are made of glass or plastic and transmit light, so it was difficult to run them through the tight corners of old apartment buildings. But last year, Corning, the upstate New York glass company, invented a bendable fiber. Verizon is already using Corning's technology to bring fiber optic service to the 11,232 apartments in Stuyvesant Town and Peter Cooper Village.

Another issue centered arund whether Verizon would commit to funding centers like Manhattan Neighborhood Network and Brooklyn Community Access Television where people can go to use expensive television production equipment and broadcast their programming. Existing cable providers already do this. But the Internet is different. People can upload video content from their homes. Training and equipment access can happen at the neighborhood level. Verizon representatives visited the public access centers recently, andthe company probably is willing to match the incumbents' support in that realm, but might balk at going further. Is statement did not address this.

"Public access and citywide buildout are a given," Brewer said, "but Verizon also needs to support the social layer." That means all of the things in addition to access that people need to use the Internet, especially computers, training and relevant content. There are many groups in the city like Per Scholas in the Bronx and Computers For Youth that provide these kinds of services. Since the Bush administration cut community technology funding in his first term, these programs have relied almost exclusively on foundation support.

Faster than Your Average Internet

These speed differentials represent a new kind of digital divide. The gulf between the online experiences of a person connecting at 20 mbps over a fiber optic connection and a person connecting at a fraction of that over copper wires is as dramatic as between the latter and someone who has no in-home connection at all. It's like going from standing to walking to driving.

"I really think it does give people access to a whole other Internet," Ellen Yu, a spokesperson for Verizon, said.

But Not Fast Enough

While New York inches towards connections of 20 to 50 mbps, foreign cities like Hong Kong and Amsterdam are moving to 100 mbps. The challenge for New York City, then, is threefold. At the same time it works to cross the traditional online/offline divide, it needs to both close the gap between those with marginal access and those with speedy and convenient access and catch up to other world-class cities.

Some cities, like Seattle and San Francisco, have considered municipally backed fiber networks to solve this problem and bring internationally competitive Internet service speeds to their residents, but the cost and timeframe can be daunting. Entrepreneur Brewster Kahle recently paid to wire a San Francisco public housing complex directly into the local backbone, giving residents access at up to 1 gigabit, or 1000 mbps. Smaller cities like Burlington, Vermont, have built such networks and are providing the "triple play" of services - voice, video, and Internet - themselves and at lower prices than the incumbent cable company. From the looks of it, New York public officials are going to rely on the private sector, especially Verizon, to bring us the next generation of broadband.

Currently, the fiber optic service in Stuy Town and other select buildings around town carries just phone and Internet. It has the potential to provide video as well but is not currently doing so.

This is more a political issue than a technical one. The government regulates Internet service, phone service and television service differently - even though they can travel over the same wires. So Verizon can replace its copper wires with fiber optic lines and start selling Internet access over those lines, but it cannot sell TV service until it gets a franchise from the city.

The government also regulates the different wires differently, so Verizon is required to lease its copper wires to competitors, but that requirement does not apply to the new fiber optic lines. In some cases, the company has removed the old copper wires when they install FiOS, meaning you - or subsequent residents - can't go back to the cheaper DSL service once you upgrade. In general, though, Yu says Verizon's current practice in New York is to leave the copper in place unless the customer requests removal. Either way, the potential revenue from the video service is the primary motivation for Verizon to install FiOS throughout the entire city.

The entry of Verizon into the market would dramatically change the television system in New York. Currently, even though there are multiple cable operators in the city, a household only has one choice for cable TV because each franchise covers a specific area. Where customers have a choice of cable operators, subscribers usually see price reductions of 15 percent, according to Chuck Bell of Consumers Union.

If Verizon got a franchise to sell television service over its fiber optic network, that would provide New Yorkers with another choice -- along with cable and satellite -- for TV. The cable companies would probably cut rates to compete, though perhaps only in the neighborhoods where FiOS is available.

Meanwhile, these cable provider's ostensible monopolies have led to growing customer dissatisfaction. Time Warner and Cablevision are currently negotiating renewals of their 10-year franchises, so Consumers Union and New York Public Interest Research Group worked with Comptroller Bill Thompson to draft a "Cable Consumers Bill of Rights," which they announced on March 26. Among other things, it would seek to make the companies more accountable on service issues, provide more information about customer bills and charges, protect customers' privacy and give New Yorkers greater access to independently owned channels.

The comptroller is a member of the Franchise Concession and Review Committee, which also includes mayoral appointees and relevant borough presidents. The franchise committee would have to approve any deal involving television services reached between Verizon and the Department of Information Technology and Telecommunications. The deal would then need an OK from the state Public Service Commission.

Consumers Union's Bell urges vigilance: "So many issues are on the table during negotiations, there's always a chance that things will get dropped. We also have to think carefully how this changes over the life of the franchise. Technologies change. People's needs change." Most people didn't even have dial-up when the current franchises were first inked.

If you want to voice your opinion on the Verizon deal, the franchise committee is required to hold a public hearing on the franchise for television services, so stay tuned for that announcement.