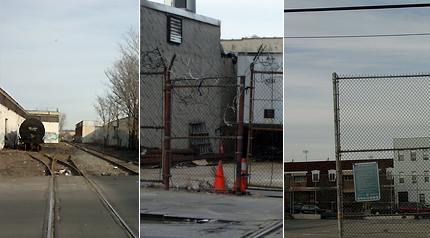 Some of New York's least friendly spaces -- its brownfields -- hold the key to achieving many of PlaNYC's goals for a greener, greater New York. To create more livable and sustainable communities for today's residents while accommodating one million new ones, the city must reclaim and redevelop many of its 7,600 acres of abandoned, under-utilized and sometimes contaminated industrial land.

PlaNYC offers a framework for reusing thousands of brownfields to provide affordable housing, generate jobs and offer usable open space. Redeveloping these lands would also promote the plan's goals of protecting wetlands, improving public health and cleaning up toxic waste. PlaNYC calls for state legislative action, and it also includes several important initiatives the city can implement without any approvals from Albany.

The city has taken some steps to advance the cleanup and re-use of brownfields, but there is much more the Bloomberg administration can do.

Another half dozen city communities are poised to take advantage of new Brownfield Opportunity Area funds that the state is making available this spring. These funds are being used to conduct environmental and economic studies, and to identify strategic sites and redevelopment uses that meet community needs, such as affordable housing.

The $4.5 million in state funds supporting these 17 community-based brownfield initiatives need a parallel commitment of city resources to ensure coordination of land use, planning and site specific actions. There is also a tremendous need for improved communications, training and technical assistance both for city agency staff and the communities involved in brownfield planning.

PlaNYC calls for the creation of a central city Office of Environmental Remediation to coordinate all the city's brownfield activities. Bloomberg budgeted $1 million for this office in 2008 and his fiscal plan includes $2 million annually in future years, but the office has not yet been created.

The city hired four new people with hazardous materials technical capacity at the Department of Environmental Protection, but no new personnel have been brought on board to conduct outreach, training and technical assistance. City Council legislation to make the Office of Environmental Remediation a permanent part of city government would help insure that this important function continues after Bloomberg leaves office.

The mayor scored another partial victory in January when Spitzer proposed creating a 10 percent brownfield tax credit bonus for projects built according to a Brownfield Opportunity Area plan. That same bill would free up the state Department of Environmental Conservation to start accepting historic fill sites into the Brownfield Cleanup Program. (Historic fill is material brought into a site to raise the elevation of low lying areas to permit development and typically is used along New York City's waterfront.)

Because the filling occurred prior to any regulation, these materials contained contaminants, including metals and petroleum. To date, most city fill sites have been rejected from the state's cleanup program. Albany lawmakers, occupied with the budget, have not yet considered these thoughtful reforms.

PlaNYC provides $15 million for a remediation fund that would provide low-interest loans for testing and remediation and $10 million for environmental insurance. Both initiatives are desperately needed, particularly to advance affordable housing and other projects struggling to cover the additional costs involved in building on brownfields.

Unfortunately, the city's efforts to develop a remediation fund haven't moved, and this is at least partly due to the delay in establishing the Office of Environmental Remediation. The city should use a portion of the $15 million slated to finance brownfields for the Metro Brownfields Program, an innovative public-private brownfield remediation financing program whose progress has been stymied by the restrictions placed on the federal grant made available to credit enhance remediation loans. (Note: New Partners for Community Revitalization is a partner in the Metro Brownfields Program.)

The city's environmental insurance initiative calls for the creation of a policy that protects property owners before they test their site. This has not moved forward and whether there is a need for such insurance is unclear. There is, however, a need for environmental insurance policies that would protect against cost overruns associated with planned cleanups and provide liability protection. Policies that address cost overruns are difficult to secure on cleanups of less than $5 million, and the premiums are very high. If PlaNYC funds were used as a buffer â€“ essentially to cover the first narrow layer of remediation cost overruns before the insurance coverage kicks in -- it would reduce the premium costs for the developer and increase the availability of policies. Separately, PlaNYC resources could be used to subsidize premiums, particularly on projects with narrow profit margins such as affordable housing.

Give the City Regulatory Authority

City Hall has said its top brownfield priority is to get authority from Albany for its own cleanup program. The fact that the Department of Environmental Conservation has practically shut down the state's Brownfield Cleanup Program in the aftermath of recent lawsuits makes the need for city autonomy that much more urgent. A bill in the State Senate would give the city this authority, but the Assembly has not introduced a companion bill, nor has the Paterson administration shown any interest in handing over authority to the city.

And, with a moratorium on new Brownfield Cleanup Program applications lasting through early July, it is unlikely that Albany leaders will consider such a change before the legislative session ends this summer.

Instead of waiting for the state, the city should advance those PlaNYC initiatives that do not rely on state action. The $4.5 million in Brownfield Opportunity Area funds that are advancing 2,000 brownfield sites in 17 communities should set the pace for accelerating achievement of the PlaNYC brownfield goals. However, continued progress is dependent on City Hall establishing the Office of Environmental Remediation and delivering the communications, technical assistance, training, financing and insurance assistance these communities need. The good news is that none of that depends on Albany.