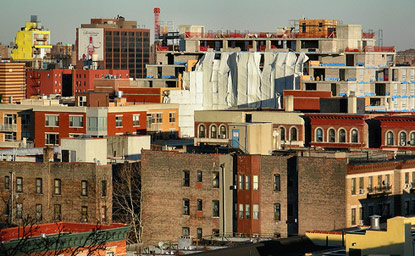 After five years of reporting and writing about housing issues, I decided to take a break. I have taken a new post in Ghana, West Africa, a region of the world I am familiar with from my days as a Peace Corps volunteer. Within a week of moving, I learned enough to know that housing issues are a hot topic here, too. I already heard one story about an eviction, and a Ghanaian told me that Accra, the capital city where I now live, has something akin to rent regulation. And grousing about landlords appears to be universal.

But back to New York, where housing issues have their own distinct flavor -- an increasingly bitter one for more and more people. As a friend told me recently, the city's "housing problems are not going anywhere soon. In fact, they'll probably get worse."

She was referring to a variety of indicators: Homelessness is as bad as ever. Virtually every type of affordable housing, from rent regulated apartments to middle income Mitchell-Lama apartments to public housing, is either disappearing or under severe stress. New Yorkers spend more of their incomes on rent than before. And the city's housing market, which had seemed impervious to the sub-prime crisis that is hitting many areas of the country hard, is showing signs of slowing down.

The housing "beast" is sick and getting sicker. Barring any interventions, low and moderate-income New Yorkers will suffer the most, but it looks like a lot of people are suffering and more will join them.

The challenges call for changes in the city, state and federal government's approach to housing, advocates argue. They have had success at the city level in recent months -- in April the City Council passed new laws that make it illegal to harass tenants and to refuse to rent to people because of their source of income.

Now, they are looking to the state for change, which had come, in modest doses, from former Gov. Eliot Spitzer. If the Democrats win control of the State Senate in November, much more could be done, advocates believe.

Many would hope to start with the Rent Guidelines Board, the nine-person panel composed of two landlord representatives, two tenant representatives and five public members, all appointed by the mayor. The board has set a range for increases this year, which could mean the biggest increases in rents in several years.

Such a move would hardly surprise advocates. Every year the board votes to increase rents, apparently deciding that the increase in the costs of operating buildings outweighs the economic difficulties faced by tenants. Just as the board's reports show that the costs of operating a building have increased, other studies show that rent burdens for New Yorkers have only increased.

But advocates are hardly giving up on the current board, said Kenny Schaeffer of the Met Council on Housing. "Some of the public members seem to understand that their job is not about rents," he said. "They see that it's about affordable housing."

Increases in the city's water and sewer rates and the costs of fuel are making many landlords anxious, said Mitch Posilkin of the Rent Stabilization Association, a trade group that represents the interests of over 25,000 landlords in the city.

"This particular round of rent guidelines increases is extraordinarily important," Posilkin said. "Smaller property owners are confronting the choice of paying their bills -- bills that cannot be deferred -- or maintaining their buildings."

Rent is just one measure of housing to look at, but it skews the conversation about housing toward the idea that it's all about money. It is not. Housing is fundamental, a human right. Let me pontificate briefly: Viewing it as a commodity cheapens its value terrifically. If we scratch at the surface of housing we see so many, more valuable issues: community stability; thriving families; physical, mental and spiritual health; and economic success.

Since I started writing about housing, one thing has been made clear to me: Unless and until elected representatives deal more seriously with the problems in housing, the city's housing problems will only intensify. The prospects that it will do that are unclear. Free market ideology is dominant -- hell, the city is going so far as to pay kids to go to school. Can politicians resist this and stand up to the market -- and its rich proponents in the real estate industry? New Yorkers might find out if the Democrats take control of the State Senate in November, but right now it's unlikely a party shift will bring about such a dramatic change in thinking.

Property owners, however, see the potential Democratic takeover as a threat, particularly if a newly Democratic Senate were to repeal the 1972 law, often referred to as the Urstadt Law, that effectively revoked the city's control over its housing laws.

"I think the recent actions by the City Council in passing the Section 8 legislation and the tenant harassment legislation are excellent indicators of how irresponsible the council would be if the city ever obtained jurisdiction over the rent regulation system as they seem to want to do," Posilkin said. "The council's stated intentions of seeing the Urstadt Law repealed are really frightening in light of the fact that the council does not seem to understand its role in developing proper and well-balanced legislation."

Advocates, though, see a major change in thinking as essential. "Without serious legislative changes, and with the population continuing to rise, the homeless population will increase and the fabric of the five boroughs will completely change," Rob Robinson, a housing organizer with Picture the Homeless, wrote in an email. "You'll be unable to live in NYC if you make under $100,000."

To be sure, there is a balance. Property owners' interests must be considered, but in many respects, the city and state have catered to the owners for well over a decade, recent changes notwithstanding.

Interesting times are ahead, to be sure, for housing. The problems are difficult and require serious attention. New Yorkers are not naĂŻve nor inexperienced when it comes to facing stiff challenges. So, despite the problems, the prospects that people will find adequate solutions are actually quite good.

I wouldn't know where to start if I began to thank people for making writing for the Gazette such a pleasure. You know who you are and your knowledge and insights on housing and on writing have made writing the column not only easy but quite pleasurable. I am eternally in your debt.

Joe Lamport was the former assistant director of the City-Wide Task Force on Housing Court, a coalition of community housing organizations.