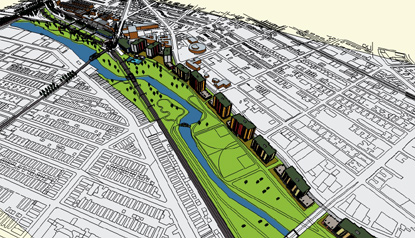 Image from Pratt Center for Community Development
North of Westchester Avenue, where the Sheridan now runs on grade, the Community Plan would create 1,200 new homes with retail and community space below. Open space would enable residents of Longwood and West Farms to easily reach the Bronx River and the new and redeveloped parkland of the Bronx River Greenway.

For 10 years, South Bronx residents have been fighting to get the state to tear down an old expressway so that a greener and more sustainable mixed-use neighborhood can take its place. The community's vision fits nicely with the goals of the city's long-term sustainability plan, PlaNYC2030. But will the city embrace this precocious community-based effort?

The Highway to Nowhere

South Bronx residents have fought for a decade to cast off the shadow of Robert Moses' Sheridan expressway -- a 1.25-mile, little-used stretch of highway locally known as "the highway to nowhere." In its place they aim to build more than 1,000 sustainable and affordable apartments, greenways, parks, resident services and progressive businesses that will offer living-wage, long-term jobs to Bronx residents in the city's burgeoning "green industry" to Bronx residents.

One of Moses' few projects that never reached full fruition, the Sheridan Expressway carries an average of 37,000 cars a day (to compare, on any given day, approximately five times as many cars traverse the nearby Cross Bronx Expressway). Construction on the Sheridan began in 1958, and Moses named the road for his good friend, the Bronx commissioner of public works, Arthur V. Sheridan, who died in a car accident in 1952. Determined to provide yet another option for drivers traveling between New York City and New England, Moses originally envisioned the Sheridan to continue four miles north from the Cross Bronx Expressway through the New York Botanical Gardens and the Bronx Zoo, to the New England Thruway. In one of the first of several defeats that eventually ended Moses' reign, advocates for the gardens and the zoo blocked his plan. This was good news for the city, but the South Bronx was left with the redundant stub of an expressway that connects the Cross Bronx to the Bruckner -- a purpose already served by parallel stretches of the Major Deegan Expressway and the Bronx River Parkways.

Stunted or not, South Bronx residents say that the road does its share of damage. Not only does it cut them off from access to the Bronx River, but the Sheridan also separates Bronx Community Districts 2, 3 and 9 from one another. Home mostly to African American and Latino families with significantly lower than average household incomes, these districts also suffer from some of the highest asthma rates in the entire state. The traffic that trickles down the Sheridan exacerbates those asthma rates by adding to area air pollution. In addition, runoff from the highway "contribut[es] to combined sewage overflows during heavy rains, making local waterways (including the Bronx River) unsafe for recreation," said Philip Silva, coordinator for the Southern Bronx River Watershed Alliance, the group that is spearheading the effort to reclaim the highway. 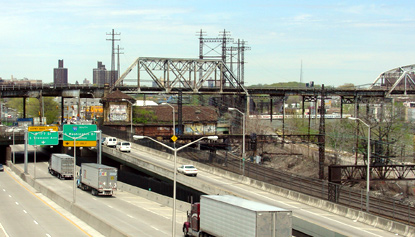 Silva underscored the degree to which the highway foils hard-won community efforts to green the Bronx. For example, the Sheridan runs directly along the emerging Bronx River Greenway, a 23-mile multi-use path along the river that will ultimately connect the Bronx and Westchester. Fifteen miles of this project already are in place, including one of the project's centerpieces, a lush, 2.7-acre park along the western shore of the Bronx River. But getting across the Sheridan to reach the park can be hazardous. Only three or four pedestrian bridges provide access to the greenway and the river. "As it stands now, young kids jump over the guardrails and run across the highway to get to the river," Silva said. "Once this world class park is finished, you'll have even more demand for quicker access to the river and a lot more incidents of people putting themselves in danger."

In 1998, the New York State Department of Transportation unveiled a proposal. to extend the Sheridan south onto Edgewater Road in Hunts Point. The plan calls for constructing a massive system of ramps next to the Bronx River and above one of the greenway's new parks in order to create a multilevel interchange between the Sheridan and the Bruckner Expressway.

Approximately 11,000 trucks a day currently travel through local streets on their way to and from the Hunt's Point Market. For years Hunt's Point residents have raised alarms about the health and safety hazards posed by the truck traffic. The state's proposal attempts to address one of the main sources of local asthma by connecting the Sheridan directly to the Hunt's Point Market and so diverting trucks from local streets. Despite that, community members claim that it is grossly inadequate in addressing their concerns. First, the plan mainly serves supply trucks arriving from the north; however, the bulk of trucks using the market are those of buyers who travel to and from the south -- those trucks would still have to use local streets. Second, the plan directs a steady current of trucks across the only pedestrian and bike route to one of the new greenway's parks. 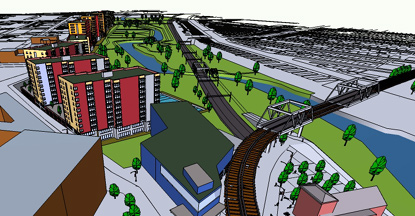 Image from Pratt Center for Community Development
Removing the Sheridan would allow development of a retail and community hub at the intersection of Whitlock and Westchester Avenues, linking the Number 6 train stop with the station designed by Cass Gilbert for the New York and New Haven Railroad.

Almost immediately upon hearing about the expansion plan, Bronx community leaders rallied and then formed the watershed alliance, a coalition of five local and two citywide organizations, to imagine the possibilities for a highway-less neighborhood. "From there it snowballed to thinking about taking down the highway entirely," Silva said.

At a series of workshops in 2006, local residents, formal and informal neighborhood leaders, and experts from the Pratt Institute and the Tri-state Transportation Campaign, generated a new plan. It accommodates a larger volume of traffic through a number of on/off ramps from the Bruckner Expressway that will "swoop right into the market" while circumventing Hunt's Point neighborhoods. At the workshops, community members also made clear their desire for affordable housing, park land and employment in sustainable industries, all of which they included in the final version of what the community plan. Silva said that the community proposal is feasible since the state already owns the land, thus saving millions of dollars in acquisition costs and making the project more appealing to investors.

The state is presently completing its Environmental Impact Statement, which will evaluate the relative merits of the original expansion plan, the community plan and staying with the status quo. Because the state ultimately decides the Sheridan's fate, the alliance has focused most of its lobbying efforts there and has not yet officially presented its plan to city officials.

At the same time, Silva emphasized that city endorsement could have a significant influence on the state. Accordingly the alliance is now working to bring city and state officials together to take a holistic look at the project and ensure that traffic engineers don't get to make what is actually a far-reaching land use decision for the city.

For Silva and his colleagues, PlaNYC2030's release comes at a perfect time. "Our plan is a great demonstration of PlaNYC's principles," he said "It uses the highway footprint to create density without displacement, it connects the surrounding communities and our proposed new housing to the Bronx River and the Greenway, and at the same time addresses the issue of truck access to the industrial areas of Hunts Point."

Indeed, it seems as though "the stars are aligned" for a long-awaited marriage between the community plan for the Sheridan and Bloomberg's plan. The question is whether the city will recognize the obvious and commit to making it happen. As Silva said, the alliance "has been promoting sustainable urban development for 10 years and we're glad [the city] has shown up to the party." Now New Yorkers wait to see whether city officials will put on their hats and eat some cake.

Melissa Checker is assistant professor of urban studies at Queens College, City University of New York. She is the author of Polluted Promises: Environmental Racism and the Search for Justice in a Southern Town,Â