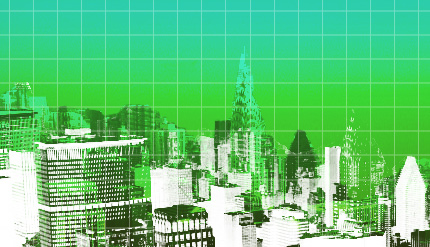 PlaNYC 2030 provides a kind of "greenprint" for the city.

More than a year has passed since Mayor Michael Bloomberg stood in the Hall of Ocean Life at the Museum of Natural History and announced his PlaNYC2030 for a green and growing city. The wide-ranging proposal immediately attracted much attention and general praise for taking a long-term look at the city and for offering specific ideas to reduce pollution, increase energy efficiency and expand New Yorkers' access to transit and parks.

Since then, the city has planted trees, opened new bike lanes, left schoolyards unlocked after 3p.m. -- and seen its congestion pricing plan fail. Given that mixed record, what does the future hold for PlaNYC -- for the rest of the Bloomberg administration and beyond.

Earlier this spring, Gotham Gazette launched Sustainability Watch with Hunter College's Center for Community Planning & Development. Last week the center's Tom Angotti, professor at the Department of Urban Affairs & Planning and Gotham Gazette’s land use columnist, sat down for an online chat about planning for the future -- and for sustainability.

Gotham Gazette: Congestion pricing aside, what do you think the successes and failures were in the first year of PlaNYC?

Tom Angotti: This is the city's first long-term sustainability plan and a rare adventure into the future.

It is really tempting to list presumed successes and failures, but to do that we would have to suspend any belief that this is a long-term plan that deals with fundamentally critical problems like air and water quality, transportation, energy and housing. There have certainly been some steps forward in every area, but then the question arises whether they have anything to do with the 2030 plan or what would have been made in any case. The real test is whether the ambitious goals of creating a greener and healthier New York will be achieved. That just defies quick fixes and short-term solutions.

Voila -- the real benefit of a long-term plan: It can't be just a platform for the next election or two.

Gotham Gazette: How damaging was the demise -- at least for now -- of congestion pricing to the mayor's overall plan?

Tom Angotti: The loss of congestion pricing was serious both because of the real value it would have had in reducing traffic in the city and because of the political momentum it could have created toward significant traffic reduction. Congestion pricing's benefits to Manhattan were real, but compared to the huge task of reducing traffic in the city, it was a very small step.

Missing from the start was a serious comprehensive plan to reduce traffic. If the city had started with a better plan to address real concerns throughout the city (and not just Manhattan) about traffic congestion, it might have had a better chance on congestion pricing. Maybe now there will be more political space to put forth such a plan.

Gotham Gazette: I'm wondering how much of PlaNYC incorporates building support statewide, not just within the city. In the case of congestion pricing, it seems the proposal lacked consideration from people outside of the mayor's coalition and from outside the city. How important do you think it is that PlaNYC reaches beyond New York City to secure its many goals?

Tom Angotti: Clearly an ability to work with Albany is key. But the other missing element is the region, including three states, hundreds of municipalities and thousands of independent authorities. It may be mind-boggling, but how can you reduce the city's carbon footprint when the city is a fraction of the region's population and land? How can the city reduce traffic when Jersey and Connecticut are widening freeways? What about the city's waste being burned in the incinerator on the Jersey side?

The task of even starting a regional discussion is daunting, but NYC is the most important player and the one most likely to kick it off.

Starting at the Top

Gotham Gazette: You have faulted the administration for not involving community groups and others in the drafting of PlaNYC. Is it too late for the mayor to reach out and involve community boards to ensure the survival of the plan? What could he do to improve the plans; chances of survival in the 18 months that Bloomberg has left?

Tom Angotti: Excellent question. I can't think of a better way to use the next 18 months than to launch 59 discussions, one in each community board, about long-term sustainability. They could and should go far beyond existing community board membership. Community boards can be the hosts of a wide-open, inclusive dialogue that will certainly lead to many new ideas. The mayor's office could challenge each community to come up with its own priorities for long-term sustainability, affordable housing creation, open space, and transportation. Let the communities speak!

Gotham Gazette: Some people would argue that devising a proposal as sweeping and ambitious as PlaNYC requires a top-down approach because individual communities tend to focus on their own narrow interests rather than those of the city as a whole -- the whole not in my backyard (NIMBY) phenomenon. How can you involve local interests and still come up with a big vision?

Tom Angotti: Alas, if I could be assured that everyone in city government was more committed to the public interest than the city's own residents, I would have to agree. But where is that evidence? In fact, there are many examples where city officials have enacted policies that dump on low-income neighborhoods, many of them communities of color, because they were fearful of confronting NIMBYites in wealthier neighborhoods. In my book, that makes them NIMBYs.

There is also a big difference between NIMBYism and just caring about a better quality of life in your neighborhood. It really is insulting for people in government to paint everyone who cares about their communities as NIMBYish.

Gotham Gazette: This question comes from the Planning Center at the Municipal Art Society. Given the lack of an up-to-date comprehensive planning framework for New York City, how can community-based planners take advantage of the creation of the Long Term Planning and Sustainability Office and/or PlaNYC? Does this offer any tangible opportunities for community-based planners derived from the existence of this new organism/initiative?

Tom Angotti: By all means, PlaNYC should make sustainability planning legitimate. In it, communities can find support for many of their sustainability initiatives that began long ago -- for example the effort to deconstruct the Sheridan Expressway and create open space and affordable housing (see Melissa Checker's ttp://www.gothamgazette.com/article//20080529/210/2535/recent article).

What remains to be done is to create a more open and transparent process whereby community-based and City Hall planners can talk to each other. That is sorely missing because the process is really still top-down.

Gotham Gazette: It seems that the administration has relied largely on rezoning to ensure sustainable neighborhoods and to preserve their character. Does this kind of downzoning address the needs of a growing population?

Tom Angotti: Zoning isn't the answer to all of the complex questions about the quality of the environments we live and work in. Zoning only creates a regulatory framework, and the huge roll of rezonings has created as many development opportunities as it has preservation opportunities.

It seems to me that some of the rezonings are protecting very low-density enclaves in the city, areas where there is potential for much more development. Some of these areas -- because of their low density -- are bigger energy consumers, are auto-dependent and contribute less to long-term sustainability than denser areas.

Gotham Gazette: While much of the plan focuses on emissions from vehicles, as you know, buildings are responsible for the lion's share of greenhouse gas emissions in the city. Beyond city-owned buildings the plan does not have much to say about that. Should New York be doing more in this area? What would you like to see?

Tom Angotti: True, this is a big gap in the plan. A new building code may help, but will not address the vast majority of existing buildings. A few things that can be done (by no means an exhaustive list):

- Promote solar: Reduce the red tape, increase incentives, provide capital, for solar in buildings of all sizes and shapes.

Gotham Gazette: For years, advocates have pointed to the city's overflow sewage system as a source of pollution in our waterways. What can the city do to solve this? Is a total overhaul even feasible given the cost, and how does PlaNYC 2030 address this issue?

Tom Angotti: PlaNYC acknowledges the problem, but its solutions are fairly sketchy and could well be countered by other developments. For example, population growth combined with rainfall increases could yield a more dire scenario. The effect of sea level rise wasn't taken into account either. And even if 90 percent of surface waters are cleaned up -- the plan's quantitative goal -- the other 10 percent could be deadly. Where will that 10 percent be?

Looking to the Future

Gotham Gazette: This is another question from the Municipal Art Society. Rumors have been flying about the possible agenda for the next Charter Revision Commission. Should PlaNYC be made part of the city’s charter?

Tom Angotti: It would be more important for the mayor and future mayors to observe more diligently the mandates for long-term planning already in the charter. PlaNYC could have been presented as a citywide plan and put through the review process outlined in Section 197-a of the charter. It wasn't. That deprived community boards, the City Council and the borough presidents of an opportunity to engage in the process.

I am skeptical that putting more enabling language in the charter by itself will make the executive office care about having a sustainable planning process. More useful would be a series of changes to local law that require the executive to plan in cooperation with other levels of city government. That could be combined with a charter change, but again, by itself, there's no guarantee it will mean anything.

Gotham Gazette: What do you think the plan's likelihood of survival is? And how can New Yorkers who support the plan, or at least parts of it, increase those odds?

Tom Angotti: The next mayor could disown the whole plan. Projects and programs already funded would obviously continue but those are only beginnings in what is supposed to be a 23-year effort.

I think the mayor's office needs some "tough love." It does no good to continue praising the plan for its obvious virtues. Some serious critical challenges need to be raised to the mayor, such as: If you're not around, who is going to do all the things that are supposed to be done? You can't cut community boards and at the same time expect them to carry forward the banners of NYC2030. With all new agency heads in a new administration, where will the plan's supporters be in government?