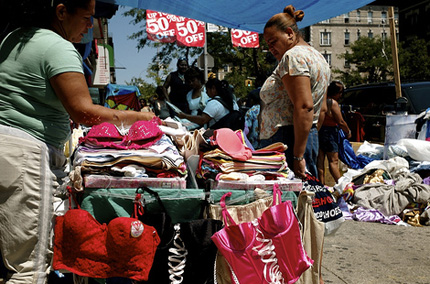 With its four Tony Awards, including the one for best musical, "In the Heights" has not only thrust itself onto New York's radar screen, but also has put its revered neighborhood of Washington Heights, on a high ridge in northern Manhattan, fully on the map.

"I used to think we lived at the top of the world," sings Nina, the hit's lead, as she reminisces about her idyllic childhood uptown, "when the world was just a subway map and the one slash nine climbed a dotted line to my place." She has returned home from Stanford University, where she was lost academically and socially, to find her place again in her old neighborhood. "In the Heights" is about love, family, aspirations, disappointments and finding one's way in a difficult world - all sung and danced by gorgeous young Latin performers to original music, as the set's George Washington Bridge shimmers in the background.

What "Sex and the City" and "Friends" did for Lower Manhattan, "In the Heights" may well do for Washington Heights. That would be useful, because some New Yorkers are not sure what or where it is. Jon Paul Buchmeyer, co-owner of Tentpole, a Midtown public relations and communications firm, said that when he bought a house on 183rd Street "a lot of friends reacted with: Where is that? Is that even in Manhattan? That sounds like the Bronx!"

In fact, Washington Heights - which extends from 155th Street north to Dyckman Avenue and from the Hudson River to the Harlem River - is the ultimate New York neighborhood of dramatic topography (two ridges run north and south along its entire length), admirable parks and open spaces, elegant early 20th century housing stock, renowned cultural institutions, excellent restaurants, diners, food carts and bars, and glorious ethnic diversity. It has magnificent architectural bones, at least in part because the wealthy aristocrats who laid out the Audubon Terrace section of the neighborhood in the early 1900s deliberately designed buildings, streets and public spaces to attract households from the Upper East Side. By the time of the Great Depression, handsome apartment houses had already been built, and important institutions - including Columbia-Presbyterian Medical Center and Yeshiva University - had opened. Though it became one of the city's most successful immigrant neighborhoods in the 20th century, Washington Heights had the housing stock and institutions of the wealthy-not the tenements of, say, the Lower East Side, built for the poor.

A Neighborhood of Immigrants 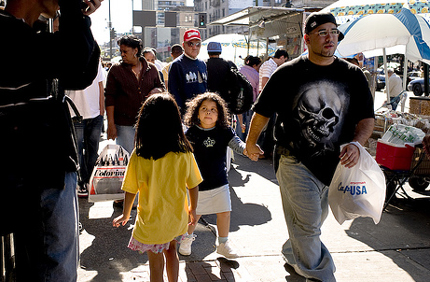 Primarily Dominican today, Washington Heights has hosted nearly every immigrant group - Irish, German, Jewish, Italian, Puerto Rican - welcoming, absorbing, and transforming its residents. "The word diversity is beaten to death," said Andy Linares, who grew up in Washington Heights and who now owns Bug-Off Pest Control Center, which he says is the largest supplier of pest-control products in the city.

[To read about the current race for State Assembly from Washington Heights, see "A House Divided."]

"But this neighborhood was always diverse," he continued. "Everybody worked together. There was no predominant group. We shared each other's culture. We celebrated Italian holidays and hung out with the Irish kids. Now we're seeing an influx of people from other areas of the city. Great! Fine with me so long as they're going to be invested in the neighborhood and make it better."

Buchmeyer agrees. Having moved to Washington Heights from the East Village, he recalled briefly worrying about missing that area's hipster hangouts. But now, he said, "what appeals to us are the little mom and pop places, like La Cabana Salvadorena, up the street, owned by immigrants from El Salvador, or La Caridad, our local diner, which shows up in 'In the Heights.'"

On a beautiful weekend afternoon both are packed with customers - several stand outside Salvadorena on Broadway and 187th Street eating pupusas, golden-brown corn cakes filled with pork and cheese, costing $2. Upscale restaurants like Hispaniola at One Nagle Avenue are also doing well, relying on word of mouth and repeat customers. Owner Rolando Lantigua says that while Hispaniola is a little expensive for the area, about 65 percent of its customers are local while the rest come from Westchester and Rockland Counties.

Latin immigrants - who brought Washington Heights back to life after the dark, dangerous days of the 1970s - have stamped their own ethos on the neighborhood, which is stuffed with retail shops, boutiques, salons and vendors. The streets teem with customers spending money. Indeed, upper Broadway may well be Manhattan's most vibrant commercial street, still lively well into the evening.

Can Everyone Live in Peace?

Now that Washington Heights is becoming a destiny of choice for young people trying to move to New York as well as for households priced out of the West Side, can all the residents live in peace?

Lucie Bilbao, who owns Lucie's House of Beauty on 183rd Street and Andy Linares' mother, hopes so. "A lot of American young people are moving in, artists and writers," she said. "They're very nice. A few are starting to come by. But they don't like to take care of the face as much as Dominicans do."

Jeffrey Gardere, a part-Haitian and part-Dominican real estate broker with Corcoran who grew up in Washington Heights, said he tells newcomers, "You have to reacclimate yourself and understand the culture of the new neighborhood. If you want the best cafĂ© con leche, we have it. Or the best seafood spiced up with rice and beans, come up here. And while we don't have Whole Foods, we have fresh foods-the best possible fruits and vegetables that you can buy off the stands on the street."

He believes that Washington Heights real estate offers Manhattan's premiere bargain. The handsome buildings on Riverside Drive, like the Rivera and the Grinnell, have apartments that are some 40 to 50 percent less than comparable apartments 70 blocks south on the Upper West Side. A seven-room co-op in mint condition in the Rivera, for example, is listed at $1.195 million. A four-room apartment in excellent condition at 930 St. Nicholas Avenue is listed at $429,000.

Will prices stay relatively low? Probably not over the long term, but yes in the short run, since many buyers fleeing high Upper West Side prices will turn to Harlem before heading further north to Washington Heights.

Meanwhile, the characters of "In the Heights" worry about the woes of gentrification and ever rising real estate values. "Our neighbors started packin' up and pickin' up and ever since the rents went up it's gotten mad expensive," sings Usnavi, the stand-in for the playwright. "But we live with just enough."

Planner Alex Garvin who, as a housing official in the Beame and Koch administrations oversaw the city's neighborhood preservation programs in the 1970s, argues that "immigrant succession patterns is what New York is all about." The Dominicans are not being pushed out, he says, any more than the Greeks were before them. As Dominicans move up economically, many will move to more prosperous areas, including the suburbs, while others will stay, investing in their businesses and residences.

"It's my view," said Garvin, "that you can't predict population movements accurately. Too many factors are involved, including what happens to Dominican immigration. What's important is that the neighborhood remain a welcoming place for immigrants."

In the musical, crime is minimal-a minor break-in and a little graffiti. Even the graffiti turns out to have been done by a true artist-and one with a generous spirit.

Crime in the real neighborhood, however, is more complex. Wracked by drugs in the 1970s and 1980s, Washington Heights started to emerge from the nightmare of violence in the early 1990s with the waning of the crack epidemic. And while violent crime is down roughly 80 percent since 1993, it is by no means gone. Washington Heights's 33rd Precinct has had 10 rapes reported so far this year-double 2007's 5 rapes.

Robberies are up to 101 from last year's 92. There have been no murders, as opposed to 3 in 2007. Its adjacent 34th Precinct, also in Washington Heights, has had one murder so far this year, as it did last year, and 11 rapes, as opposed to 10 in 2007. The 34th's robbery and felonious assault statistics are almost identical to last year's, and grand larceny is up about 25 percent.

Linares, however, finds "In the Heights" a little annoying. One of the plot lines is about the neighborhood beauty who is eager to move up by moving downtown. "Why would she want to do that?" Linares asked. "This neighborhood is about people wanting to move in, not out."

Ultimately both the beauty and Usnavi stay, prompting Jon Paul Buchmeyer to note that many Dominicans have been making that same decision. "What's cool and authentic," he said, "is that neighborhood change and improvement is coming from third generation Dominicans like Usnavi, who decides to stay and redo his shop. They're investing and reaping the benefits of the great neighborhood they've created."