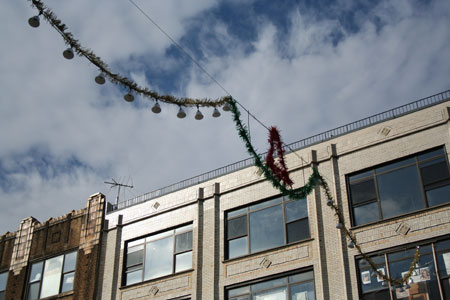 Holiday cheer seemed to echo across the country Friday when the U.S. Census Bureau announced retail sales had increased 1.3 percent in November compared to the previous month.

Strike up the carols, it seems like the holiday season has arrived.

But here in New York, storeowners are not celebrating so quickly. From Jamaica, Queens to Melrose in the Bronx, storeowners say they have yet to see eggnog-fueled shoppers, craving holiday deals and discounts.

Small business owners compare their customers to characters in a Charles Dickens novel -- invoking the image of Scrooge rather than Santa.

Gloria Anderson, a resident of the South Bronx for "forever" and a great-grandmother, isn't buying presents for her adult children. While perusing nightlights at Youngland in the Bronx, Anderson said she is focusing solely on her three great-grandchildren and four grandchildren.

"I'm trying to," said Anderson when asked if she was cutting back. "I'm only buying for the children."

Because of this frugality, storeowners throughout the city are bracing for a bad holiday season that might force some of them to close their doors.

But maybe the city can do something to help?

Mayor Michael Bloomberg has made it a hallmark of his tenure at City Hall to try to create commercial hubs in every borough -- like in Jamaica and the South Bronx.

Gotham Gazette visited several of these commercial strips to see how small businesses and shoppers were holding up this holiday season. We asked what they think should be done to bring them holiday cheer. See our slideshow, Sour Holiday to find out what they said.