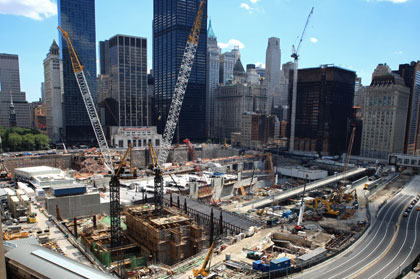 On the seventh anniversary of 9/11, the public hand-wringing about delays in the rebuilding effort offers yet the latest evidence that short-term thinking remains the standard operating procedure in government. Now Merrill Lynch has backed out of talks that would have make the firm an anchor tenant at the trade center site, again calling into question the development timetable.

The demands to produce speedy results at ground zero have been, in fact, part of the problem, not the solution. The cry to get back to business as usual drowned out saner calls for deliberative action. The haste to rebuild was justified as defiance of terrorism, a memorial to the victims, crucial for the local economy, and essential for the welfare of everyone in lower Manhattan. Calls for long-term planning were dismissed as foot-dragging and worse - even downright unpatriotic. Paradoxically, the rush to develop is one reason things are taking so long.

Timetables based on the notion that such a large and complicated project could be planned and built in less than decade were overly optimistic. Anyone familiar with real estate development in Manhattan knows that developing any 13-acre site easily can take five to 10 years. A glance at the history of the original World Trade Center would show that it took over 10 years to build the twin towers (and more than 15 years from the unveiling of David Rockefeller's Lower Manhattan Plan in 1958).

This site presents an array of complexities of beyond building10 million square feet of office and retail in lower Manhattan. The site needed clearance and environmental remediation, negotiations had to be held leaseholders, insurance claims needed to be settled, and the transportation infrastructure rebuilt. At the same time, officials had to address the concerns of the families of 9/11 victims. Meanwhile changing conditions in the office and financial markets had the potential to detour the best-made plans. 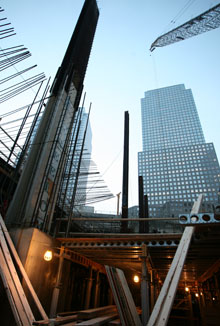 People from all over the city wanted to debate what should be done before the city and state moved ahead full steam with the first proposal that came to mind. In the first year after 9/11 there was a vibrant public dialogue about rebuilding plans. Several major coalitions and alliances of civic, professional and community groups raised serious concerns and put forth detailed programs and proposals. These included the Civic Alliance to Rebuild Downtown, a coalition of more the 80 groups convened by the Regional Plan Association; NY New Visions, a coalition of 16 architecture, planning and design groups; Imagine NY, a project of the Municipal Art Society that held some 230 workshops, the Labor Community Advocacy Network; several groups in Chinatown, and more. There were also several organizations of families of the victims.

This civic chorus, perhaps one of the most widespread examples in New York City history of a popular desire to have a say in planning, was allowed to fade away. Then-Gov. George Pataki emphasized the need to move ahead with all deliberate speed. To do this he set up the Local Manhattan Development Corp. as a subsidiary of the Empire State Development Corp., ostensibly to expedite planning and management of the project by avoiding New York City's land use and zoning laws. To further expedite matters, Pataki appointed an LMDC board of directors top-heavy with executives from the financial community, though he was later pressed to appoint some board members recommended by the newly installed Mayor Michael Bloomberg. The LMDC cut short, narrowed and diminished the debate, but the unresolved questions raised in the public arena would come back later to stall the rebuilding effort.

Within months of its creation, and without competitive bidding, the LMDC commissioned a plan for rebuilding ground zero that basically put 11 million square feet of office space on the World Trade Center site. The agency released the plan in spring 2002 and was greeted with a fairly widespread thumbs down from the press, civic and professional organizations. Some 5,000 participants in the July 2002 Listening to the City assembly at the Jacob Javitz center voted against the plan, forcing the LMDC go back to the drawing boards.

The LMDC could have patiently considered the complex issues raised in the public discussions. Instead, in its rush to rebuild, the agency made some minor adjustments it felt addressed public concerns and immediately went ahead with the development of a new rebuilding program, calling for a slightly downsized office development with a memorial. The development corporation announced an international competition to come up with the design.

While the new program clearly represented a step forward, it diverted public attention from the big issues to discussion of the individual designs. With the selection of the finalists in the competition, the discussion over aesthetics drowned out the voices calling for a greater priority to the memorial, more residential space and more integration with the surrounding neighborhoods.

There then ensued a tense and time-consuming struggle over the design by architect Daniel Libeskind waged by developer Larry Silverstein, who eventually managed to exchange the Libeskind plan for a new arcade of office towers designed by other architects. But this only occurred after expensive and time-consuming conflicts and lawsuits over everything -- the program, the design, the memorial.

The calls from Chinatown and the Lower East Side, and labor and immigrant communities for a more inclusive planning process and reordering of priorities were barely heard. The LMDC's short-term thinking had won the day.

The back-to-work philosophy was responsible for more than just a problematic timetable for rebuilding. It also led to the unnecessary exposure of many rescue workers, lower Manhattan residents and office workers to toxic fumes and dust. The long-term effects of this short-term thinking on human health have yet to be fully understood (see related story). 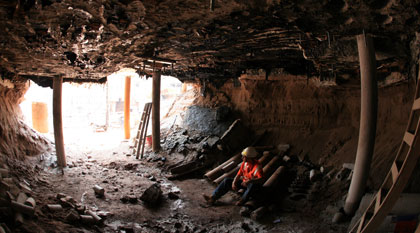 The City Goes Along

Before he took office in 2002, Mayor Michael Bloomberg aid he saw no need to establish a separate authority to redevelop ground zero. He was also highly critical of large-scale development in lower Manhattan, favoring instead development in Midtown, including the ill-fated Jets stadium and massive rezoning.

Soon after his inauguration, though, Bloomberg dropped his opposition, apparently in exchange for promises by the governor that he could appoint some members to the LMDC. The mayor's deal with the governor led to an informal arrangement where the state take the lead on the rebuilding of lower Manhattan and the city would take charge of Midtown. City Hall also issued a broad strategic plan for lower Manhattan that included some of the elements called for by the local community board and civic groups, such as a park and green market. This provided a broader planning context for the rebuilding plan. But the process was backward: The plan for the WTC site was done first, without any close integration with the diverse communities in lower Manhattan. Then these other elements were added.

When Bloomberg forfeited jurisdiction over the site, he handed to the LMDC the powers for land use review, denying many people a say in the process. If the city controlled the rebuilding, it could have submitted the plans for approval under Section 197-a of the city charter, the designated path for all official plans. The city's Uniform Land Use Review Procedure (ULURP) would have let at least one community board in lower Manhattan, the Manhattan Borough President, the City Planning Commission, and the City Council an opportunity to hold a public hearing, deliberate and vote on the plan. They would have been able to review and comment on the environmental impact statement.

That all might have seemed slower, but who knows what longer-term problems we might have avoided in the process.