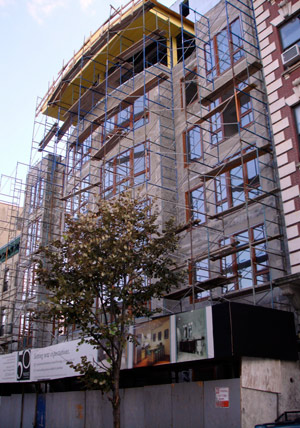 Even as the housing market falters in much of the nation, houses and apartments in New York City remain expensive. A relatively modest condominium in a prime neighborhood can go for more than a million dollars, making it difficult for many New Yorkers who do not have that kind of money to find a suitable home.

Why is housing so expensive in New York City? There are a number of reasons, but one, often overlooked, is that it costs so much more to build here than in other cities. Moreover, the difference has grown even more marked as the cost of residential construction has increased rapidly in the past five years. As documented in a recent study by economist Rosemary Scanlon, commissioned by the Manhattan Institute, rising costs, driven by steep increases in the costs of materials, land and labor, and the delays and resulting high costs of the local permitting and regulatory process, pose a serious threat to constructing housing that is affordable for low- and middle-income New Yorkers.

Since 2003, these costs have been rising as much as 1 percent each month, as global demand caused material prices to soar, while the city's boom in construction made it difficult to find skilled contractors and labor and pushed up land prices throughout the five boroughs.

The current scarcity of available capital further threatens continued construction of housing that is affordable to New York households. The year-long credit crunch has made it harder to get construction loans as well as individual mortgages. In addition, dramatic changes have been made to the city's 421-a tax abatement program for housing, and while the full impact remains to be seen, several developers of affordable housing have publicly expressed deep concerns over possible adverse effects.

Adding Up the Costs

Costs of building materials have been rising rapidly since 2003, driven by strong growth in Asia and other emerging economies around the globe. In New York City, the current boom in construction has contributed as well. Labor costs, which have long been higher in the city for the unionized trades, are being pushed up by strong demand and overtime, which has also strained the capacity of available contractors and subcontractors.

Construction of offices and hotels, along with condos and co-ops, has used much of the available land, driving up land prices in Manhattan's central core. But not just there. Land has grown in value in northern Manhattan and the other boroughs, particularly Brooklyn and the Bronx. For example, land in downtown Brooklyn that sold in the range of $70 per square foot in early 2005 was selling for around $250 per square foot by mid-2007. Citywide, increases in land prices are now the single most important factor in the cost of building housing.

The city's housing situation, both on the demand and supply side, remains an exception to patterns in many other cities and regions of the U.S., as prices still are increasing here and demand for housing remains intense.

Population growth since 2000 and the strong post-2003 economy have put additional pressure on New York's already scarce housing supply. The demand is reflected in the number of building permits issued for residential construction - up from levels of 15,000 units per year in 2000, 2001 and 2002, to 30,000 units per year in 2005, 2006 and 2007. Demand has pushed up prices for condominiums, co-ops and rentals in Manhattan and Brooklyn. Rents in stabilized buildings have continued to rise as well.

However, fewer building permits were issued in the early months of 2008. Some local experts contend this drop-off reflects heightened activity in 2007 by housing developers hurrying to file for permits before changes in the 421-a tax abatement program went into full effect this July 1. Data on building permit activity in the last months of the year will give a better indication of whether this cooling off is temporary, or a delayed response to national trends.

After a brief easing during 2007, some material costs are again increasing steeply. Prices for steel and steel products rose 15 percent nationwide from August 2007 to August 2008. The sharp increases in oil prices in the first half of 2008 drove up costs of transportation as well as petroleum products, including an increase of over 11 percent in the price of asphalt products.

These trends affecting the cost and price of housing come at a time when the inflation-adjusted incomes of most New Yorkers have failed to show real gains. The rise in local inflation - over 25 percent since 2000 - has been greater than the increase in median household incomes. And housing costs in the same years have risen even faster than the rate of inflation-on average by 33 percent. Thus New York's crisis in housing affordability is a function of available income as well as the cost of construction.

What Can Be Done?

Since national and international trends determine many of the cost components, it is necessary to focus on what City Hall and Albany can influence.

* Reduce delays in construction time, and thus cost, by streamlining the city's regulatory and permitting processes. Opportunities include processing and issuing permits in parallel rather than sequentially and improving inter-agency coordination (e.g. between Department of Buildings and the Department of Transportation). Many inefficiencies contribute nothing to the safety of workers and the public (and perhaps detract from it, in creating confusion) while adding time and expense to the process. Having related permits from buildings and transportation expire simultaneously with project insurance, for example, would reduce developer headaches and expense without changing safety requirements.

* Increase the supply of buildable land by continuing the Bloomberg administration's progress in rezoning old industrial land and upzoning areas that could support greater residential and commercial density. Areas near subway stations outside of Manhattan's central business district could support greater density. More land could also be made available for housing by changing the regulations that require housing developments outside central Manhattan to provide parking spaces on-site. Similarly, eliminating requirements for on-site garage space could save $30,000 to $50,000 for each space not built.

In addition, costs of building affordable housing can be held down by using non-union labor. Currently, some contractors use union labor and others use non-union; often there is a mix. Developers make project-by-project decisions about which way to go, as union labor in certain specialized fields is efficient enough on some projects to offset higher wages and generous benefits and work rules. But construction unions are now lobbying city and state lawmakers to require "prevailing" (i.e., union-equivalent) wages on housing built with public subsidies. To foster building for all price ranges and income levels, it is essential that the city and state keep the non-union option available, especially for affordable housing outside the Manhattan central business district.

High rates for liability insurance also add to the burden of building costs in New York City. One major reason is New York State's Scaffold Law, a century-old piece of legislation that imposes absolute liability on the builder or owner if a worker falls from a scaffold or bridge, regardless of whether that worker has been negligent. New York State is the only state in the nation that has not adopted the provision of comparative liability. This discourages new insurers from entering the New York market and keeps premiums up.

The shortage of affordable housing is a multi-faceted problem, and no silver bullet can solve it. But there are some things the city and state can to do to improve the situation, notably common-sense streamlining along with expansion of the supply of land, contractors and even insurance providers. The state and city governments need to take those actions now if New York City is going to continue to be home to people of all incomes, occupations and backgrounds.

Rosemary Scanlon is a consultant in urban and regional economics as well as an associate professor at the NYU Schack Institute of Real Estate. Hope Cohen is deputy director of the Manhattan Institute's Center for Rethinking Development. Â