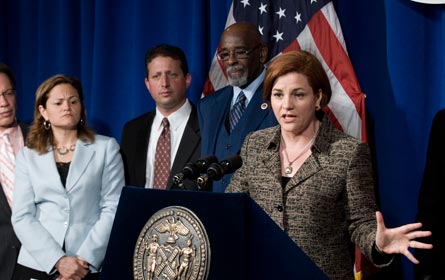 The bill, passed at yesterday’s stated meeting, highlighted the brewing conflict between powerful members of the City Council and the mayor’s office over the role of the government in the economy.

Mayor Michael Bloomberg said the banking bill was unrealistic. "Nobody would argue, I would think, that the city has the expertise or the resources to try to regulate the banking industry," he said. "It is just ridiculous.”

Some of the country’s largest banks, including JPMorganChase and Bank of America, are currently designated as depository banks by the city. Several other cities have enacted or are considering similar ordinances. The Los Angeles City Council passed its own so-called “responsible banking” act yesterday.

New York City Council Speaker Quinn said the bill was not aimed at creating a local regulatory framework. Instead, it was about making sure banks “act in a transparent way” and report information to the city of New York on what banks are doing to help neighborhoods and small businesses.

Councilman Albert Vann, the main sponsor of the bill, said lawmakers spent the last two years working on it and had consulted with the industry. “It is not an anti-bank bill,” he said. “Our objective in pursuing this legislation was to create a process that better informs New Yorkers about the banking needs of the neighborhoods and how to begin to meet those needs,” he said.

The bill passed by the council, which the mayor has threatened to veto, would create a new eight-member Community Investment Advisory Board that would collect and assess information from banks on their lending practices in local neighborhoods.

Supporters of New York City’s banking bill, including Quinn’s previous employer, the Association for Neighborhood and Housing Development, argue it will help policymakers make better decisions about where the city’s money is deposited and encourage banks to invest in communities.

Currently, the Department of Finance, which has also objected to the bill as too burdensome, oversees the city’s money, in conjunction with the city comptroller and the Banking Commission. The commission approves or denies applications from financial institutions seeking to do business with the city.

The City Council also sparred with the mayor over its decision yesterday to override his veto of a “prevailing wage” bill that would raise the wages earned by some workers employed by companies that receive city subsidies.

“In this day and age, this is not appropriate legislation if we want to get companies to come here and build this city,” he said yesterday. His administration has vowed to sue to stop the law from being enacted.

City Council Speaker Christine Quinn said the prevailing wage legislation was reasonable. "The vast majority of us at the City Council believe that when businesses decide of their own free will to take city subsidies or take a high level of city tenants, it is appropriate for us to put a fair additional wage requirement on them,” she said before the council voted to override the veto.

The Council also passed two resolutions at the stated meeting: one calling on the state Legislature to pass a law increasing the minimum wage from $7.25 to $8.50 an hour; the other appealing to Village Voice Media to reject adult advertisements on its Backpage.com website after allegations that sex-traffickers have been using it.