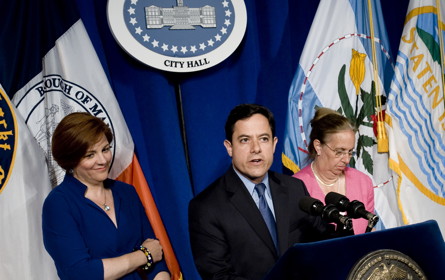 Editor's Note: This version has been updated to clarify that the Department of Investigation had opposed an earlier draft of the bill.

Legislation passed by the Council at its stated meeting yesterday would extend protections against retaliation under the current city Whistleblower Law to employees of contractors and subcontractors. Currently, the law only protects city workers.

At a news conference held before the vote on the legislation, City Council Speaker Christine Quinn called whistleblowers “courageous individuals who often end up being the most important source for uncovering fraud and corruption.”

The bill to expand the Whistleblower Law, which would apply to contracts worth over $100,000, was one of three pieces of legislation passed by the Council that would expand protections for workers who report corruption and encourage others to do the same. The bill was authored by Councilman Daniel R. Garodnick, of the 4th District, in Manhattan.

The second bill would require city contractors to post information about whistleblower protections and instructions on how to report misconduct or fraud. The third would renew the city’s False Claims Act, which offers whistleblowers proceeds of funds recouped from successful corruption prosecutions if they report information about potential fraud. All three bills would need to be signed into law by the mayor.

Citizens Union, which publishes the Gotham Gazette, lobbied for the legislation.

The city’s Department of Investigation, which investigates allegations of city-government misconduct including complaints brought by employees of private contractors, opposed an earlier version of the bill because it would have mandated that DOI investigate every complaint of retaliation by private contractor employees.

At a hearing on April 16, DOI said such a requirement would likely lead to "an avalanche of mandatory investigations” that it did not have the resources to address.

The final version of the bill allows DOI to investigate the initial claims of fraud, but does not require the agency to investigate allegations of retaliation. Instead, the person alleging retaliation would be able to file a lawsuit.

The city’s False Claims Act has been used “relatively infrequently since its enactment in 2005,” according to a report by a Council committee that convened April 16. Of 23 civil complaints under the FCA since 2005, the city Law Department decided not to pursue any action in 17 cases. Thirteen of the 17 cases were declined because they involved Medicaid funds, the report said. Under federal law, any recovered funds would go to the state, not the city.

“As the law gets better known â€¦ more people will use it,” said Councilwoman Gale Brewer, the chair of the government operations committee, which released the report.

Councilman Garodnick, who attended yesterday's news conference and authored the bill requiring contractors to post notices at job sites about whistleblower protections, said if passed it would go a long way toward informing people about the False Claims Act.