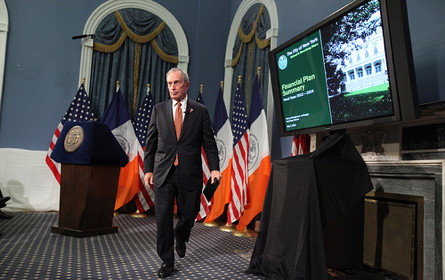 NEW YORK â€“ The Campaign for Children, a coalition that came together this year to fight millions in proposed cuts to public funding for child care and after school programs, has been holding budget vigils on the steps of City Hall since the beginning of June.

It is the kind of scene typical of the “budget dance” that goes on this time of year, when the City Council and Mayor Michael Bloomberg’s administration negotiate the city’s spending priorities for the next fiscal year -- and advocates rally to bring pressure on policymakers to spare their programs from being cut.

An agreement on the budget could be announced as early as today, though the sticking points between the two sides have been significant: besides proposed cuts to child care and after school programs, 20 fire companies could be closed and funding for libraries slashed.

“You plan on doing everything that you like to do, and then the reality brings you back, and then you do only part of what you would like to do,” Bloomberg said during a news conference May 3 to announce his proposed $68.7 billion executive budget.

A new budget must be in place by July 1, the beginning of the fiscal year.

Katherine Eckstein, the director of public policy for The Children’s Aid Society and a member of the Campaign for Children, said the cuts being proposed by Bloomberg would be devastating for child care and after school programs that families depend on.

“These cuts are affecting New Yorkers who are already struggling,” she said recently while standing on the steps of City Hall.

The mayor then responds with his executive budget, which is followed by another round of Council hearings that ended this year in early June. Then negotiations begin, steered by the budget teams of both sides, culminating in an agreement and vote by the Council.

The Council has the authority to restore some funding cuts proposed by the mayor for one year at a time.

Doug Turetsky, of the Independent Budget Office, said the process directs “the Council's attention to restoring funds for existing programs that the mayor knows are very popular in the council member's neighborhoods. So they have less ability to focus on maybe some new initiatives that they want to undertake.”

Maria Doulis, the director of city studies for the Citizens Budget Commission, said it also keeps the city from debating structural changes to municipal fiscal policy.

“Instead of looking at restoring some of the spending on these programs for one year, the Council should really focus on spending items that are growing at a fast pace," she said, adding that the city’s capital spending and health insurance costs in particular should be scrutinized.

For their part, the mayor’s office and Council point to on-time budgets in recent years to demonstrate that the dance, while imperfect, does the work.

The mayor’s executive budget closes a $3.6 billion fiscal year gap with one-time sources of funding, including $466 million from the CityTime fraud settlement and $1 billion in anticipated sales of taxi medallions to expand hail service to the outer boroughs.

It also redirects $1 billion from the Retiree Health Benefits Trust, meaning future taxpayers will have to float the cost of retiree health benefits.

Budget experts have warned the decision to rely on the one-time sources was risky.

The sale of the medallions has been held up in court. Earlier this month, a state judge agreed to an injunction after yellow taxi fleet owners sued, arguing that the plan violated the state constitution because it was passed in Albany instead of in the City Council.

Bloomberg said at the time of the judge’s decision earlier this month that the consequences of not receiving the expected revenue from the sales of taxi medallions would be “very serious.”

There are other risks to the budget. Experts have highlighted that while the city has regained jobs lost during the Great Recession, the city’s reliance on the financial sector could pose a danger given the economic uncertainty in Europe. The city’s comptroller office called the European debt crisis “a primary threat to both the U.S. and local economies.”

Upon the release of the mayor’s executive budget, the Council said it was particularly worried about cuts being proposed to city-subsidized child care and after-school programs.

The Campaign for Children said 47,000 children would lose access to the programs under the cuts, particularly in neighborhoods with high rates of poverty, unemployment and obesity.

Speaker Christine Quinn, in a statement at the time the executive budget was released, calling the cuts “unacceptable” and that they were “being implemented in ways that create tremendous disruptions for families, communities, and providers.”

Turetsky, of the IBO, said that even though the programs are perennial losers in the budget, this year would be particularly complicated because the are undergoing structural changes.

“The cost per kid would be higher under the new format,” he said. “Even if the funding gets restored, it's not clear you would have the same number of kids being able to take advantage of the programs.”