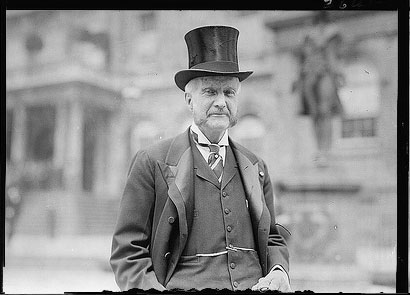 Photo from the Library of Congress
Henry Clews, a wealthy Wall Street financier and economic consultant, in 1910

Since the economic collapse in the fall, Americans have acquired a taste for watching CEOs squirm. They lapped up the scenes of executive sweating before Congress while being grilled about multimillion dollar bonuses and cheered in knowing their outrage had forced the heads of the major American car companies to abandon their private jets and drive to D.C. for congressional hearings. There's even a Brooklyn artist, Geoffrey Raymond who takes his portraits of CEOs to Wall Street to let passersby scrawl nasty messages on them.

So, not surprisingly, polls suggests that raising the income tax on the wealthy, popularly known as a Millionaires Tax, has strong support. Quinnipiac polls have found a steady 80 percent of New Yorkers in favor of such a tax hike. Labor and education groups are pushing hard for it using television campaigns and grassroots initiatives. With such strong popular support, a Millionaires Tax seems imminent.

Some legislators seem to have gotten the message. The Assembly is expected to vote to increase the tax on affluent New Yorkers. Assembly Speaker Sheldon Silver has stated that he won't "allow the burden of addressing the economic crisis to fall disproportionately on the backs of our already overburdened working families."

Yet, the plan has not attracted the support of a majority of senators, and despite some indications he might compromise, Gov. David Paterson still officially opposes the tax hike, preferring a mixture of budget cuts, some new taxes and increases in other taxes, such as the sales tax.

Although a number of different proposals for a millionaire tax have been discussed the most popular is the Fair Share Tax Bill that has been supported by advocates such as the Working Families Party and put forward in the Senate by Sen. Eric Schneiderman on Feb. 9. The Fair Share Tax Bill would increase the current 6.85 percent income tax rate to 8.25 percent for individuals who make more than $250,000 a year. Those making more than $500,000 a year would see their income tax rise to 8.97 percent, and those making more than a million a year would be taxed 10.3 percent. Currently everyone making over $40,000 a year -- from a schoolteacher to Michael Bloomberg -- pays the same 6.85 percent income tax rate.

Schneiderman's proposal was co-sponsored by 18 other senators. However, Senate Majority Leader Malcolm Smith opposes raising the tax rate for the wealthy. Smith, who previously called the measure a "last resort," said he believes such a tax would drive more affluent residents out of the state.

"During difficult economic times the senator is not in favor of raising taxes as a revenue generator," Smith's spokesperson, Austin Shafran, said. He added, however, that since there is support for the measure in the Democratic caucus, Smith will not stifle debate of the issue. "This fair share tax proposal will be openly and honestly debated on the floor of the Senate," he said.

Paterson has echoed Smith's sentiments, agreeing that a tax increase on the rich would be a "last resort." But with flagging poll numbers and public opinion heavily in favor of such a tax, spectators wonder if Paterson is wavering on the issue. At a banquet hosted by the State Association of Black and Puerto Rican Legislators last week Paterson said, "To those of you who are not here, who think you are too wealthy or too influential or have too great of a title to be part of New York's budget-balancing formula, let me make you aware that every New Yorker will share in the sacrifice to get this budget balanced." Paterson spokesperson Errol Cockfield reportedly told reporters afterward that Paterson's statement did not reflect a change in position.

Critics of the tax such as E.J. McMahon, director of the Empire Center for New York State Policy, said that unions representing public employees advocate the millionaires tax because they reject what he views as reasonable cuts to address the budget crisis, such as postponing increases in wages or benefits.

"The top one percent paid 40 percent of the taxes in the state in 2007," said McMahon. "People with a pie slice view of the economy think, 'Hey, if we jack up the rate 50 percent the rich won't notice it.' They think, 'Oh they have money! Let's get it.'"

According to McMahon, the state has relied on taxing the wealthy for too long. He noted that the reason there is such a budget gap this year is because the state got a large percent of its revenues from Wall Street and those revenues have plummeted. An increased tax on the rich, who have already lost great amounts of their wealth due to the market crash and who have "volatile" incomes is not a smart way to patch the budget deficit, he said.

Karen Scharff, executive director of Citizen Action, a group that strongly advocated Fair Share Tax Reform, disagreed. "It comes down to whether we should ask wealthy New Yorkers to pay a small amount in additional taxes to protect average New Yorkers facing job losses, foreclosures and school cuts," she said.

Scharff said that if one percent of New Yorkers paid 40 percent of the taxes that's because "they have 40 percent of the income in the state." As she sees it, tax rates on the rich have steadily been reduced for years and a small increase now is "only fair."

Schneiderman said his bill is not simply the product of unions but is supported by a "state wide coalition." He acknowledged that there will have to be cuts in the state budget but called his tax proposal "fair and a good way to raise money." It is time, he said, to stop "redistributing wealth from the working family to the rich," and with President Barack Obama having campaigned on the idea of a progressive tax, Schneiderman said he thought the mood is right to return a progressive tax to New York.

In the end, Scharff said, she expects to see Schneiderman's proposal taken into consideration during budget negotiations between the Senate, the Assembly and the governor. She thinks Smith and Paterson will bow to public pressure on the proposal and will change their stance.

In Schneiderman's view, New York's politicians have a history of "crying wolf" and suggesting cuts before ultimately restoring the spending because of public outcry. He said Paterson has been trying to hammer home the gravity of the situation by stressing the need for major budget reductions, but in the end Schneiderman thinks a tax increase on the wealthy will be part of the solution to New York's $14 billion dollar budget deficit.

The Opposition in the Senate

Given the Democrat's thin majority in the Senate, Smith's position may hinge somewhat on his members. Senators Jeff Klein and Pedro Espada Jr., who represent middle class and working class districts in the Bronx, have stood, along with Smith, in the way of the millionaire's tax as well as rent control laws that would benefit their constituents. "What Smith, Klein and Espada won't acknowledge is the tiny percentage of households in the city that earn $1 million a year, or even $250,000, after taxes," Juan Gonzalez wrote. "State records show a mere 393 households in Smith's Queens senatorial district reported incomes above $250,000 in 2005. More than 93,000, or 99.6 percent, were below that figure."

Scharff said that organizations like hers that helped the Democrats win their majority in the Senate will pay attention to where these senators' allegiances lie. She thinks most voters will pay attention as well. "I find it very puzzling that New Yorkers overwhelmingly voted for Obama and his progressive agenda, they sent a message to politicians and voted for change and yet somehow in New York it feels like we are going backward," she said. "New Yorkers won't allow it."